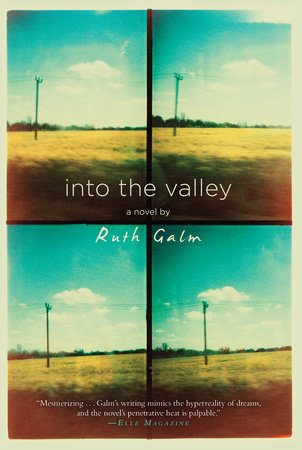 About Into the Valley

Ruth Galm’s spare, poetic debut novel, set in the American West of early Joan Didion, traces the drifting path of a young woman as she skirts the law and her own oppressive anxiety.

Into the Valley opens on the day in July 1967 when B. decides to pass her first counterfeit check and flee San Francisco for the Central Valley. Caught between generations and unmarried at 30, B. doesn’t understand the new counterculture youths. She likes the dresses and kid gloves of her mother’s generation, but doesn’t fit into that world either.

B. is beset by a disintegrative anxiety she calls “the carsickness,” and the only relief comes in handling illicit checks and driving endlessly through the valley. As she travels the bare, anonymous landscape, meeting an array of other characters—an alcoholic professor, a bohemian teenage girl, a criminal admirer—B.’s flight becomes that of a woman unraveling, a person lost between who she is and who she cannot yet be.

Ruth Galm was born and raised in San Jose, California, earned an MFA from Columbia University, and has lived in San Francisco ever since. Her short fiction has appeared in Kenyon Review Online, Indiana Review, and Joyland, and she is… More about Ruth Galm

Praise for Into the Valley

“Galm, in a similar fashion to Doris Lessing’s The Golden Notebook, has powerfully captured a woman’s righteous resistance in the face of a rapaciously gendered society.”
—KQED Arts

“Galm’s writing here is vivid, and heavily atmospheric, with a derelict moodiness that draws the reader, too, into B.’s gradually oppressive carsickness.”
—Los Angeles Magazine

“Ruth Galm’s hyper-vigilant and engrossing debut novel, Into the Valley, is both unsettling and, ultimately, victorious. From this novel’s simple opening sentence  to its concise, shocking and surprising conclusion, it is a gorgeous, lyrical meditation… brilliantly drawn.”
—Cincinnati CityBeat

“Into the Valley is highly visual, suspenseful and appropriately grim. Galm’s prose knows exactly where it’s going, crisp and clear, it touches down lightly, like a small stone bounding down a scree slope . . . A solid, muscular piece of writing. It is skillfully whispered social commentary.”
—High Country News

“An understated novel that explores the quiet but powerful emotions of loneliness and revelations that flow from losing one’s way.”
—Shelf Awareness

“This is a natural for anyone who loves Joan Didion’s work—especially her nonfiction critiques on California and that other classic of aimless driving, Play It as It Lays.”
—Booklist, Starred Review

“Galm’s writing is rich and evokes the desolation of the Central Valley and B.’s mental state. Readers [will] appreciate Galm’s fantastic writing and the new view of an overexposed slice of American history.”
—Kirkus Reviews

“An existential meditation, ripe with symbolism and open for interpretation.”
—Library Journal

“In the luxury vehicle of her hypnotically evocative prose, Ruth Galm takes us on the journey of the mysterious B., suffering from a mysterious malaise which can only be relieved by forging checks in cool, neutral banks. Like Joan Didion’s Play It As It Lays, Into the Valley creates and recreates a wasted American landscape, and pulls us into a world whose emptiness has profound moral and social implications.”
—Mary Gordon

“Into the Valley is at once gorgeous and restrained; the character is herself a kind of vivid, shifting landscape, just as the landscape is itself a beguiling, dominating character. The result is an intensely emotional and human novel.”
—Rivka Galchen, author of American Innovations

“I reveled in a delicious state of unease reading Into the Valley, the parched atmosphere leaving me as dizzy as the protagonist, perfectly and simply known as ‘B.’ An enthralling, disturbing read, part Joan Didion and very much Patricia Highsmith, Galm stuns with this eerie, suspenseful ride of a novel. I loved this book.”
—Paula Bomer, author of Inside Madeleine