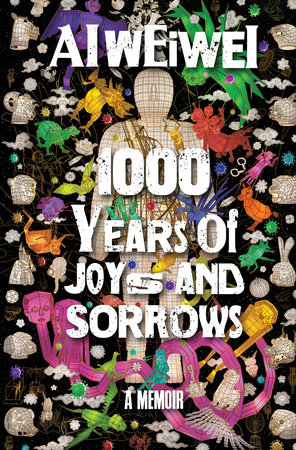 1. What brought you to this book? Are you a fan of Ai Weiwei, or were you interested in the history of China? If you know Weiwei’s art, do you have a favorite installation? Why?

2. In 1942, Mao held the Yan’an Forum on Literature and Art. Weiwei notes “The goal of this meeting was to make patently clear that literature and art had to serve the Party, just as soldiers had to obey the orders of their superiors.” (page 81) What are your thoughts on a government’s role in literature and the arts in a democracy? What are some examples of governmental impact on art—whether positive or negative—in recent history?

3. After several home invasions by the Red Guards, Weiwei writes that his “Father decided to burn all his books, and I was his helper. We stacked the books up next to a bonfire, and one by one I tore out the pages and tossed them into the fire. Like drowning ghosts, they writhed in the heat and were swallowed by flames.” (pages 132–133) Why is this scene particularly disturbing? This memoir is full of powerful passages. Are there other passages that have stayed with you?

4. The Cultural Revolution began in Beijing in 1966 and quickly spread across China during the mid-twentieth century, with the manufactured upheaval “everywhere stirring boorish, vengeful crowds. Like dry kindling, they were just waiting for a spark to light their fire.” (page 93) Do you see any parallels in American history involving mobs and instigation? Why do you think masses of people can be so easily manipulated by powerful men?

5. “Many of my earliest memories are fractured.” writes Weiwei, “After all the convulsions that China had experienced, genuine emotions and personal memory were reduced to tiny scraps and easily replaced by the discourse of struggle and continuous revolution.” (page 4) What is the importance of memory in our lives, both personally and collectively? How can the state manipulate or repress memory to its advantage and what role did that play in Weiwei’s desire to become an artist?

6. Weiwei’s creations, in particular Black Cover Book, provoked the Chinese authorities. What art or play or song has provoked outrage in America, and from what circles? What has been the impact of that provocation? Does it have the power to change the world, and if so, how?

7. The Chinese Communist Party uses terms like “thought reform” (page 102) and “stability maintenance,” (page 252) bringing to mind concepts like “memory hole” and “doublespeak” from George Orwell’s classic 1984. Do you see any signs of such coercive methods in the United States—or have you heard “Orwellian” phrases—today? What does contemporary American propaganda look like? How can we combat it?

8. In the United States, Weiwei begins his education in America at the Parsons School of Design in Manhattan and the Art Students League of New York. He also immerses himself in life outside formal education: finding odd jobs as a house cleaner and dish washer, visiting galleries, befriending artists, sketching portraits with charcoal and chalk on the street, and photographing protests. In what ways did Weiwei’s experiences in the U.S. help shape his future career and viewpoints?

9. Weiwei writes: “I am no admirer of order—whether order appears in Eastern or Western guise, it always triggers suspicion in me. I dislike the constraints on human nature and the restrictions on choice that order imposes.” (page 245) What do you think of Weiwei’s belief? Does it resonate with you? Why or why not? What is the difference between order and control and law and order?

10. Though Weiwei helped conceive Beijing’s famous Bird’s Nest stadium for the 2008 Summer Olympics, he stayed away from the opening ceremony in protest. “The Chinese regime sought to gloss over the ideological gap that separated it from the world’s democracies, and by openly criticizing this phenomenon I had become a maverick, a political opponent, and a potential threat.” (page 241) What do you think of this action? Who do you admire who has stood up to tyrannical forces?

11. Weiwei posits: “If art cannot engage with life, it has no future.” (page 256) What do you think of this statement? How have you engaged with the artistic world? Are there particular pieces of art that have affected you? Are there certain mediums— painting, sculpture, theatre—that you are especially drawn to, as an observer or a practitioner? Why?

12. In the Afterword, Weiwei discusses his time on the Greek island of Lesbos, where he witnessed families experiencing the refugee crisis firsthand. Some Syrians were so weak they had to be carried ashore, only to collapse on the sand. Weiwei responds: “I began to travel widely: to the refugee camps in eastern Turkey . . . to the Palestinian refugee settlements in Lebanon . . . to Jordan’s huge Syrian refugee camps and the no-man’s-land on its northern border.” (page 366) Political repression and violence, extreme drought and other climate changes, natural disasters—the reasons for mass population shifts and displacement continue around the world. What do you think of Weiwei’s efforts to shed light on the worldwide refugee crisis? How can we address it as a global community?
Learn More About 1000 Years of Joys and Sorrows
print

It’s What I Do

In Order to Live
Back to Top