Woman in the Shadows Reader’s Guide 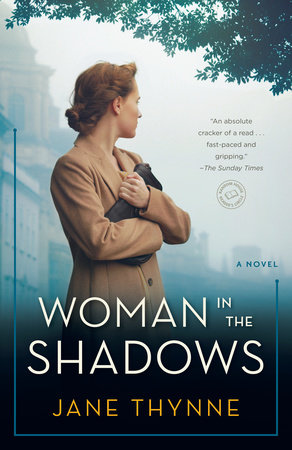 Woman in the Shadows Reader’s Guide

A Conversation Between Jane Thynne and Isabel Wolff

Isabel Wolff was born in Warwickshire and read English at Cambridge. She is a Sunday Times bestselling author of ten novels, published in twenty–nine languages. She lives in London with her family.

Isabel Wolff: In Woman in the Shadows a young woman is murdered at a Bride School. How did you even come across such a place?

Jane Thynne: Like all the best research it was pure serendipity. I was visiting Schwanenwerder, the picturesque island
in Berlin’s Havel River, beloved of many senior Nazis, because I wanted to take a look at the Goebbels family villa.
As I walked around the island I came across a handsome white mansion that I was sure I had glimpsed somewhere in a book. Looking it up I discovered it was the first Reich Bride School, established by Heinrich Himmler in 1935 to train wives for the SS. Just the idea provoked a giddy novelistic rush. I knew at once it would make a perfect setting for a crime!

IW: The Third Reich is often seen as a “male story.” We know about Hitler, Goering, Goebbels, and Hess, but we rarely hear about their wives and girlfriends. What made you want to write about them?

JT: Women are often the untold half of history, so if you want to get a different perspective on a historical period, the answer is to write the stories of the women. As we’ve seen in recent novels about the wives of Ernest Hemingway, F. Scott Fitzgerald, and Frank Lloyd Wright, not to mention in the works of Philippa Gregory, the details of marital relationships help history come alive. In the case of the Nazis, looking at the wives and girlfriends of historic monsters helps us see them as human beings, and that is what we need if we are to understand the effect they had on people and their ability to seduce large numbers of the population.

JT: Yes! When Clara first steps off the train in Friedrichstrasse station, she is only twenty–six, escaping a bad love affair in England and trying to get closer to her late mother’s homeland. In 1933, Hitler had only just come to power and the scale of his ambitions was unknown. I really wanted to see how Clara would change over time, as the backdrop in Nazi Germany darkens and the world moves towards war. Today we view the twelve–year–long Nazi period in retrospect, but those who endured it saw the full horror of the regime only gradually unfold. As Clara lives through it she has to deal with those events, yet those events also shape her.

IW: Do you plot your novels closely, or do you just go where the story takes you?

JT: Woman in the Shadows, like all the Clara Vine novels, is a thriller, and thrillers need to be meticulously plotted. You have to make the plot and the subplot interact and get the tension right at critical moments. Yet the great thing about writing is that it works organically, so the themes mesh in your mind and a storyline will often present itself when you’re not expecting it.

IW: Who is the Woman in the Shadows?

JT: Firstly, it’s Anna Hansen, the girl who is killed in the shadowy Bride School garden at the beginning of the novel. Her secret concerns the dramatic light and shade around an important individual. In another way it’s Clara Vine herself, who works in the shadows as a British spy. But further, it could apply to the whole female population of Germany, whose lives and rights were overshadowed by a cruel and misogynistic regime and whose stories I want to bring to light.

IW: Why did you choose to write about a female spy?

JT: I’m so over the idea of the spy as a solitary, embittered, alcoholic male! I wanted to explore the pressures on a young woman coping with all the ordinary things—-relationships, career, and the desire for children—-who finds herself in a quite extraordinary predicament. Clara’s like most of us, but her loyalty to her country and her ability to act have placed her in a situation where her qualities of character are tested to the limit.

1. The book opens with the murder of Anna Hansen. How does this foreshadow the events that are to come? Analyze her death in the context of the larger war narrative.

2. What do you think of the lessons taught to the prospective SS wives at the Bride School? Does their training really prepare them for their political, social, and personal lives under the Nazi regime?

3. What do you think the title of the novel refers to?

4. Compare and contrast the roles of men and women in Nazi society. How do the women’s experiences in the war differ from those of the men?

5. Clara uses her power of celebrity to infiltrate Nazi society and act as a spy. Are there any contemporary celebrities you might compare her to who similarly use their influence to exert political power?

6. Is there a conflict between how women behave—-or are meant to behave—-in the shadows as opposed to in the spotlight? How does Clara’s behavior change when she’s on the stage or on screen compared to when she’s alone or with trusted friends?

7. Which character do you connect with the most, and why?

8. Discuss the ways in which politics and warfare have changed since 1937. What, if anything, is still the same? Do you see any parallels between the international political culture of the time and our current global environment?

9. What surprised you the most in the novel?

11. Photography and film were not exactly novelties in the 1930s, but the many varied uses were still relatively new and unexplored. Cameras are used by the Germans to great effect in spying on the British and in spreading propaganda within Germany. Cameras are also an important aspect of Clara’s professional life. How did the widespread use of film and photography change and shape the everyday experiences of common citizens? Does it continue to do so today? In what ways?

12. Discuss the power of the media in Nazi Germany and today.

13. What do you think of the role of the British aristocracy in supporting the Nazi leadership? Were you surprised by what you read of the Mitford sisters and the Duke and Duchess of Windsor?

15. Discuss the bear pit. What do you think the bear represents (if anything)? In the final scene of the novel, Clara wishes that the bear could escape and wreak havoc on the city. Why does she wish that? What do you wish for the bear?

16. In the last line of the novel, Erich tells Clara not to worry, that they’re safe; “anyone watching would swear that she believed it.” Clara is a talented actress. How does the Clara that we see presented to the world differ from the true Clara? Discuss her motives for concealing her true fears.

Learn More About Woman in the Shadows
print

The Naïve and Sentimental Lover

Murder on the Leviathan

Flight of Dreams
Back to Top