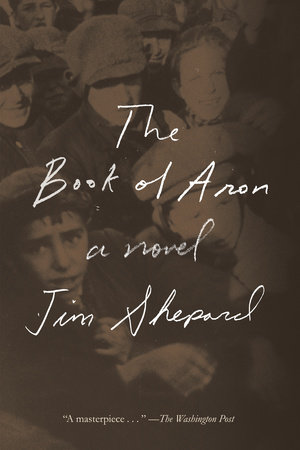 The questions, discussion topics, and reading list that follow are intended to enhance your reading group’s discussion of The Book of Aron, the haunting new novel by acclaimed author Jim Shepard.

From the hugely acclaimed National Book Award finalist, a novel that will join the short list of classics about the Holocaust and the children caught up in it.

Aron, the narrator, is an engaging if peculiar young boy whose family is driven from the Polish countryside into the Warsaw Ghetto. As his family is slowly stripped away from him, Aron and a handful of boys and girls risk their lives, smuggling and trading things through the “quarantine walls” to keep their people alive, hunted all the while by blackmailers and by Jewish, Polish, and German police (not to mention the Gestapo).

Eventually Aron is “rescued” by Janusz Korczak, a Jewish-Polish doctor and advocate of children’s rights famous throughout prewar Europe who, once the Nazis swept in, was put in charge of the ghetto orphanage. In the end, of course, he and his staff and all the children are put on a train to Treblinka, but has Aron managed to escape, to spread word about the atrocities, as Korczak hoped he would?


Jim Shepard has masterfully made this child’s-eye view of the Warsaw Ghetto mesmerizing, sometimes comic despite all odds, and truly heartbreaking. It is nothing less than a masterpiece.

1. The novel opens with Aron discussing his name, and how he became known as “Sh’maya,” which means “God has heard.” Why is this important?

2. Shepard uses a child for his narrator. How does this affect the way the story unfolds?

3. Throughout the novel, other characters say things like, “Sh’maya only looks out for himself.” Does this ring true to you? Why do the others believe this?

4. On page 5 Aron says, “[My father] said a person with strong character could correct his path and start again but a coward or weakling could not…. It was terrible to have to be the person I was.” Does this prove true by the end of the novel?

5. What are the consequences of the death of Aron’s younger brother? How does it foreshadow what’s to come? Why doesn’t the author tell us his name?

6. Aron’s mother says, “One believed this and the other believed that but what was fated to happen always will” (page 41). Does Aron share this worldview? In what ways?

7. Discuss Aron’s relationships with the other children in the gang—Lutek, Boris, Zofia, Adina. Which does he care about the most? Who is his truest friend?

8. Bit by bit, the situation in Warsaw worsens. Which of the characters seem to understand what’s going on? How do their actions reflect that understanding?

9. With his child’s-eye view Aron doesn’t spend much time on introspection, which forces us to read between the lines. How does this increase the impact of what’s happening?

10. Aron describes the food—and what his gang goes through to procure it—in matter-of-fact terms. Why is he so casual about what they’re reduced to eating?

11. Boris’s father thinks Janusz Korczak is “probably the safest Jew in the ghetto” (page 84). Why does he think so? Is he right?

12. Why does Korczak insist on producing performances by the children? What does his choice of subject matter tell the reader?

13. How does the experience of seeing adults—including their own parents—abused by the Nazis change the children of Warsaw?

14. Discuss Aron’s relationship with Lejkin. Why does Aron keep insisting, “He’s not my friend”? Does having an in with Lejkin prove to be a good thing for Aron?

15. When Aron tells Lejkin where he and Lutek will be, do you think he understood the ramifications? Does it prove that “Sh’maya only looks out for himself”?

16. When Aron’s mother gets ill, she tells him she wanted to benusik, “something good. Someone useful and smart. She said that if she’d been nusik, then people who couldn’t get along, people with problems, would have come to her. She would have listened. She would have contributed more than she had” (pages 148–9). Who in the ghetto is nusik?

17. Compare Lejkin and Korczak. Both men chose Aron for special treatment—why him? What do the adults hope to get out of the relationship?

18. Why doesn’t Korczak leave when he has the opportunity? Aron spies on him during his refusal—why does he then negotiate with Boris to help Korczak escape?

What is going on in this passage?

20. Why does Aron refuse to help Boris and the boy?

21. After the orphanage is emptied, Witossek apologizes to Korczak. “He said he wanted the good doctor to know that what was going to happen was going to happen and that how everyone chose to face it would be the point” (page 248). Korczak agrees. Do you agree? Why?

22. Why do you think Shepard chose to end the novel with Korczak’s Declaration of Children’s Rights?

23. What is the overall theme of the novel? If there is one thing the author wants us to consider after reading it, what would that be?

The author of seven novels and four collections of stories, Jim Shepard was born in Bridgeport, Connecticut, and now lives in Williamstown, Massachusetts, with his wife and three children, and teaches at Williams College. His work has been published in The New Yorker, The Atlantic, McSweeney’s, Tin House, Zoetrope, Playboy, and Vice, among other periodicals.
Learn More About The Book of Aron
print

The Fifth Son
Elie Wiesel
Back to Top