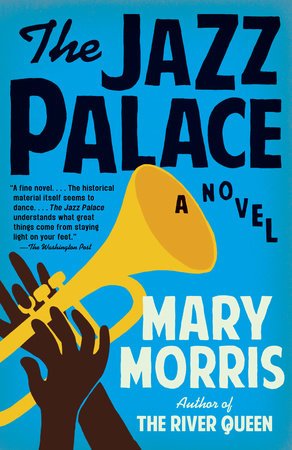 The introduction, discussion questions, and suggested reading that follow are designed to enhance your group’s discussion of The Jazz Palace, a novel gangsters, musicians, and intrigue by Mary Morris, set in 1920s Chicago.

Boomtown Chicago, 1920s—a world of gangsters, musicians, and clubs. Young Benny Lehrman, born into a Jewish hat-making family, is expected to take over his father’s business, but his true passion is piano—especially jazz. After dark, he sneaks down to the South Side to hear the bands play.

One night he is asked to sit in with a group. His playing is first-rate. The trumpeter, a black man named Napoleon, becomes Benny’s friend and musical collaborator. They are asked to play at a saloon Napoleon has christened The Jazz Palace. But Napoleon’s main gig is at a mob establishment, which doesn’t take kindly to their musicians freelancing . As Benny and Napoleon navigate the highs and the lows of the Jazz Age, a bond is forged between them that is as memorable as it is lasting. Morris brilliantly captures the dynamic atmosphere and dazzling music of an exceptional era.

1. When the SS Eastland capsized in 1915, 844 passengers and 4 crew members lost their lives. What did you think about the author’s decision to begin the novel with this event?

2. Did you find Benny’s attempts to save passengers admirable or foolish?

3. Why doesn’t Benny tell his father about the Eastland when he returns to the factory? What does it say about their relationship?

4. Hannah and Leo Lehrman have lofty ambitions for their son, Benny, and they are unable to accept his passion for jazz. Do you think they would have been more open to Benny’s love of jazz had they not already lost one son?

5. Is Benny rejecting his family and his faith with is music? Or is he “coming closer to God” as his music teacher Mr. Marcopolis tells him?

6. Chicago is the author’s hometown. The sights, smells, and sounds of the city are beautifully described in detail. Did reading the novel inspire you to visit? If you live there or if you’ve already visited, does the novel enable to see the city with fresh eyes?

7. The author breathes new life into historical figures such as Al Capone, Louis Armstrong and Rudolph Valentino. How do these celebrities contribute to narrative of the novel?

8. Napoleon’s grandmother tells him “Everyone needs a trickster in this world.” Do you agree?

9. Discuss the significance of Pearl’s discovery of the “absence of sound” beneath the waters of Lake Michigan.

10. Do you think that Pearl is the wise, quiet strength of the novel?

11. Benny and Napoleon experience anti-Semitism and racism at different points in the novel. Do these injustices provide a bond between them that is even stronger than their love of music?

12. Did the scene in which Benny rushes Napoleon to Marta’s surprise you? Discuss the author’s skill in setting up this fictive moment, and how that scene made you feel.

13. Discuss Opal and how she embodies the novel’s central them of the freedom to pursue one’s passion in a very powerful and poignant way.

14. Does Benny’s return to a more traditional way of life—work, family, and marriage—seem like a failure or a new beginning?

15. What do you think the future holds for Benny and Pearl as we leave them bathed in the glow of “The Century of Progress”?

Mary Morris is the author of numerous works of fiction and nonfiction, including the novels A Mother’s Love and House Arrest, as well as the travel memoir classic Nothing to Declare: Memoirs of a Woman Traveling Alone. The recipient of the Rome Prize in literature and a grant from the John Simon Guggenheim Memorial Foundation, she was raised in Chicago and now lives with her family in Brooklyn, New York.

The Adventures of Augie March by Saul Bellow
Dandelion Wine by Ray Bradbury
Ragtime by E.L. Doctorow
Sanctuary by William Faulkner
The Great Gatsby by F. Scott Fitzgerald
The Jazz Age by F. Scott Fitzgerald (essays)
Six Tales of the Jazz Age by F. Scott Fitzgerald (This volume includes “The Curious Case of Benjamin Button” that was made into a film with Brad Pitt)
The Sun Also Rises by Ernest Hemingway
A Moveable Feast by Ernest Hemingway
Child of the Century by Ben Hecht
Their Eyes Were Watching God by Zora Neale Hurston
Babbitt by Sinclair Lewis
Really The Blues by Mezz Mezzrow
Coming through Slaughter by Michael Ondaatje
The Color Purple by Alice Walker
Native Son by Richard Wright
Learn More About The Jazz Palace
print

The Gallery of Vanished Husbands

Necessary Errors
Back to Top