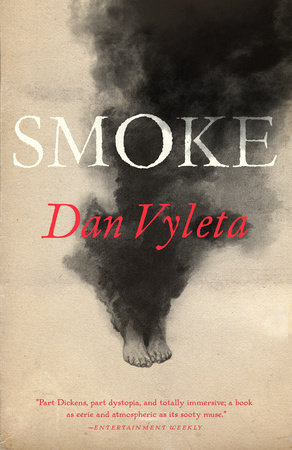 1. Smoke is a physical marker of sin. And yet Thomas, Charlie,and Livia are increasingly willing to embrace their smoking. As you read the novel, did your attitude towards Smoke change? If so, at what point?

2. If a physical manifestation of sin really existed, so that we could see who is evil and who is not, would the world be a better place?

3. Renfrew tells us that Smoke infects. What are the implications of this? Does the book imply we would be better people if we lived in relative isolation from one another?

4. Social class plays an important role in Smoke. Discuss the complicated relationship between social status and morality, real and perceived.

5. “The most difficult thing,” Charlie tells Lady Naylor, “is to compromise.” What does he mean by that assertion? Do you agree with him?

6. There are a range of characters that might qualify for “villains”. Who best deserves the title?

7. The corruption of innocence permeates the novel (the Beasley & Sons candy and the infection of Mowgli are two examples). Did it inspire you to think in new ways about our responsibilities as adults to our children and their environment? Are children born in innocence, as we like to insist, or in Smoke, as the book maintains?

8. “We made a choice. Pandora’s box. We opened it. Now we have to brave it out,” says Thomas at the close of the novel. Did Thomas, Livia, and Charlie make the right choice? Or was it simply the only choice?

9. What do you think the future holds for the three friends?

Dictionary of the Khazars (M)

The Gate to Women’s Country

Heaven’s Net is Wide
Back to Top