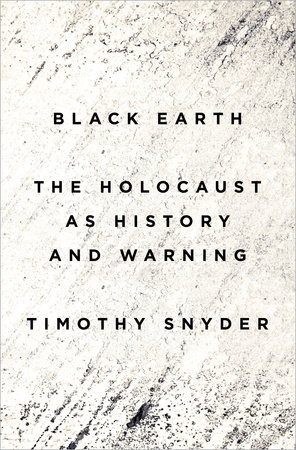 1. Before reading Black Earth, were you aware that Jews in Germany during World War II may have been safer than Jews in Poland, the Ukraine, and other neighboring eastern European countries? What was Snyder’s most startling revelation?
2. What is your take on Snyder’s assertion that Hitler was attempting to “colonize” eastern Europe just as England, France, and Belgium had earlier colonized the African continent?
3. Discuss Snyder’s idea of “statelessness.” Is there anything the citizens of these “colonized” nations could have done to stop Hitler from dismantling their political states?
4. How old were you when you first learned about the Holocaust? At what age should our children be taught about the atrocities that happened? Before reading Black Earth, did you consider the possibility that something similar might happen again?
5.  “Every Jew who survived the Holocaust had to fight collective inertia, abandon the familiar and the beloved, and confront the unfathomable” (p. 250). If you were part of a persecuted minority—even with the lessons of history—how prepared would you be to leave behind everything you have and know in order to save yourself and your family?
6. Snyder writes, [PE21] “Just as people who resist one form of tyranny will tend to resist another, people who have collaborated with one form of tyranny will tend to come to terms with the next” (p. 285). Do you agree with Snyder’s assessment, or do you feel that most individuals judge each regime on its own flaws and merits?
7. “Hundreds of Jewish children, perhaps a few thousand, survived because peasant families needed labor” (p. 306). After the end of the war, did these children owe a debt to the families who saved them? Or did the circumstances absolve them of any obligation?
8. “Hitler was right to believe that, in an age of global communication, notions of prosperity had become relative and fluid” (p. 324). Is it fair for citizens of first-world countries to expect citizens of developing countries to content themselves with a lower standard of living?
9. Recently, Oskar Gröning, a ninety-three-year-old former SS soldier, made headlines when he was put on trial for the crimes he committed while working at Auschwitz. He has pled guilty to “moral complicity,” but claims he is free from “criminal responsibility” for his acts. After reading Black Earth, how do you view his plea for lenience?
10. Despite the results of sociological studies such as the Stanford prison experiment and the Milgram electric-shock experiment, most of us believe that we wouldn’t harm an innocent human being. Reflecting upon the Holocaust, Snyder writes: “the notion that local east European antisemitism killed the Jews of eastern Europe confers upon others the same sense of superiority akin to that the Nazis once felt. These people are quite primitive, we can allow ourselves to think” (p. 150). Do you believe that you and the people you know are incapable of committing the same kind of atrocities? Can you imagine circumstances in which you might change your mind?
11. Religious and/or ethnic minorities often take to the sea to escape persecution in their homelands. Recently, groups fleeing Libya, Syria, Myanmar, and Bangladesh by boat have been refused amnesty, sent back to their homelands, and sometimes simply denied entry to their destination country and forced back out to sea. How is their plight different from that of the Jews who attempted to flee Nazi rule?
12.  “The history of the Holocaust is not over. Its precedent is eternal, and its lessons have not yet been learned” (Black Earth, p. xii). Do you agree with Snyder’s assertion that we are again approaching an era with economic and climatic conditions similar to those that spurred Hitler to launch his campaign against the Jews?
13. In your opinion, what is Snyder’s most urgent message, and what can we—as ordinary citizens—do to prevent a future Holocaust?
Learn More About Black Earth
print

Death in the City of Light
David King

A Castle in Wartime
Catherine Bailey

The Bridge at Andau
James A. Michener

The Man Without a Face
Masha Gessen

Appeasement
Tim Bouverie
Back to Top