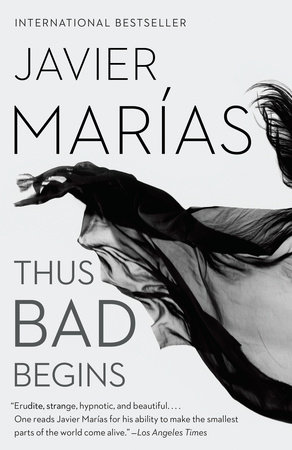 The questions, discussion topics, and reading list that follow are intended to enhance your reading group’s conversation about Thus Bad Begins, celebrated novelist Javier Marías’s masterful story about a famed filmmaker’s deeply troubled marriage, and the lies we sometimes construct around ourselves in order to survive.

1. When Juan De Vere begins his tenure as Eduardo Muriel’s assistant, he is twenty-three years old, living the life of “a true beginner.” In working with Muriel, how does he learn to assert himself in the world? How does De Vere’s youthfulness and naiveté become fodder for Muriel and his social circle? When does De Vere seem most impulsive or immature in his decision-making?

2. On page 384 of Thus Bad Begins, Muriel declares “This is a grubby country.” How does the social landscape of post-Franco Spain affect the tone of the novel? How are personal secrets and political treachery interwoven throughout the narrative?

3. How would you describe the working relationship between Muriel and De Vere? How does their relationship evolve over the course of the novel? When does De Vere feel most comfortable around his employer? When does he challenge him?

4. Discuss the narrative structure of Thus Bad Begins. How does Marías employ a gradual layering of detail to create narrative tension? How does the use of an elder De Vere as narrator help to contextualize his actions as a young man?

5. The tension between private and public selves is explored throughout Thus Bad Begins. How does the political climate of Spain force its citizens to obscure parts of their lives? How does Eduardo and Beatriz’s public presentation of their marriage differ from their behavior behind closed doors? Which characters grate most prominently against the idea of suppressing their true identity?

6. On page 127, Beatriz admits, “I could never get divorced or even separated, not on my initiative.” Explore this attitude. Is this unwillingness to separate a result of the social conservatism left over from Franco’s reign, or of a personal commitment to her husband? Once the roots of Eduardo’s anger toward Beatriz are revealed, how do you interpret her choice to stay?

7. When Juan first encounters Beatriz, he views her merely as an older woman, albeit an attractive one. How do his feelings toward her evolve over the course of the novel? What spurs him to sleep with her? How does his behavior change after their encounter?

8. The movida is described as a wild era of excess after years of bloodshed, political treachery, and social conservatism. How does the ubiquitous party scene factor into social relationships in Thus Bad Begins? How do generational attitudes toward sex and gender roles differ between Muriel’s social set and De Vere’s peers?

9. One of the main conditions of De Vere’s employment is that he must find out the truth about Dr. Van Vechten. Given Muriel’s grave insistence about the importance of this mission, why do you think he refuses to listen to De Vere’s discovery about the doctor? How do you interpret his hostile reaction?

10. Discuss the atmosphere surrounding Beatriz’s death. Given Eduardo’s cruel behavior toward his wife, are you surprised by his outpouring of emotion after the accident? How does Beatriz’s death affect Juan?

11. On page 385, Muriel remarks that “justice doesn’t exist.” How does this attitude permeate the social landscape of Spain in the post-Franco era? Describe the atmosphere of “general amnesty” as mentioned on page 33. How does this carte blanche approach to forgiveness relate to survival?

12. Do you think De Vere views Muriel as a role model? Does his respect for Muriel evolve or waver over the course of the novel? What would you say is the most important lesson he learns from his employer?

13. Discuss the significance of the title and its refrain throughout the novel. How does it act as an indicator of mood and tone during the novel’s darkest moments?

14. Throughout Thus Bad Begins, a mood of anticipation is built as secrets and layers of deceit are revealed to the reader. What is the most surprising aspect of this novel for you? Were you shocked by its ending?

Walking on the Ceiling
Back to Top