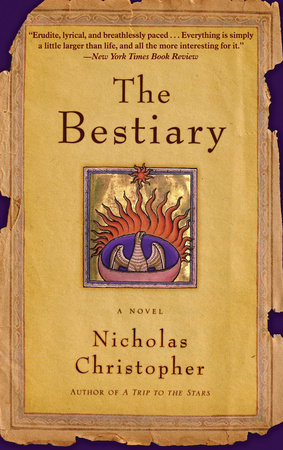 His mother dead and his stern seaman father largely absent, Xeno Atlas lives a quiet life in a Bronx apartment with his maternal grandmother, who captivates Xeno with tales of the abundant animal spirits she sees around her. Nurtured on these fantastical stories, Xeno’s fascination with animals grows, and later develops into an obsessive quest for a lost medieval manuscript entitled the Caravan Bestiary. In its pages, a vanished world is rumored to be described–that of mythical creatures denied entrance onto Noah’s Ark before the Great Flood. Xeno travels the earth in search of the Caravan Bestiary and the mysteries it holds, but realizes that only by unlocking his family’s many secrets he will discover what he is truly seeking.

In The Bestiary, acclaimed novelist Nicholas Christopher (“A superbly lyrical and descriptive writer.”–New York Times Book Review) creates a vivid tale of ethereal intrigue and intellectual mystery, entwined with a nuanced love story. The questions below are intended to assist your reading group’s discussion of this unforgettable novel.

1. Before you started reading The Bestiary, what did you know about the fable of Noah and the Ark? Did The Bestiary change your perception of this legend? What are some parallels between The Bestiary and the Noah’s Ark parable?

2. Xeno tells us that his name, derived from Latin, means “gift.” His father claims that in Greek, “xenos” means “stranger.” Are either of these meanings an accurate description of Xeno?

3. The book opens with this line from Xeno: “The first beast I laid eyes on was my father.” Discuss Xeno’s father. What was behind his remoteness?

4. What did you think of Xeno’s grandmother? Why did she have such a profound influence on him, even years after her death?

5. In Chapter One, Xeno believes he witnesses his grandmother become a fox. In Chapter Two, he encounters an actual fox in the woods, and recalls a monks’ proverb: “The fox can leave tracks in one direction while traveling in another,” (page 83). Are these two events connected? What does the monks’ saying mean? On what other occasions does Xeno see (or think he sees) a fox?

6. Water is a recurrent symbol in The Bestiary. Discuss some instances where water is prominent, and their significance. What are other symbols employed in the novel?

7. Xeno’s grandmother “talked about the animals she saw embodied in other people,” (page 14). What kinds of animals would you associate with the main characters?

8. Did it surprise you that Lena became a radical animal-rights activist? And Bruno, a celebrated academic? Is animal cruelty a metaphor for another theme in the book?

9. One might consider Xeno an orphan, as his mother was dead and his father was detached, both physically and emotionally. Who are the surrogate parents that Xeno adopts? How do these people help him?

10. Bears and panthers make multiple appearances throughout the novel, in both physical and figurative forms. What is the relevance of each? Why do you think the author chose these particular animals?

11. Why do you think Xeno longed for Lena throughout his life? Did you expect that he would be reunited with her?

12. What explains Xeno’s obsession with finding The Caravan Bestiary?

13. “Listening to Bruno, I was reminded of my grandmother’s most important gift to me: her belief that we must pursue the beasts of this life, rather than allowing them to pursue us,” (page 229). What are the “beasts” in this statement? How does Xeno confront them?

14. What did you think of the book’s ending?

Learn More About The Bestiary
print
Back to Top