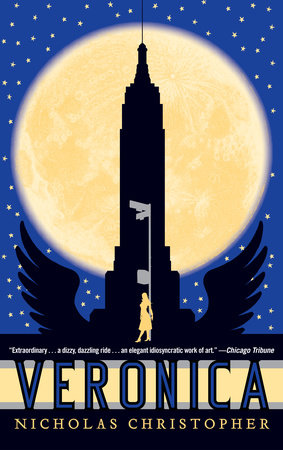 On a snowy night in February–at the improbable corner in lower Manhattan where Waverly Place intersects itself–a photographer named Leo meets Veronica, the beautiful, enigmatic daughter of an illusionist who has been swallowed up in time. Veronica is looking for an appetite, a savior. And she is soon leading Leo into a dangerous labyrinth of delights that winds beneath and beyond a luminously transformed city of underground streams, dragonpoints, and mystically altered time. At the frozen apex of an extraordinary winter, Veronica has enticed Leo into a wonderful, terrible world…and away from his ordinary life forever.

1. Veronica is full of supernatural events, but in your opinion, are the characters themselves supernatural beings? Or are some human and some supernatural?

2. What kind of person is Veronica, the title character? She is clearly romantic and compelling, but is she a sympathetic, or even a "good," character? Her original intention was to send the innocent Leo into the same eternal purgatory in which her father was living. Was this a ruthless intention, or was it forgivable, since her goal was to save her father?

3. Do you find it surprising that Leo goes along so readily with Veronica and Clement’s plans for him? What does this acquiescence say about his character?

4. Nicholas Christopher has chosen the names of his characters carefully; most of them signify something appropriate to the characters. What do the names Albin White, Wolfgang Tod, Otto, Starwood, Felicity, Alta and Leo suggest? What about Veronica and Viola?

5. Leo and Veronica are linked by a yearning for their lost parents. How do Leo’s feelings for his mother manifest themselves in the narrative? In what way does Veronica resemble, and even come to represent, Leo’s mother? How do Veronica’s feelings for her own mother enter into the story?

6. What is the Fourth Dimension, as described by Veronica and experienced by Leo? Have you read any other books in which time travel is described? How do Christopher’s descriptions compare with them?

7. If you have read the Tibetan Book of the Dead, consider the ways in which it has influenced Veronica. What elements of the novel refer to that book? Who is the Tibetan character who appears throughout Leo’s time travels? What is the significance of the snowy Tibetan scenes Leo observes through mirrors?

8. Whom do you think the old woman and the two children that Leo sees occasionally are? What is their relationship to the action and to the other characters?

9. Several characters in the novel, including Sir Walter Ralegh, have white eyes "like marble statues." What do these characters have in common? Can you think of a reason why Ralegh’s eyes change color as he is dying? What is the significance of the fact that Veronica (like all her family members) has one blue and one green eye?

10. There are many images of snow, ice and icebergs in the novel. Remi Sing’s painting show is called "Ice Floes;" Leo once worked as an icebreaker on the North Sea; Wolfgang Tod’s hand is as cold as ice. What does the author mean to convey with these images? Which characters are associated with snow and ice?

11. What does the emblem of intersecting triangles signify, and in what places does Leo observe it? What other emblems are repeated in the novel?

12. Some of the novel’s characters have wings; for example, the mysterious children Leo sees in the park, Walter Ralegh and Albin White. Why do you think these wings are artificially attached and do not grow directly out of the back? Does the author imply that these characters are actually angels? What significance does Angel’s Cafe have?

13. Who is Dr. Xenon? Is he a real doctor, or is he part of the supernatural structure that Veronica gives Leo’s life? Why does he vanish without a trace?

15. Christopher often uses the color green. What atmosphere does he intend to convey by the use of this color? How does it contrast with the snowy and icy white often depicted in the novel?

16. Which religious and mystical traditions have influenced Veronica? Can you find elements of Christian theology and imagery along with others? Do you find this combination of different traditions an effective one?

The Council of Shadows

The Secrets of Life and Death

Fire Kin
Back to Top