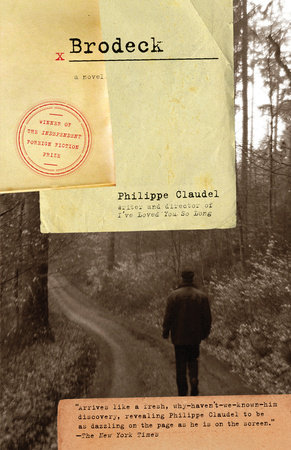 The introduction, discussion questions, and suggested further reading that follow are designed to enhance your group’s discussion of Brodeck, Philippe Claudel’s powerful and moving new novel.

Forced into a brutal death camp, Brodeck returns to his village at the end of a great war and takes up his old job of writing reports for a governmental bureau. One day a stranger comes to live in the village. His odd manner and habits arouse suspicions: His speech is formal, he takes long, solitary walks, and although he is unfailingly friendly and polite, he reveals nothing about himself. When the stranger produces drawings of the village and its inhabitants that are both unflattering and insightful, the villagers murder him. The authorities who witnessed the killing tell Brodeck to write a report that is essentially a whitewash of the incident.

As Brodeck writes the official account, he sets down his version of the truth in a separate, parallel narrative. In measured, evocative prose, he weaves into the story of the stranger his own painful history and the dark secrets the villagers have kept hidden.

1. The novel is set in an unidentified place and time. Why do you think the author chose to make the setting anonymous? Do you think he had a specific historical event in mind? Was this device effective or not? Can you think of another novel in which this is done?

2. The first lines of the novel are, “I’m Brodeck and I had nothing to do with it. I insist on that. I want everyone to know.” How do you interpret Brodeck’s tone? Why is he so adamant about this point? Is it true that he’s innocent?

3. Brodeck takes it upon himself to assign names to the significant events in his life. Kazerskwir, or “the crater,” refers to his two years in the death camp and the Ereigniës, or “the thing that happened,” refers to the murder at Schloss’s Inn. In your opinion, why does Brodeck name these events? Are these names fitting?

4. Brodeck’s experience in the prison camp is revealed at intervals throughout the novel, rather than all at once. Why do you think the author chose to develop the story this way?

5. Father Peiper tells Brodeck, “Fear is what governs the world.” How is this evidenced in the novel? Do you think this is true?

6. The novel frequently touches on the contrast between remembering vs. burying the past. Which characters or scenes exemplify this theme? Do you believe that a society can learn from past mistakes? What does the novel seem to say about the merit of a historical record?

7. Were you surprised by Diodemus’s letter? How did you feel about Brodeck’s admission that he doesn’t feel hatred toward him? Do you think Diodemus’ action is forgivable? Why do you think Brodeck doesn’t turn over the letter to see the names of the other villagers who sent him away?

8. Do you agree with the Anderer when he tells Brodeck, “talking is the best medicine”? Does talking about one’s problems have any negative effects?

10. In Brodeck’s last flashback he tells what happened on the train ride to the prison camp. Why does he save this scene for the end of the story? Did this event change the way you felt about him? Can you think of another time in the book when Brodeck acted cruelly?

11. Why does Brodeck decide to leave the village? Is his departure cowardly, brave, or neither?

Philippe Claudel is the author of many novels, among them By a Slow River, which has been translated into thirty languages and was awarded the Prix Renaudot in 2003 and the Elle Readers’ Literary prize in 2004. His novel La petite Fille de Monsieur Linh was published in 2005. Brodeck won the Prix Goncourt des Lycéens in 2007 and the English translation won the Independent Foreign Fiction Prize in 2010. Claudel also wrote and directed the film I’ve Loved You So Long starring Kristin Scott Thomas and Elsa Zylberstein, which opened in movie theaters in the United States in the fall of 2008 and in thirty other countries around the world.
Learn More About Brodeck
print
Back to Top