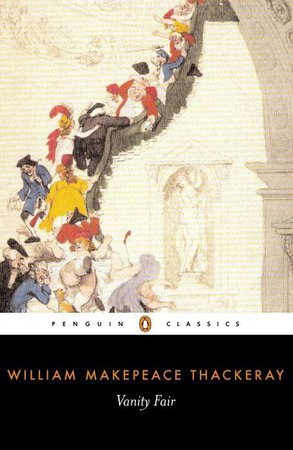 “Ah! Vanitas Vanitatum! Which of us is happy in this world? Which of us has his desire? or, having it, is satisfied?” —Vanity Fair

A bewitching beauty who bends men to her will using charm, sex, and guile. An awkward man who remains loyal to his friends, even when those friends don’t deserve his affection. A mother who cannot get over the loss of her husband and devotes her life to her child. Though written in 1847-48, William Makepeace Thackeray’s Vanity Fair is peopled by types who remain familiar today. The novel’s early nineteenth-century setting immerses us in a strange world of social stratification, moral strictures, and self-conscious sentiment. Yet its characters—from dissolute playboys and self-important heirs to judgmental aunts and finicky gourmands—are instantly recognizable.

None of the novel’s characters is more memorable than Becky Sharp, one of Victorian literature’s most remarkable creations. While Thackeray’s narrator takes pains to expose Becky’s subterfuges and to insinuate sexual immorality and even murder, we cannot help but admire her intelligence and élan. Alone among the novel’s major characters, she is not content to live out the life she was born into—that of a governess. Lacking money and family, she uses the only tools at her disposal, sex and cunning, to seek advancement in the world. Her success in gaining entrée to society’s most exclusive circles, despite the hostility of her husband’s family and a chronic lack of cash, is a testament to Becky’s audacity and brilliance, her ultimate downfall notwithstanding.

Thackeray juxtaposes Becky’s story with that of Amelia Osborne, the naïve, sentimental daughter of a wealthy merchant who goes bankrupt partway through the book. Her artless modesty and devotion to her first love, the good-for-nothing George Osborne, contrast sharply with Becky’s amoral machinations and social climbing. Yet as a paragon of womanhood, Amelia also falls short. Her passivity, her maudlin illusions, and her selfish exploitation of William Dobbin, a man who devotes his life to her, make her less than completely sympathetic; near the end of the book, Dobbin himself declares that he has wasted his life in pursuit of someone who is not worthy.

Dobbin alone comes through the book with dignity. He is, as Thackeray declares, a true gentleman. But in the end, having achieved what he long sought—marriage to Amelia—Dobbin too is disillusioned, fonder of his daughter and his History of the Punjab than he is of his wife, though he would never admit as much.

Thackeray interweaves the stories of these three main characters into an exuberant narrative that’s chockablock with indelible secondary characters and cynical aperçus that illuminate all manner of human folly. His withering gaze lands on both lords and ladies, exposing the mean-spirited pretensions and craving for distinction that permeate the whole social world. By placing the social skirmishes and family clashes of his characters against the backdrop of the Napoleonic Wars,Vanity Fair invites us to contemplate the pervasiveness of human strife—and the damage that our egotism and self-delusion do every day.

William Makepeace Thackeray was born in Calcutta in 1811, but sent to England at the age of six. He was educated at Charterhouse and at Trinity College, Cambridge. In 1833 he settled in Paris, after a major financial loss, and tried his career as a painter. It was here that he met nineteen-year-old Isabella Shaw, upon whom he based many of his virtuous but weak heroines, and whom he married in 1836. A year later they settled in London, where Thackeray turned seriously to journalism. His writing for periodicals includedYellowplush Correspondenceich appeared inFraser’s Magazine and then in 1841 in book form. Around this time personal and domestic pressures caused the already helpless Isabella to subside into a state of complete and permanent mental collapse, and the subsequent breakdown of the marriage formed a central part of Thackeray’s consciousness. His early work centered around rogues and villains, most famously in The Luck of Barry Lyndon (1844; revised as The Memoirs of Barry Lyndon, Esq. in 1856), and in his masterpiece, Vanity Fair, which appeared in monthly parts in 1847-48 and which most clearly reveals his socially satirical edge. The Book of Snobs, which originally appeared as a series in Punch, also attacks Victorian society with vicious wit. Thackeray’s later novels include The History of Pendennis (1848-50), The History of Henry Esmond, Esq. (1852), The Newcomes (1852-53), The Virginians (1857-59), which is the sequel to Henry Esmond, and The Adventures of Philip (1861-62). He also wrote a series of lectures, The English Humorists of the Eighteenth Century (1852-53), and numerous reviews, articles, and sketches, usually in the comic vein. From 1860 to 1862, he also edited Cornhill Magazine. Thackeray died suddenly on Christmas Eve, 1863.

A CONVERSATION WITH MIRA NAIR, DIRECTOR OF THE 2004 MOTION PICTURE OF VANITY FAIR

What challenges did you and the screenwriter, Julian Fellowes, face in adapting this novel?

Vanity Fair has been one of my favorite novels since I was sixteen years old. I know it very well, as does Julian Fellowes, who adapted the screenplay. Besides maintaining Becky Sharp as the narrative spine of the film, I was keen to preserve the democratic swirl of the book and to that effect wanted to keep all the important subplots alive. I wanted to preserve Dobbin as the moral center of the story, give Rawdon weight so that his love story with Becky could become credible and affecting, show Amelia’s mettle so she doesn’t sink into becoming the whimpering companion to Becky’s fire. Sometimes we amalgamated a few characters into one person (Lady Southdown, for instance) to preserve the hypocrisy, ambition, and greed that is of course the foundation of what Thackeray referred to as Vanity Fair.

In depicting England, I followed Thackeray completely. In writing Vanity Fair, he essentially wrote the cinema verité of his day, peppering his novel with enormous amounts of authentic detail, creating life in all directions. That is my joy as a director as well: to amplify the frame with a heightened reality that crackles with life. I didn’t forcibly infuse “my culture” into the movie—Thackeray has laced the entire novel with India, the dream of India, the luster of the colonies, making clear that at this time the middle classes in England were, for the first time, enjoying the wealth that came from the colonies. Oriental details pepper his book: he wrote in detail of how pashmina shawls were coveted, chinoiserie furniture, Indian embroideries, inlaid marble—you name it. I simply took these details and ran with them.

What are your thoughts on Becky Sharp? How would a woman like her fare in today’s world?

Becky is a complicated character. I wanted to preserve her complexity, her ambition, her folly, yet work with an actor like Reese who is just plain irresistible to watch. Reese was my first and only choice for playing Becky Sharp; she has wit, guile, and that enticing quality called Appeal that makes an actor a movie star. It was delicious working with her—she is an old pro in her young tiny bones: always impeccably prepared, a great listener, and calm and generous with her fellow actors. She never tires.

Aside from Becky, who are your favorite characters in the novel?

Dobbin was one of my favorites. His character was familiar to me from scores of Hindi movies I watched growing up: the hero’s best friend afflicted by unrequited love—usually played by the “silent-yet-deadly” actors like Raaj Kumar. Dobbin was the moral center of the story and needed to be played by an actor who was not afraid to be transparent about his emotion, yet not be boring in suffering. Rhys Ifans, thank you, thank you!

What do you think Vanity Fair has to offer to readers and viewers of the twenty-first century?

The philosophy inherent in the novel and what I call the yogic question Thackeray posed—”Which of us is happy in this world? Which of us has his desire? or, having it, is satisfied?”—is a timeless one, as much of a mystery today as it was in 1848.

The Annotated Pride and Prejudice

Middlemarch
Back to Top