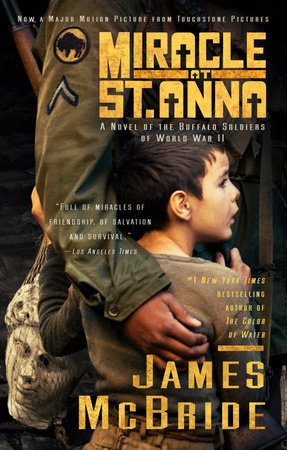 INTRODUCTION
With his bestselling memoir The Color of Water, James McBride created a fascinating story of growing up in the projects of Red Hook, Brooklyn and a vivid portrait of his indomitable mother. Now, in his first novel, he broadens his scope from personal history to the larger history of WWII and the little known role that black soldiers played in it.

The story begins in 1983 with the abrupt and unexplained shooting by Hector Negron, a New York City postal employee, of a man who wanted only to purchase a stamp. Why Hector has killed this man and how he came to possess the head of the statue of the Primavera, which had adorned the Santa Trinita bridge in Florence since the sixteenth century, is the mystery that Miracle at St. Anna sets out, in a most circuitous fashion, to solve.

Stepping back forty years, the novel plunges us into the world of the all-Negro 92nd Division, into the fierce fighting of WWII in the mountains of Italy, and into the hearts and minds of four unforgettable soldiers. It is a war in which the unquestioned racial attitudes of 1940s America take on life-and-death consequences on the battlefield, as white commanders willfully jeopardize their black troops. It is, as private Bishop says, “a white man’s war…. Niggers ain’t got nothing to do with it.” But when Sam Train, an illiterate giant of a soldier from North Carolina, saves a white Italian boy from the invading Germans, a journey begins that will take Sam, Bishop, Hector Negron, and Lieutenant Stamps far from their Division commanders to the remote mountain village of St. Anna di Stazzema. Here they will encounter the village witch, a beautiful young woman, partisan fighters led by the legendary “Black Butterfly,” and an Italian family that treats them with an equality they have never before experienced. More importantly, it is here, in the aftermath of a brutal Nazi massacre, that they will witness miracles and make the powerful discovery that “everybody got something to do with everything.”

With a view of the war that is both panoramic in its sweep and deeply personal in its exploration of the human spirit, Miracle at St. Anna brings to life a largely overlooked historical moment and extends the reach of James McBride’s considerable storytelling powers.

James McBride is an award-winning writer and musician. He has been a staff writer for The Washington Post, People magazine, and The Boston Globe. His memoir, The Color of Water, spent more than two years on The New York Times bestseller list, was published worldwide, and received the prestigious Anisfield-Wolf Book Award. As a composer, McBride has won the American Music Theater Festival’s Stephen Sondheim Award for his jazz/pop musical Bobos, and has composed songs for Anita Baker, Grover Washington, Jr., and Gary Burton. A jazz saxophonist, he has performed with Rachelle Farrell and with the legendary jazz performer Little Jimmy Scott. McBride lives in Pennsylvania.

Three Comrades
Back to Top