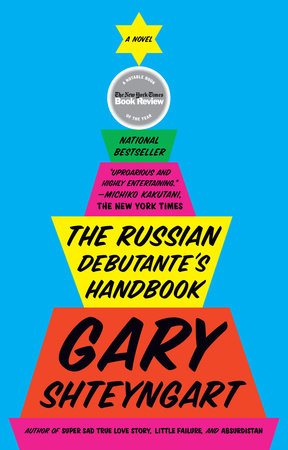 Vladimir Girshkin—twenty-five-year-old Russian immigrant, “Little Failure” according to his high-achieving mother, unhappy lover to fat dungeon mistress Challah (his “little Challah bread”), and lowly clerk at the bureaucratic Emma Lazarus Immigrant Absorption Society—is about to have his first break. When the unlikely figure of a wealthy but psychotic old Russian war hero appears and introduces Vladimir to his best friend, who just happens to be a small electric fan, Vladimir has little inkling that he is about to embark on an adventure of unrelenting lunacy—one that overturns his assumptions about what it means to be an immigrant in America.

The Russian Debutante’s Handbook takes us from New York City’s Lower East Side to the hip frontier wilderness of Prava—the Eastern European Paris of the ’90s—whose grand and glorious beauty is marred only by the shadow of the looming statue of Stalin’s foot. There, with the encouragement of the Groundhog, a murderous (but fun-loving) Russian mafioso, Vladimir infiltrates the American ex-pat community with the hope of defrauding his young middle-class compatriots by launching a pyramid scheme that’s as stupid as it is brilliant. Things go swimmingly at first, but nothing is quite as it seems in Prava, and Vladimir learns that in order to reinvent himself, he must first discover who he really is.

Gary Shteyngart was born in Leningrad, USSR, in 1972, and came to the United States seven years later. He won the Stephen Crane First Fiction Award and was listed by Book Magazine as one of the Top Ten debuts of 2002 for his novel, The Russian Debutante’s Handbook.

The Music of Chance
Paul Auster

All That Is
James Salter

The Fortress of Solitude
Jonathan Lethem

The Tsar of Love and Techno
Anthony Marra

A Box of Matches
Nicholson Baker

A Slipping-Down Life
Anne Tyler
Back to Top