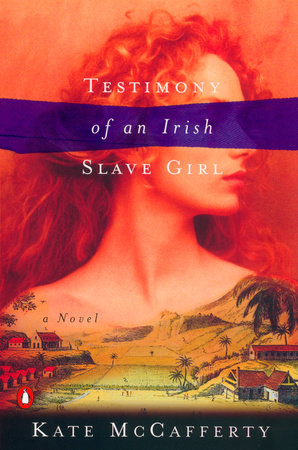 Kate McCafferty’s searing first novel explores a little-known episode of seventeenth-century history when colonial England forced thousands of Irish to labor in the sugarcane fields of Barbados. McCafferty delves into this rich historical terrain through the eyes and voice and memory of Cot Daley, kidnapped by the English when she was ten and shipped to the West Indies. Cot’s testimony to Peter Coote, the ambitious apothecary sent to discover why Irish servants joined forces with African slaves to rebel against their English masters, takes the form of a rambling narrative, filled with digressions and self-reflections. Still defiant even though she has just been flogged, Cot insists on telling the facts of the uprising her way, and her way turns out to be not so much an unraveling of the plot to rebel as a moving and wide-ranging personal history.

The difference between what Peter Coote wants to hear and what Cot Daley wants to say lies at the very heart of the novel. Coote wants to know how and why the rebellion occurred and why Cot joined it. But Cot wants to express the evolution of her emotional life during the many years she has spent on the island. Peter wants facts he can deliver to his own masters to use for their purposes, but Cot wants him to know not just facts but how it feels to be a slave, to have one’s child taken away, to suffer the brutality and indignity of being treated like an animal. Thus, Coote gets more than he bargains for, as Cot’s story stretches out far beyond his comfort level into areas of human experience he’d rather not hear about. Coote is a doctor and at moments his natural human empathy emerges, allowing him to feel connected to Cot on a deeper level than interrogator to witness. After all, he too feels pressure from above, as those of higher military and aristocratic rank treat him with barely concealed contempt and order him to do their bidding, much in the same way as he issues orders to his servant Lucy and to Cot herself. Like Cot, Coote is also familiar with sadness and disappointment. His dreams of owning land in the colonies, of having a wife and family, of bringing honor to the British Empire and to himself have thus far been unfulfilled. At one point, a senator’s wife even says to him, “His Excellency says you’re up and coming. Cot, is it? Peter Cot?” (p. 109). This momentary confusion of names reveals an underlying similarity between Cot and Coote that has significant consequences for how we read the novel. For it is really a novel about connection, about who we identify with, who we see as being like us and who we cast out as different.

Initially, Cot identifies with her masters. She longs for the captain of the ship that brings her to Barbados to keep her. Once on the island, she falls in love with her first master, Henry Plackler, dreaming that he might take her away with him. Cot even betrays her fellow slaves and servants when she warns Plackler of their plot against him. She learns to hate herself, because others despise her, but she says “the one thing I never thought to hate was my master or my mistress. For those who harmed me were also the only ones who could redeem me from worse harm” (p. 94). But for this betrayal she feels a lasting remorse, and when she marries the African slave Quashey and begins to see all that the Africans and Irish have in common, she shifts her allegiance from the oppressors to the oppressed. Peter Coote, who hears her story, who indeed transcribes it for us, is not yet able to make such a leap. But Testimony of an Irish Slave Girl offers us a rich testament to why such a leap is so important.

Kate McCafferty was born in the United States and received her Ph.D. in English. Since then she has taught English in colleges all over the world. She has published essays, poems, and short fiction pieces in a number of publications.Testimony of an Irish Slave Girl is her first novel.

A CONVERSATION WITH KATE MCCAFFERTY

What prompted you to write Testimony of an Irish Slave Girl? Do you feel a personal connection to the historical events on which the novel is based?

When I was in Graduate School a professor mentioned the special breeding of Irish and African slaves in Barbados, to produce the favored concubine of British officers in the North American colonies. That was the first of maybe fifty linked prompts that accumulated as I did research. I feel a very strong personal connection to not only Irish historical events, but also those that are related to gender treatment, class and race issues, etc.

What kind of research did you do for the novel? What discoveries most surprised you?

I researched histories of slaves in the Sugar Islands and the repercussions of British rule in West Ireland from 1580-1690 in particular. But I also found ships’ logs, studied the geography of the island, found snippets of sales of slaves, read burial practices and plantation birth/death records, etc. I learned a lot about the economies of sugar and the rise of the merchant class in England in terms of its conflict with deeply engrained class values left over from a feudal era. The research was just fascinating.

How do you think England’s oppression of the Irish in the seventeenth century is related to current troubles between the two nations?

The current troubles in the six counties have a great deal to do with class rather than religion, which is commonly blamed. In addition, the same inability to value the Irish as full human beings is not, unfortunately, a thing of the past: only after the Good Friday Agreement did nationalist, native (as opposed to the scions of plantation) Irish get to represent their own communities in Parliament, for example.

The novel makes many references to Eden, to the garden paradise that Barbados seems both to echo and invert. Why did you want to link the Biblical story of the Fall to your story?

It wasn’t deliberate. But now that you’ve brought it out, I think two things. First of all, I guess I believe that no matter how lovely a geographical setting, we must make our own heavens from manmade hells. My favorite work of Shakespeare is The Tempest—and that was the setting of a questionable Caribbean paradise. Its native Adams and Eves had already fled by the seventeenth century, and Cot Daley and Peter Coote had to bite different apples than the Arawaks…

Cot speaks of Quashey’s Jihad, or Holy War, for freedom, words which might make contemporary American readers uneasy. Could you expand upon your sense of the true meaning of Jihad?

I was teaching in the Middle East and polled colleagues and students about what the Koran was really saying (all this long before 9/11, of course). The interpretations I got were pretty uniform, namely that there are two jihads. The little one is in the external world, if needed, and is as much by words or pen as by the sword. But “the big jihad,” everyone agreed, is internal and has to do with trying to live a decent, peaceful, and compassionate life.

In your Acknowledgments you mention Mary Reynolds’ matter-of-fact acceptance of Testimony of an Irish Slave Girl‘s relevance. Were you initially uncertain about this? What do you now see as the novel’s chief significance for our time?

There’s been a recent trend against histories in the genre of novel. I think it’s a kind of postmodern stance, as if looking at history, in the age of the Pentium 4, isn’t going to help us now. But it was my intention to point at certain experiences and patterns of power that have gone on, and are still going on, and are often smoke screened by issues like race. People use each other for profit, sometimes unto death, and we will never know “brotherhood” until we deal with that universal.

What other novels dealing with the slave trade would you recommend to readers?

Who could miss Beloved, by Toni Morrison? What a wonderful gift to humanity! And Frantz Fanon’s The Wretched of the Earth. But also those works not dealing with U.S. slavery: I read something when I was in Saudi Arabia by a woman who had been enslaved and used as a servant. And also those that deal with slavery after the slave trade, like Aimee Cesaire’s Lost Bodies.