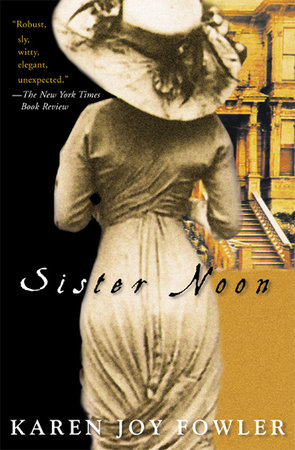 INTRODUCTION
The fiction of Karen Joy Fowler has been hailed as “powerfully imagined and delightfully readable” (The Washington Post). The New York Times praises her “willingness to take detours, her unapologetic delight in the odd historical fact, her shadowy humor, and the elegant unruliness of her language.” Now this critically acclaimed writer introduces readers to Lizzie Hayes, a remarkable heroine born into a wild, dazzling, unrestrained and uninhibited age that could not have existed at any other time in our nation’s history.

San Francisco during the Gilded Age is a city bursting at the seams—a thrilling, electric, somewhat unsavory place of newly paved streets and cable cars running up and down Nob Hill, of unbridled egos and flamboyant ambition, of gentility, gossip, and greed… where great fortunes and dynasties are being built that will outlast many of the city’s colorful, eccentric inhabitants.

A spinster just past forty, Lizzie is at once a part of and separate from, the city’s dazzling vitality and ostentatious elitism. A devout, fiercely intelligent woman given to ironic self-reflection and filled with hidden passions, Lizzie spends her days as a volunteer and treasurer for the Ladies’ Relief Home, a refuge for the poor and displaced commonly called the Brown Ark. It is here that Mary Ellen Pleasant, the city’s most scandalous benefactress, suddenly appears one day to deposit a little girl named Jenny. This brief visit becomes the catalyst for Lizzie’s gradual transformation. She has never met anyone like Mrs. Pleasant. Or Madame Christophe, as she was known in her native New Orleans, where she was born into slavery. Or Mrs. Ellen Smith, as she called herself in 1852, a strikingly beautiful widow who would become as famous for her affairs, marriages, shocking behavior, and rumored voodoo powers as for her stunningly mismatched eyes. Lizzie, who is fat, unlovely, and unloved, is intrigued and excited by this fascinating woman who opens a window onto a world Lizzie has only read about, a world as much of the imagination and senses as it is of one firmly grounded in reality. For, as Mrs. Pleasant tells her, “You can do anything you want. You don’t have to be the same person your whole life.”

Karen Joy Fowler’s most masterful achievement, Sister Noon, is a lush, stylistically daring, brilliantly realized portrait of a vanished era and an extraordinary woman that will shimmer and haunt readers long after the final page is turned.

Karen Joy Fowler is the author of two previous novels, Sarah Canary and The Sweetheart Season, both New York Times Notable Books, as well as Black Glass, a short story collection. She was nominated for the 2002 PEN/Faulkner award for Sister Noon. She lives in Northern California.

“An astonishing voice, at once lyric and ironic, satiric and nostalgic. Fowler can tell stories that engage and enchant.”
—San Francisco Chronicle

“Sister Noon is funny, lyrical, spooky, inspired… A work of enchanting rumination—and one of the year’s best reads.”
—The Seattle Times

“Fowler has a voice like no other, lyrical, shrewd and addictive, with a quiet deadpan humor that underlies almost every sentence.”
—Newsday

“The novel unfolds in mysterious and, at times, supernatural ways.”
—Cleveland Plain Dealer

“In Sister Noon, Fowler thrillingly recreates a lost world… No contemporary writer creates characters more appealing, or examines them with greater acuity and forgiveness than she does.”
—Michael Chabon, bestselling author of The Amazing Adventures of Kavalier and Clay

“Reading Sister Noon is like staring at early photographs until the eyes begin to shine and your head is filled with voices which urge you to recall that these vanished lives, and your own, are stranger than you allow. A dazzling book.”
—Jonathan Lethem, bestselling author of Motherless Brooklyn

The Linnet Bird
Back to Top