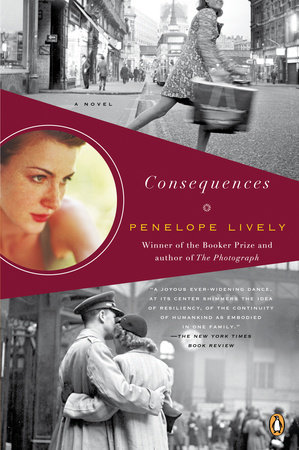 INTRODUCTION
Exploring the relationship between past and present, and the connections that lead people to retrace the steps of their ancestors, sometimes unconsciously, Penelope Lively’s fourteenth work, Consequences, journeys through time and space.

The story begins with a chance encounter on a park bench—Lorna, a girl increasingly uncomfortable with her well-to-do London lifestyle, meets Matt Faraday and for the first time feels as though she can control her own future. Matt is an artist, a working-class “tradesman” of whom her parents cannot approve. Still, Lorna and Matt fall recklessly, madly in love. Ignoring the as-yet far-off rumble of World War II and the sweeping changes it will bring, they marry quickly and without ceremony, eschewing the trappings and expectations of both their families, and head for a secluded cottage in Somerset. But despite their efforts to shut out the world, the Faradays’ idyllic life is devastated by the war when Matt is called to action and is killed overseas.

Twenty years later, Matt and Lorna’s daughter, Molly, turns a long-shot job interview into a position rubbing elbows with higher society—the world of her now-dead mother and distant grandparents—where she is introduced to wealthy James Portland. Despite his marriage to another woman, the two begin an affair. When she becomes pregnant, James proposes divorcing his estranged wife to marry her. Instead of accepting and settling into marriage with a man she does not love, Molly challenges the assumptions of her era to forge a life for herself and her daughter, Ruth, based on staunch independence and a kind of bohemian freedom. But at mid-life she feels incomplete and fears that she has not given her daughter the tools with which to build her own happiness.

In the end it is Ruth—raised in a family untraditional in every way with the specter of her grandparents’ romance always haunting the edge of her experiences—whose disconnection with a sense of self and dissatisfaction with her own life choices leads her to her grandfather Matt’s grave in Crete—and back to 1941. And with a labyrinthine journey to the Somerset cottage, Ruth’s questions about her place in the inexorable forward-march of time (and its strange ability to bend back on itself) may finally lead her to something she didn’t know she’d been missing.

A love story spanning three generations, Consequences is a powerful story of growth, death, and rebirth of one family set against the backdrop of the twentieth century—its major and minor events, its shaping of public consciousness, and its changing of lives.

“Penelope Lively grew up in Egypt but settled in England after the war and took a degree in history at St Anne’s College, Oxford. She is a Fellow of the Royal Society of Literature, and a member of PEN and the Society of Authors. She was married to the late Professor Jack Lively, has a daughter, a son, and four grandchildren, and lives in London.

Lively is the author of many prize-winning novels and short story collections for both adults and children. She has twice been shortlisted for the Booker Prize; once in 1977 for her first novel, The Road to Lichfield, and again in 1984 for According to Mar. She later won the 1987 Booker Prize for her highly acclaimed novel Moon Tiger. Her novels include Passing On, shortlisted for the 1989 Sunday Express Book of the Year Award, City of the Mind, Cleopatra’s Sister, Heat Wave, and The Photograph, which was a Today show summer book club selection.

Lively has also written radio and television scripts and has acted as presenter for a BBC Radio 4 program on children’s literature. She is a popular writer for children and has won both the Carnegie Medal and the Whitbread Award.