The Last Summer (of You and Me) Reader’s Guide 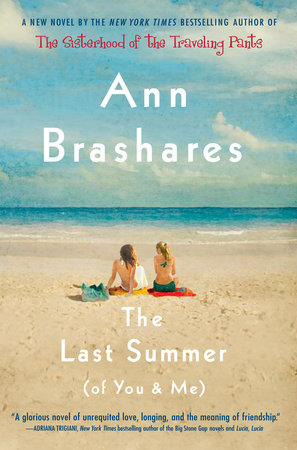 The Last Summer (of You and Me) Reader’s Guide

print
The Last Summer (of You and Me) Reader’s Guide

INTRODUCTION
In The Last Summer (of You & Me), author Ann Brashares explores the exhilaration and anguish of leaving adolescence. Telling the story of three lifelong friends – Alice, her sister Riley, and their neighbor Paul – who struggle to maintain their purity against the world’s many compromises and betrayals, the novel captures both the innocent yearnings of childhood and the more complex desires of adulthood. As the former inevitably yields to the latter, the relationship between the three friends realigns in a complex dance of passion, guilt, and love, opening up new possibilities while closing off others forever.

As the story opens, it has been three long years since Alice last saw Paul at their summer home on Fire Island. While her sister Riley has always maintained contact with Paul during the off-seasons, Alice’s relationship with him has been defined by their silences between summers. As she awaits his arrival on the afternoon ferry, Alice tries to deny that her feelings for Paul have grown beyond friendship. She knows that they are not reciprocated, and even if they were, to change the nature of their relationship would constitute a kind of betrayal of the bond they share with her sister.

Paul has avoided returning to Fire Island these past years because he fears what will happen when he does. Although he fights it with all his will, the truth is that he is in love with Alice and probably always has been. And then there is Riley, the kindred spirit of his childhood who somehow remains frozen in time both physically and emotionally. As much as Paul wishes he could join her in her state of perpetual childhood, the demands and longings of the adult world are pulling him in the opposite direction.

At first, the three of them fall right back into their old patterns – Paul and Riley forging off on adventures, Alice always left a few steps behind. But soon the attraction between Alice and Paul breaks to the surface, and they embark on an intense love affair tinged with guilt over the friend and sister they have left behind. That guilt is seemingly made manifest when Riley is suddenly struck with a life-threatening illness.

Dreading the attention and pity her condition is sure to elicit, Riley begs Alice not to tell Paul what has happened, and in so doing drives a wedge between the burgeoning couple. As Alice and Paul nurse regrets and resentments over the long, cold winter, Riley’s health continues to deteriorate. Trying desperately to hang onto the lost bliss of their childhood, Alice, Paul, and Riley instead must face their futures. The road to that future is both heartbreaking and deeply moving, offering the promise of new life even in the face of immense loss.

Ann Brashares is the author of the young adult novels The Sisterhood of the Traveling Pants, The Second Summer of the Sisterhood, Girls in Pants, and Forever in Blue. The Last Summer (of You and Me) is her first novel for adults.

Learn More About The Last Summer (of You and Me)
print

Tomorrow There Will Be Sun
Dana Reinhardt
Back to Top