The Rain Before It Falls Reader’s Guide 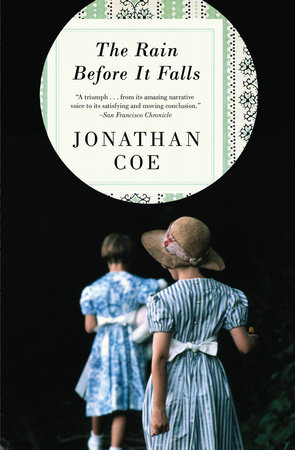 The Rain Before It Falls Reader’s Guide

print
The Rain Before It Falls Reader’s Guide

“A triumph . . . from its amazing narrative voice to its satisfying and moving conclusion.”
—San Francisco Chronicle

The introduction, questions, and suggestions for further reading that follow are designed to stimulate your group’s discussion of The Rain Before It Falls, Jonathan Coe’s extraordinary novel about the unveiling of one’s family secret history in postwar England.

The Rain Before It Falls is a complex and richly layered novel. It is filled with stories within stories, and the novel itself consists largely of written reproductions of spoken narrations, which are themselves elaborate descriptions of photographs. In The Rain Before It Falls, reality—whatever that may be—comes to readers through a series of filters but with all the immediacy and vividness of life itself.

After her aunt Rosamond dies, Gill finds a box full of audiotapes that Rosamond has left for Imogen, the granddaughter of her cousin and close friend, Beatrix. After failing to locate Imogen, Gill listens to the tapes herself, inviting her own two daughters to listen along with her, and what they hear is not only Rosamond’s life story, but what Gill describes as “the gradual unveiling of their family’s occult, unsuspected history.” Rosamond’s story begins with the London blitz during WWII and her forced relocation to the safety of an aunt and uncle’s Shropshire farm. Here she develops a deep friendship with her cousin Beatrix, a child unloved by her parents and treated with a coldness bordering on cruelty. As her narrative progresses, with memories arising and proliferating as she describes a series of twenty photographs to the blind Imogen, the story becomes more dramatic and more troubling. Rosamond feels compelled to tell these stories so that Imogen, who was taken from her mother and placed with foster parents, will know the truth of her own family history and Rosamond’s role in it. Indeed, Rosamond wants Imogen to see the history of abuse that has led to her own tragic situation. Beatrix had abused her daughter, Thea, at one point chasing her through the house with a knife, until Rosamond intervened. Thea, in turn, will hand down the abuse to her own daughter Imogen.

But the novel is about much more than abuse. It is a searching investigation of one woman’s consciousness, as the childless and gay Rosamond looks back over her life and the children—Thea and Imogen—she loved so deeply but was unable ultimately to protect. It is a story about the power of story and memory to help us see our history. Indeed, Gill is profoundly moved by Rosamond’s narrative, and is brought by it to the brink of a powerful revelation about the nature of life. It is also a meditation on finding meaning—or perhaps imposing it—in life’s apparent chaos. Like life itself, The Rain Before It Falls is impossible to summarize, and impossible to forget.

1. How does the narrative structure of The Rain Before It Falls affect the way readers respond to it? What is the significance of Gill and her daughters being the primary—though not the intended—audience for Rosamond’s spoken narration? In what ways is the “reality” of the novel filtered in its telling?

2. As she is discussing the second photograph, Rosamond offers this aside to Imogen: “There is a reason for everything, in case you haven’t learned it yet, in your short life. In fact, the story I am trying to tell you will demonstrate as much—if I tell it properly” [p. 45]. Does Rosamond’s story succeed in making clear that there is “a reason for everything”?

3. Gill sees Rosamond’s story as the “gradual unveiling of their family’s occult, unsuspected history” [p. 129]. Why does she choose the word “occult”?

4. Rosamond complains: “What a deceitful thing a photograph is. They say memory plays tricks on one. Not nearly as much as a photograph does, in my view” [p. 168]. In what ways do the photographs she describes have the power both to reveal and to conceal? What other comments does she make about the nature of photographs throughout the novel?

6. Beatrix is unloved by her mother and proves to be an abusive mother herself to Thea, who in turn shakes her own daughter, Imogen, so violently that she blinds her. What does the novel imply about how familial suffering is handed down from one generation to another?

7. Rosamond says, “The important thing, as I must always remember, is that I describe the picture to you, that I help you to see” [p. 156]. Why is this so important to Rosamond? How is its importance altered in light of the end of the novel, when we learn that Imogen has died and that Rosamond’s words will never reach her, at least in this world? Is Rosamond really speaking to herself—helping herself to see—in her narrations of these photographs? If so, for what purpose?

8. After Imogen is given to a foster family, Ruth tells Rosamond to “wipe the slate clean. Forget them. Forget all of them” [p. 218]. Clearly she has not been able to forget them. Should she have? Of what value are her memories of Beatrix and Thea and Imogen?

9. What role does Rosamond’s own childlessness—and her periods of intense loneliness—play in her relations with Thea and Imogen?

10. Late in the novel, Rosamond says that “life only starts to make sense when you realize that sometimes—often—all the time—two completely contradictory ideas can be true” [p. 215]. What experiences have brought her to this truth? How does it help explain the major characters and their behaviors in the novel?

11. Why does Gill feel, looking back at the extraordinary coincidences that have been revealed to her, that “Nothing was random, after all. There was a pattern: a pattern to be found somewhere…” [p. 238]? Does the novel seem to suggest that there is a grand design governing the apparent randomness of life? What events in the novel would support such a view?

12. At the very end of the novel, Gill seems to be on the threshold of a revelation of the profoundest importance. “Surely she was being offered something precious beyond belief, some supreme revelation. There was meaning in all this . . .” [p. 240]. What is the significance of her daughter’s distressed phone calls keeping Gill from receiving this revelation? Is Coe perhaps suggesting that attending to her daughter’s pain is more important than whatever insight Gill might have had?

13. How are readers to understand the novel’s final sentence: “What she had been hoping for was a figment, a dream, an impossible thing: like the rain before it falls”? [p. 240]. Is the narrator suggesting that meaning, in the largest sense, is an illusion?

14. An elderly woman describing and reminiscing about old photographs might not seem like the most promising premise for a novel. How does Coe make The Rain Before It Falls such a fascinating read?

15. Many novels in the past several decades have explored the hidden complexities of family life. What does The Rain Before It Falls add to this exploration? In what ways is it unconventional and unique?

Jonathan Coe’s awards include the John Llewellyn Rhys Prize, the Prix du Meilleur Livre Étranger, the Prix Médicis Étranger, and, for The Rotters’ Club, the Bollinger Everyman Wodehouse Prize. He lives in London with his wife and their two daughters.

A Game of Hide and Seek
Elizabeth Taylor

The Virgin in the Garden
A. S. Byatt

The Sweet Indifference of the World
Peter Stamm

The Stars Are Not Yet Bells
Hannah Lillith Assadi

Klara and the Sun
Kazuo Ishiguro

The Sanatorium
Sarah Pearse
Back to Top