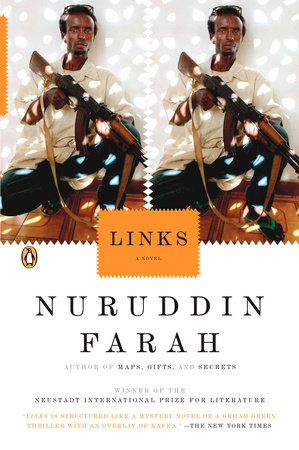 Links is set in a city that is at once shockingly foreign and hauntingly familiar: Mogadiscio, the capital of Somalis, just weeks after the U.S. troops have pulled out, leaving a decimated, starving city ruled by thuggish clan warlords and patrolled by qaat-chewing gangs who shoot civilians simply to relieve their adolescent boredom. This is the city so disturbingly captured by CNN cameras and in Black Hawk Down, but from a startlingly different—and surprising—point-of-view.

Jeebleh is returning to Mogadiscio from New York for the first time in twenty years. Equipped with a clear-minded Americanized perspective and ready to attend to business, this journey is not a nostalgia trip for him—Jeebleh’s last residence here was a jail cell. And who could feel nostalgic for a city like this?

Jeebleh is returning to visit his mother’s grave and to settle her outstanding accounts—but more urgently, the youngest member of his oldest friend’s family has been abducted. Though they have not seen each other in two decades, Jeebleh knows from their childhood that his friend—a virtual brother, who remained in Somalia when Jeebleh left – will need Jeebleh to step in. Jeebleh is determined to cut through the swirling, clan-based violence and corruption to rescue the little girl—and, perhaps, a piece of his own identity. Jeebleh’s adventure pulls him (and us) into a whirlwind tour of a city where nothing—family or friendship, loyalty or gratitude, betrayal or resentment, tradition or modernity—is simple.

Gripping, provocative, and revelatory, Links is the finest work yet from Farah, a novel that will secure his place in the international literary firmament and stand as a classic of modern world literature.

Widely recognized as not just “one of the finest contemporary African writers” (Salman Rushdie) but as “one of the most sophisticated voices in modern fiction” (New York Review of Books), Nuruddin Farah is the author of eight novels. His fiction has been translated into more than a dozen languages and won numerous awards, including the 1998 Neustadt International Prize for Literature, “widely regarded as the most prestigious international literary award after the Nobel” ( New York Times).

Born in Somalia, Farah was persona non grata in his native country for over twenty years, able to visit Mogadiscio for the first time in the late 1990s. He currently lives in Cape Town, South Africa.

The Man From Saigon
Marti Leimbach

Chronicler of the Winds
Henning Mankell

The Garden of Ruth
Eva Etzioni-Halevy

419
Will Ferguson
Back to Top