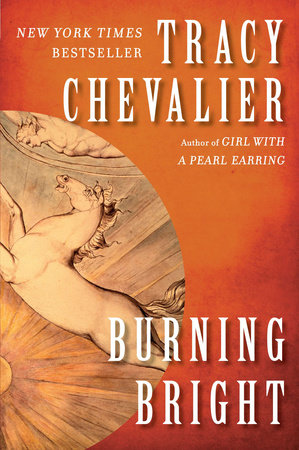 Burning Bright follows the Kellaway family as they leave behind tragedy in rural Dorset and come to late 18th-century London. As they move in next door to the radical painter/poet William Blake, and take up work for a near-by circus impresario, the youngest family member gets to know a girl his age. Embodying opposite characteristics – Maggie Butterfield is a dark-haired, streetwise extrovert, Jem Kellaway a quiet blond introvert – the children form a strong bond while getting to know their unusual neighbor and his wife.

Set against the backdrop of a city nervous of the revolution gone sour across the Channel in France, Burning Bright explores the states of innocence and experience just as Blake takes on similar themes in his best-known poems, Songs of Innocence and of Experience.

“I was born and grew up in Washington, DC. After getting a BA in English from Oberlin College (Ohio), I moved to London, England in 1984. I intended to stay 6 months; I’m still here.

“As a kid I’d often said I wanted to be a writer because I loved books and wanted to be associated with them. I wrote the odd story in high school, but it was only in my twenties that I started writing ‘real’ stories, at night and on weekends. Sometimes I wrote a story in a couple evenings; other times it took me a whole year to complete one.

“Once I took a night class in creative writing, and a story I’d written for it was published in a London-based magazine called Fiction. I was thrilled, even though the magazine folded 4 months later.

I worked as a reference book editor for several years until 1993 when I left my job and did a year-long MA in creative writing at the University of East Anglia in Norwich (England). My tutors were the English novelists Malcolm Bradbury and Rose Tremain. For the first time in my life I was expected to write every day, and I found liked it. I also finally had an idea I considered ‘big’ enough to fill a novel. I began The Virgin Blue during that year, and continued it once the course was over, juggling writing with freelance editing.

“An agent is essential to getting published. I found my agent Jonny Geller through dumb luck and good timing. A friend from the MA course had just signed on with him and I sent my manuscript of The Virgin Blue mentioning my friend’s name. Jonny was just starting as an agent and needed me as much as I needed him. Since then he’s become a highly respected agent in the UK and I’ve gone along for the ride.”

The Wife, the Maid, and the Mistress

Girl in a Blue Dress

The Song of Hartgrove Hall

The Last Time I Saw Paris
Back to Top