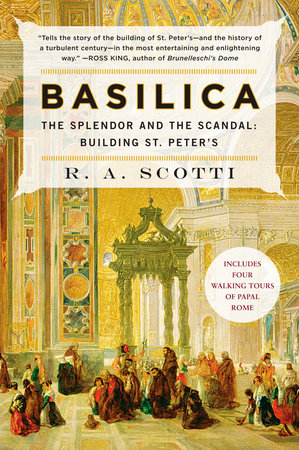 INTRODUCTION
Covering nearly four acres and soaring 425 feet at its highest point, St. Peter’s Basilica is both a monument to the glory of God and a testament to the genius, ambition, and will of men. R. A. Scotti’s Basilica chronicles the epic construction effort behind this architectural treasure. Propelled by artistic inspiration, social upheaval, and political intrigue, the story spans two centuries and includes larger-than-life characters.

Pope Julius II—who took both his name and his disposition from the Roman emperor—conceived St. Peter’s at the height of the Renaissance to replace Constantine’s fourth-century basilica. It was completed some 150 years later during the Baroque papacy of Alexander VII. Along the way, the printing press revolutionized mass communication, the Catholic Church was shaken by the twin earthquakes of the Reformation and the Counter-Reformation, and a vast New World was mapped across the Atlantic.

St. Peter’s is “catholic” in the truest sense of the word, encompassing aesthetic principles from classical Greece, ancient Rome, the Renaissance, and the Baroque. It brought together the greatest artistic and architectural minds of the time. Bramante, the basilica’s first architect, drew inspiration from the architecture of imperial Rome. His initial designs for the basilica—emphasizing proportional harmony and the aesthetics of space—were modified, embellished, and enhanced over the decades by a succession of legendary artists, including Raphael, Michelangelo, and Bernini.

St. Peter’s was not only an artistic triumph, but also a feat of engineering. Bramante envisioned “the dome of the Pantheon raised on the shoulders of the Basilica of Maxentius.” Yet the techniques used to create such masterworks of engineering had long since been lost to antiquity. Through scientific investigation, leaps of ingenuity, and luck, the builders recaptured this technology and accomplished such seemingly impossible tasks as raising the massive dome and repositioning Caligula’s 320-ton obelisk.

While work on St. Peter’s sputtered forward, the fortunes of the church it represented underwent dramatic reversals. Julius II’s triumphant war to reclaim the Papal States was followed by the excesses of his successor, Leo X, which spurred the rebellion of Martin Luther and sparked the Protestant Reformation. By the papacy of Clement VII, the Vatican’s extravagant expenditures on the basilica—both a symbol and a product of the Catholic Church’s fiscal and moral excesses—culminated with Charles V’s savage sack of Rome. Yet as the Reformation gave way to the Counter-Reformation, and both the city of Rome and the papacy struggled to rebuild; St. Peter’s was transformed into a symbol of healing and unity, its vast scale becoming a kind of atonement for the Church’s equally vast transgressions. With the 1667 erection of Bernini’s colonnade, construction came to an end, and the magnificent basilica stood at the center of a Catholic Church that Julius II could scarcely have imagined.

ABOUT R. A. SCOTTI

R. A. Scotti is the author of two previous works of nonfiction, including Sudden Sea: The Great Hurricane of 1938, and four novels.

A CONVERSATION WITH R. A. SCOTTI

What was your most surprising discovery in the course of researching the book?

This is more a conundrum than a discovery. Was the Basilica—the wonder of the High Renaissance and, ever since, the visible symbol of the Catholic Church, an architectural marvel recognized around the world—worth the spiritual, social, and political cost? Namely, the splintering of the Christian world.

Has architecture always been a particular passion of yours, or was St. Peter’s your inspiration for exploring it?

As I explain in the Author’s Note, St. Peter’s was the inspiration. The overwhelming emotion of coming upon the Basilica for the first time when I was a nineteen-year-old naïf has stayed with me always.

Do you look at St. Peter’s differently today—having spent so much time exploring its secrets—than you did before writing the book? Has the magic of the place been diminished or enhanced?

The magic can only be enhanced. First is the staggering fact that such an immense and ambitious edifice was erected with little more than manual tools. Add to that the wonder of how an architectural marvel emerged from such a confusion of ideas, talents, temperaments, and political machinations, and St. Peter’s truly seems to be a miracle in stone.

What do you hope readers will take away with them after reading Basilica?

An appreciation that the greatest accomplishments are not achieved in a smooth path. If you persevere through conflict, missteps, tragedy, delays, setbacks, and reversals of every kind, the goal can be reached triumphantly. Also, an understanding that the Catholic Church is not a monolith, and that an institution that has endured for 2000 years through the best and the worst merits serious, unbiased study.

The Civilization of the Renaissance in Italy
Jacob Burckhardt

The Civilization of the Renaissance in Italy
Jacob Burckhardt

The Battle for Christmas
Stephen Nissenbaum

The Pursuit of Glory
Tim Blanning

The History and Topography of Ireland
Gerald of Wales

What the Ermine Saw
Eden Collinsworth

The Third Horseman
William Rosen
Back to Top