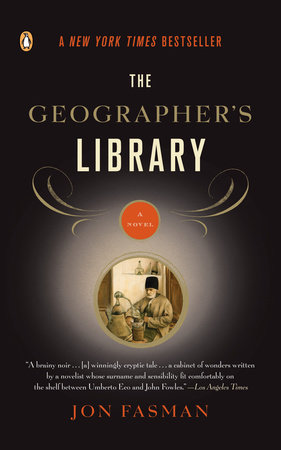 INTRODUCTION
Stretching through time and around the world, The Geographer’s Library is an accomplished debut from Jon Fasman. With his remarkable command of language and suspense, Fasman has crafted a novel that explores how interconnected lives and deaths across countless years can collide in a single moment.

Few humans are able to escape being swallowed up by history. What is comforting, however, is that history usually waits until after we are gone to completely consume us. Paul Tomm is not so fortunate. What seems to be a routine death in a quiet New England town soon unfolds across continents and centuries as it threatens to completely overwhelm him.

As a reporter for a small local newspaper, it is Paul’s job to compile an obituary for a reclusive old professor from Wickenden, Paul’s alma mater, who was found dead at home. And so Paul begins the usually monotonous and uneventful task of gathering the necessary information. There is no family. The medical examiner has a few questions about the immaculate condition of the victim’s internal organs, but that line of questioning ends abruptly with the doctor’s unexpected death by a hit-and-run driver. Another of Paul’s sources, a thirty-one-year-old (and rather attractive) young lady, proves to offer more in the way of companionship than a scoop.

But there is clearly more to this story than a few lines in the obit column. Who made the anonymous call reporting the death? A macabre threat left on Paul’s front door makes it clear that there is a larger story, a story that doesn’t want to be written. With a little help from his gruff but caring editor, a former professor, and a small-town cop who cannot seem to stay out of trouble, Paul begins to unravel a story that becomes more mysterious with every new detail. As he investigates, the reader becomes acquainted with a series of objects that tell the history of alchemy and is offered chilling glimpses of life in the former Soviet Union, where even a person’s very breath is not his own.

As the body count increases, Paul begins to feel more and more pressure—from gentle to violent—to call off his fact-finding mission and let the dead bury the dead. His stubbornness, fueled by a drive to further his career, threatens not only to end his newfound relationship but nearly costs him his life.

Jon Fasman was born in Chicago in 1975 and grew up in Washington, D.C. He was educated at Brown and Oxford universities and has worked as a journalist in Washington, D.C., New York, Oxford, and Moscow. His writing has appeared in The Times Literary Supplement, Slate, Legal Affairs, the Moscow Times, and The Washington Post. He is now a writer and an editor for The Economist‘s website.

What sparked your interest in alchemy?

I first came across alchemy in graduate school, when I decided that the best way to understand Renaissance English drama would be to write about medical history and the philosophy of emotion (not as tortuous as it sounds: see Burton’s marvelousThe Anatomy of Melancholy for the bridge). Alchemy fascinated me because it seemed a way of investigating the world scientifically but without the scientific method and empirically but with precepts derived from theory rather than observation. Though it has a dodgy reputation now on scientific grounds (totally justified) and as a screen for wealth generation via turning lead into gold (reductive, and less justified), it remains a beautiful pastiche of science, theology, philosophy, and total malarkey.

Please tell us about the process of researching this novel. Have you visited many of the far-flung places where the book is set?

I have visited some, but not all; books and a vivid imagination had to suffice when plane tickets were not at hand.

You make great use of the world of academia as a backdrop for mystery. Why do you think colleges lend themselves so nicely to fiction?

That’s an excellent question. I think any sort of cloistered world, near but not entirely of the so-called real world, makes an excellent setting for fiction (consider, for instance, Eco’s abbey in The Name of the Rose, or Ellis Peters’s Cadfael series), and I suppose modern readers and writers are more likely to have spent time at a college than in a monastery or prison.

In what ways has your previous work as a reporter influenced your writing?

Reporting taught me that I could make a living out of my curiosity and my natural tendency to be quiet whenever possible, for as long as possible, as soon as someone else starts talking. I was a reporter before I swerved back into academia, and I moved to Russia intending to restart my reporting career; way in the back of my mind I had a pipe dream of writing a novel. It was only when I didn’t get any responses to my query letters and pitches that I started writing The Geographer’s Library.

The complex plot of The Geographer’s Library has you shifting narration and writing from numerous points of view. Did any of these approaches prove more difficult to handle than others?

Strangely, I found Paul’s section toughest, because I was concerned about getting things “right” in describing Lincoln and Wickenden (both of which have real-life inspirations). I felt much freer to imagine places I hadn’t been than places I had.

Being a young novelist offers you the chance to mentor and advise aspiring novelists. What advice would you offer?

Remember, always remember above everything else, that writing is simply about writing and reading. It isn’t about adopting “writerly” opinions or sitting in a café with a laptop and a “writerly” novel on display. Writers are, by definition, those who write. If writing is what you want to do, read books recommended by people whose opinions you trust, and start churning out the words. Don’t worry about the trappings.

What authors do you most admire? What books have been particularly influential in the course of your development as a writer?

Too many to mention, in both cases. As much as I dislike the practice of separating fiction into genres, I have to acknowledge huge debts to writers such as Borges, Calvino, Kis, Conan Doyle, and Pavic, on the one hand, and Mosley, Pelecanos, Ellroy, and Chandler, on the other.

Another historical mystery, this time set in present-day Moscow and Washington, D.C.

Learn More About The Geographer’s Library
print
Back to Top