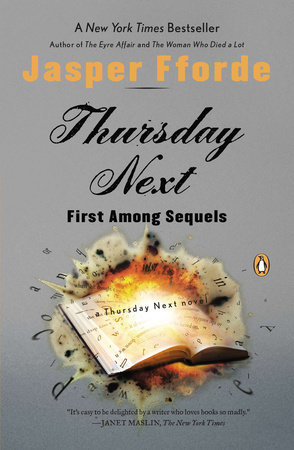 INTRODUCTION
It’s 2002, fourteen years after Thursday’s last adventure battling a rogue book character in the Outland. Swindon seems to have quieted down since the excitement of the 1988 SuperHoop. The politicians’ biggest concern these days is which act of idiocy would be the best way to spend the growing, unwieldy stupidity surplus. Thursday and her husband, Landen Parke-Laine, now have three children. Thursday has settled into a quiet, normal life, dropping out of the SpecOps and Jurisfiction games completely.

Or has she? The SpecOps units, formed to police the stranger crime elements such as supernatural and literary offenses, have officially disbanded; unofficially, however, they have gone underground, working quietly behind a business front that installs carpets across town. Despite her promises to Landen, Thursday has also been secretly policing the BookWorld with her Jurisfiction colleagues, and the death of Sherlock Holmes, the discovery of book probes, and falling Outland reading rates have put the BookWorld on edge.

In an effort to fill out the dwindling Jurisfiction forces, Thursday must mentor two apprentices—two very different doppelgängers born in the books written about her own life. One of them, Thursday5, is a hippie-dippy do-gooder from the fifth feel-good novel of Thursday’s adventures. The other, Thursday1–4, is an uncensored, oversexed gunslinger from the first four unauthorized novels. Thursday1–4 finally finds an opportunity to exact revenge on Thursday for her neglect of the factually challenged unauthorized series. As her first order of havoc-wreaking business, Thursday1–4, posing as the real Thursday, jumps into the Outland and into Thursday’s home. Before Thursday can reduce the rogue to text, Thursday1–4 steals her TravelBook, effectively locking her mentor out of the BookWorld completely.

Meanwhile, Thursday’s eldest child, Friday Next, is now a “grunty and unintelligible” sixteen-year-old. Friday is destined to become one of the ChronoGuard’s most respected and influential leaders—if Thursday can convince him to join in time to help invent time travel. Everyone in the Chronoguard, including a clean-cut overachieving alternate Friday, is campaigning to help her force Friday into the service of time. But if the real Friday knows his role in the invention of time travel, he’s refusing to give it up, despite threats to his existence.

While Thursday tries to find a way back into the BookWorld, her evil impostor gives the green light to a project that will rewrite the English classics, complete with audience call-in votes directing the story, starting with Pride and Prejudice. To save books from being turned into reality television shows, Thursday must turn to her sworn enemy, the Goliath Corporation. It has made progress on the Austen Rover, the first interliterary tour bus ever created. Goliath has solicited Thursday’s help to map the Rover’s entry into the BookWorld since, without it, they could easily wind up lost in the Nothing—vast, treacherous areas of abandoned Dark Reading Matter. But Goliath has ulterior motives in trying to jump into the BookWorld, and Thursday won’t find out until she’s trapped at sea in an excruciating moral dilemma. Can Thursday save the literary canon from decimation by creative democracy?

Learn More About Thursday Next: First Among Sequels
print

Songs of a Dead Dreamer and Grimscribe
Thomas Ligotti

The Woman Who Died a Lot
Jasper Fforde

The Case Against Satan
Ray Russell

One of Our Thursdays Is Missing
Jasper Fforde

Children of the Corn
Stephen King

If You Could See Me Now
Peter Straub

The Supernatural Enhancements
Edgar Cantero
Back to Top