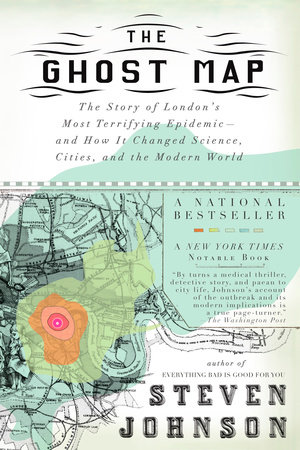 INTRODUCTION
“This is a story with four protagonists: a deadly bacterium, a vast city, and two gifted but very different men.” So begins Steven Johnson’s multi-layered account of the 1854 London cholera epidemic. London was just emerging as one of the first modern cities in the world, but it lacked the public health infrastructure to support its exploding population. As a result, the city became the perfect breeding ground for a deadly disease. Rising up against the dogma of the scientific community, two men, Dr. John Snow and Reverend Henry Whitehead, attempted to put a stop to the epidemic, and in doing so revolutionized the way we think of the spread of disease, the nature of scientific inquiry, and the rise of the modern city.

Steven Johnson is the bestselling author of Everything Bad Is Good For You, Mind Wide Open, Emergence, and Interface Culture. He is a Distinguished Writer in Residence at New York University’s Department of Journalism, and the founder of several influential websites, including FEED, Plastic, and, currently, outside.in. He lives in Brooklyn with his wife and their three sons.

PRAISE FOR THE GHOST MAP

“By turns a medical thriller, detective story and paean to city life, Johnson’s account of the outbreak and its modern implications is a true page turner.” —The Washington Post

“This is more than a great medical detective story. It’s the triumph of reason and evidence over superstition and theory, and Johnson tells it in loving detail.” —Chicago Tribune

“[An] unputdownable tale…This is a marvelous little book, based to a large extent on the essays delivered to an academic colloquium, just as was Dava Sobel’s Longitude. Yet The Ghost Map is a far more ambitious and compelling work…Wonderful.” —The Wall Street Journal

“Steven Johnson gives us history at its best: colorful, connected, and compelling. At the core is a medical mystery, or what today would be called an epidemiological detective story…A masterpiece of historical writing.” —Seattle Times

“Steven Johnson tells the tale with verve, spicing his narrative with scenes of Dickensian squalor and the vibrant street life surrounding that squalor. But in Johnson’s hands, The Ghost Map morphs into something more than mere history.” —San Diego Union-Tribune

The Invention of Nature
Andrea Wulf

The Death and Life of Great American Cities
Jane Jacobs

Triumph of the City
Edward Glaeser

Signing Their Lives Away
Joseph D’Agnese and Denise Kiernan

The Age of Wonder
Richard Holmes

The War Before the War
Andrew Delbanco

The Mercury 13
Martha Ackmann
Back to Top