The Cavalier in the Yellow Doublet Reader’s Guide 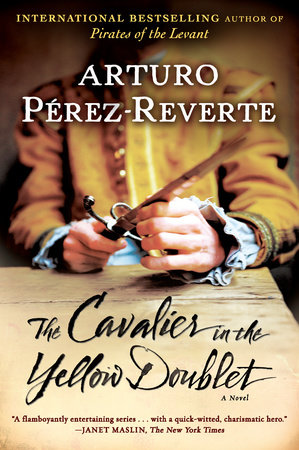 The Cavalier in the Yellow Doublet Reader’s Guide

print
The Cavalier in the Yellow Doublet Reader’s Guide

In 17th–century Madrid, Captain Diego Alatriste and his apprentice, Íñigo Balboa, are attempting to enjoy the tenuous peacetime Spain has gained after the Hundred Years War. They occupy themselves with literature and theatre, spending time with their old friend and celebrated poet Francisco de Quevedo. Instead of exchanging gunfire with the French, they exchange witty repartee about the latest plays and the authors who wrote them. The most popular dramas of the day, however, reflect the lives its citizens, and all of their romance, scandals and violence, and so it isn’t long before the Captain and Íñigo find themselves entangled in another intrigue—this time a plot against King Philip himself.

Their romantic lives have much to do with the mess they find themselves in. The Captain has entered into a dalliance with Madrid’s most famous, and famously beautiful, actress—Maria de Castro, and both her actor husband and several members of the king’s court have reason to object to their love affair. Meanwhile, Íñigo finds himself led right into harm’s way by the angelic–looking and dangerously seductive Angelica de Alquézar, the niece of Captain Alatriste’s powerful enemy, Luis de Alquézar, and a member of the queen’s court. Soon, Alatriste and his loyal apprentice are in more danger of losing their liberty, and even their lives, on their home soil than they ever were in foreign lands during times of war.

The latest in the Arturo Pérez–Reverte’s series of novels about the adventures of Captain Alatriste, The Cavalier in the Yellow Doublet continues the tale of this captivating swashbuckler.

Filled with suspense and action, as well as minute historical detail, The Cavalier in the Yellow Doublet depicts 17th–century Spain and all of the corruption, deception and betrayal that ran through its royal court at the height of its wealth and opulence.

Arturo Pérez–Reverte lives near Madrid. Originally a war correspondent, he now writes fiction full–time. His novels include The Flanders Panel, The Club Dumas, The Fencing Master, The Seville Communion, The Nautical Chart, and The Queen of the South. In 2002, he was elected to the Spanish Royal Academy.

Learn More About The Cavalier in the Yellow Doublet
print

Pirates of the Levant

May There Be a Road

The Black Obelisk
Back to Top