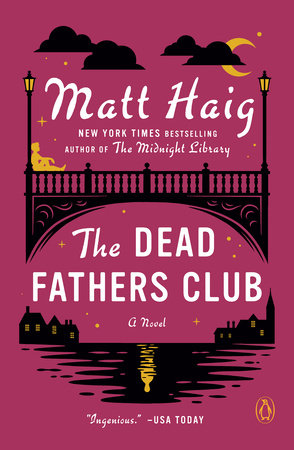 INTRODUCTION
The plot may strike one as oddly familiar. Following the premature death of his beloved father, a young man is visited by the father’s ghost. The spirit urges the youth to take vengeance upon a morally ambiguous uncle, who may have had a hand in the father’s death and who now has romantic designs on the dead man’s widow. Torn between loyalty to his father and his moral obligations to the living, the young man is plagued by indecision. Although he yearns to bring peace to his father’s soul by killing the apparent murderer, he hesitates, wondering what kind of peace can truly be won by giving the wheel of violence another turn.

Recognizable as it all seems, the scene of Matt Haig’s ingenious novel The Dead Fathers Club is not Denmark, but the working-class English town of Newark-on-Trent. The only castle in sight is not Elsinore, but the Castle and Falcon pub, owned and operated by Brian Noble until the suspicious car accident that claimed his life. Furthermore, Haig’s Hamlet figure is a far cry from the brooding, intellectual scholar who returns from Wittenberg to find his life in tatters. He is, instead, eleven-year-old Philip Noble, an isolated, introspective boy who wrestles with his dead father’s stark, insistent command: He must kill his seemingly kindly Uncle Alan, who, as an experienced garage mechanic, possessed both the knowledge and the opportunity to tamper with his late brother’s car. As Philip looks on, motive is soon added to means and opportunity: Not only does Alan swiftly step in to take charge of Brian’s pub, but he also promptly proposes marriage to Philip’s mother. As Philip contends with powerful emotions of grief, anger, and jealousy, he must also confront a battery of almost unanswerable questions. Is his father’s ghost telling him the truth, or is he duping his son into committing a series of unconscionable crimes? Is Uncle Alan sincere in his apparent indulgence and generosity toward Philip, or is he, as the ghost insists, secretly plotting to kill both Philip and his mother? And, as another writer once put it, is it nobler in the mind to suffer the slings and arrows of outrageous fortune, or to take arms against a sea of troubles and, by opposing, end them?

Enlivening this remarkable novel from start to finish is the narrative voice of Philip himself. Lonely, misunderstood, but thoughtful beyond his years, Philip struggles to express his complex fears of both life and death in the journal that his school counselor encourages him to keep. As Matt Haig leads us to question the motives of Philip’s family and friends, as well as the true nature of Philip’s father’s ghost, he gradually evolves a brilliant contradictory portrait of his central character. Is he precociously philosophical or pathetically mad? Is he a foolish boy, or a fount of strange forbidden wisdom? Must he follow Hamlet’s destiny to the bitter end, or will he summon the courage to regain control of his fate? Not until the shattering conclusion do the deep mysteries of the story become clear.

Matt Haig’s writing has appeared in The Guardian, The Sunday Times, The Independent, and The Sydney Morning Herald. The Dead Fathers Club is his American debut. He lives in Leeds, England.

A CONVERSATION WITH MATT HAIG

In The Dead Fathers Club, you have chosen to reimagine not merely a classic but arguably the classic work of English literature. Where does one get the daring to wrestle with a giant, and how did you go about making Shakespeare’s story into your own?

Well, I didn’t begin with a conscious desire to rewrite Hamlet. I began with the desire to tell a story about grief from a child’s perspective and I found myself gravitating increasingly toward these grand Shakespearean themes. And yes, it’s a massive risk, and I’m not the one to judge if I’ve pulled it off. But I think all writers feel the ghosts of literature breathing down their neck, so I figured it might as well be Shakespeare looking over my shoulder as anyone else.

In your opinion, how important is it to your readers’ enjoyment that they have read or reread Hamlet recently?

My intention was to write a story that connects with people emotionally and hopefully that connection works the same with or without an in-depth knowledge of Hamlet. After all, Shakespeare himself was the king of rewrites, and Hamlet itself echoes earlier vengeance stories.

One of the greatest challenges a writer faces is sustaining a narrative voice that differs from his or her own natural mode of expression. How were you able to think your way so successfully into the mind and diction of an eleven-year-old boy?

F. Scott Fitzgerald said when he wrote he felt like he was holding his breath and swimming under water. With The Dead Fathers Club it was certainly written at quite a breathless, intense level, and came from a place I can’t easily locate. But once I had the voice, it was there and I was able to see everything through Philip’s eyes.

You do a fine job of evoking Philip’s preadolescent alienation, both from his family and his peers. What enabled you to write so sensitively about Philip’s feelings of inferiority and exclusion?

I guess I too was a bit of a loner at that age, and found it difficult fitting in at a large new school. I ended up remembering a lot of painful stuff about my own childhood—the school side of it, rather than the family side of it, as my home life was generally happy. I think as a writer it’s actually an advantage to have that feeling of being outside things, because it sharpens your perspective. At the same time, it’s very painful as a child to feel like that because all you want is to be accepted. As an adult it’s almost a badge of honor to be a bit of an outsider. But to get back to your question, a lot of my experience was thrown in there. For instance, some of the scenes with bullies brought back my own memories and the scene where Philip sleepwalks on a school trip—that was me.

In the prose style of your novel, as well as in its concern for the inner reflections of a troubled youth, some readers may catch echoes of Burgess and Sillitoe. Apart, obviously, from Shakespeare, whom do you look upon as the major literary influences on this book?

In terms of style, I’d say Joyce and all those other experimenters gave me the freedom to play fast and loose with punctuation, using it as and how I wanted rather than as the rules of English grammar dictate. I think Updike said that for a novel to be truly original it has to create its own language, and I definitely tried to make Philip’s voice as unique as I could. Novels like A Clockwork Orange and even The God of Small Things influenced my approach to creating the right language, aiming to give words the freedom and flexibility of thought. But generally my literary heroes are those who understood intelligent fiction can also be entertaining and gripping. Anyone from Dickens to Twain to Graham Greene. I think writers can experiment and entertain, embracing all those crazy things like plot and character that used to bring Virginia Woolf out in a rash.

In the chapter titled “Slaves,” Philip observes that true freedom is unattainable. He suggests that, so long as human beings remain in their bodies, they are subject to constraints that at times become almost intolerable. Do you have additional thoughts on the problem of human freedom, in your novel or elsewhere?

I think freedom is a tricky concept for human beings. Wars are now fought in its name, but we still don’t really get a handle on what true freedom means. It’s consciousness that makes it such a problem. I don’t think cats go around worrying about feline freedom in quite the same way. Because we are aware of this “mortal coil” we spend our lives seeking answers—in religion, in fiction, in each other. Human freedom, I suppose, is only possible in the imagination, which is why we need stories and cats don’t.

A crisis in your story comes when Philip’s girlfriend is in mortal danger and he has to break out of the Hamlet story line in order to save her. In that moment, he reasons that life is not like a TV with only one channel and that we have power to “change the story.” Why did you decide to have Philip “change the story,” and is there anything further you would like to say about Philip’s revelation?

This is the moment of empowerment for Philip, who until this point has felt like everything is out of his control. This, if anything, is the message I wanted to get across: To do the right thing we sometimes have to take the unexpected path. It goes back to my belief in instinct rather than premeditated thought being a better way to go about things, whether writing a novel or living a life that’s true to itself.

Even though, as the author, you possess the ultimate power to “change the story,” you have chosen to give your novel an ending that many readers may not feel is an optimistic one. How did you come to this particular ending for the book?

In theory, yes, the author has that ultimate power but with this novel the ending was the only one that fitted, and it dictated itself. It is bleak in some ways, but there is optimism there too. I hope.

Another novel that again looks like it’s heading into some dark territory. It’s about a man who, following the death of his wife and son, goes to obsessive lengths to keep his daughter safe. I’ve also got a children’s novel coming out soon, called Samuel Blink and the Forbidden Forest. Even that manages to contain its fair share of tragedy amid the lighter stuff. I try not to write stories that are either consistently dark or light, as life contains its share of both. Comedy is how we cope with tragedy, so I don’t see how you can exclude one from the other. Life is the biggest black comedy there is.

We Ride Upon Sticks
Quan Barry

Fields Where They Lay
Timothy Hallinan

The Light of Day
Graham Swift

How to Be Good
Nick Hornby

The Hippopotamus
Stephen Fry
Back to Top