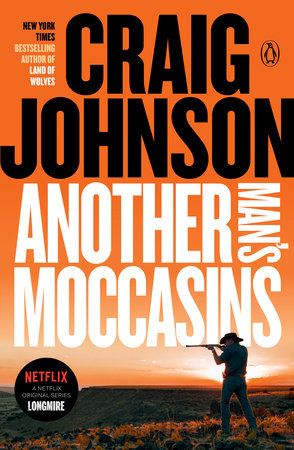 “No matter what aspect of law enforcement with which you might be involved, there’s always one job you dread,” Walt Longmire says near the beginning of Another Man’s Moccasins. “For the Western sheriff it’s always been the body dump. . . . There you stand by some numbered roadway with a victim, no ID, no crime scene, no suspects, nothing.” In this case, it is, incongruously enough: a young Vietnamese woman found murdered along a highway in Absaroka County, Wyoming. And Walt is baffled.

No suspects present themselves at first, but soon enough, Walt is assailed by one. Poking through the brush, he is attacked by what at first appears to be a wild animal but turns out to be something slightly more ferocious—Virgil White Buffalo—a seven-foot tall Crow Indian living in a culvert who appears to be in possession of the dead woman’s purse. Despite the evidence and proximity to the crime scene, however, Virgil seems an unlikely suspect. To make matters more complicated, Walt discovers a hauntingly familiar photo in the victim’s purse. It shows a woman who looks very much like someone he knew when he was serving in Vietnam. It also shows a man who resembles, and indeed is, a young Walt Longmire. This photo, coupled with the fact that the victim is Vietnamese, that Virgil White Buffalo is a Vietnam vet, and that a Vietnamese man, Tran Van Tuyen, shows up in a local bar, sets in motion a series of reveries in which Walt recalls his first murder case, when he was a Marine investigator in Vietnam. The novel moves deftly back and forth between these parallel timeframes, as the past intrudes upon the present and the cases overlap in uncanny, and uncomfortable, ways.

Like all of Craig Johnson’s novels, Another Man’s Moccasins investigates not just a particular murder, or murders, but the large social issues that give rise to such crimes. In this case, it is primarily prostitution and human trafficking that set the wheels in motion. But on an ever deeper level the novel explores the tensions between the worst and best aspects of human nature. Though the novel does not lend itself to easy moralizing, it clearly juxtaposes two value systems—one based on greed and selfishness, and the other on loyalty and a deep sense of justice. Walt’s own morality is built upon loyalty not only to the living but to the dead, and on his desire to be fair to everyone he encounters—even those who, like Virgil White Buffalo, have tried to harm him. Over the course of the novel, however, Walt is forced to ask himself whether or not he is in fact guilty of racial prejudice. That inner investigation provides a compelling counterpart to the outer search for the killer who is at work in Absaroka County. And with consummate skill, and a relentless nose for the truth, Walt finds the answers to both.

Q. In an earlier interview you said injustice is the “burr under your saddle” that motivates you to write. What injustice prompted you to write Another Man’s Moccasins?

About 14,000 people, usually women and children, are trafficked into the United States for use in an industry that is third only to arms dealing and drugs as one of the most profitable global commodities. Prostitution is a multi-billion-dollar industry in which women and children, desperate for a better life, are abducted and routinely raped, beaten, and sometimes killed. Their stories are so horrific that I didn’t have to fictionalize them. I just needed to change the names to protect the innocent, as it were.

Q. Why did you choose to make the parallel story of Walt’s investigation in Vietnam so prominent in this book?

Déjà vu all over again. It seems as though a lot of the problems that confronted us in Vietnam continue to face us today, so that is surely a reason to have Vietnam play such an important role. And I figured those years were formative for Walt and explain a lot of the choices that he made, and still makes. I wanted to carry the immediacy of those scenes within the novel, so I thought that if I could think of another crime that took place in the present that was connected to the one that Walt had solved in Vietnam in 1968, I’d be able to push that immediacy. The problem was to do that without it seeming contrived.

Q. During the course of the novel, Walt references Shakespeare, Dante, Virgil, Tennessee Williams, and Harper Lee. He is also a fine pianist and serviceable chess player. Why is it important that Walt have this level of cultural sophistication? Is he a better detective because of it?

I think what you’re referring to are symptoms of an active mind. Unlike us, Walt doesn’t like mysteries, and that’s why he’s so good at his job. Another factor is that the books are written in the first person. Would you want to spend three hundred pages in the head of a dullard? Walt may also have just a touch of the Renaissance in him, which reflects my belief that modern mystery readers expect a great deal more than what has been presented historically. They anticipate social conscience, full character development, history, and humor, just to name a few. These things would be difficult to convey in a character unaware of the world around them.

Q. Your vision of the West, and of human nature, is quite different from that of a writer like Cormac McCarthy. Do you see yourself ultimately as an optimist or an idealist?

An idealist possibly, but an optimist, definitely. I guess I subscribe to what Abraham Lincoln used to refer to as “the better angels of our nature.” After what I’ve seen, I feel compelled to have a strong belief in human beings, and that the survival of our species might be indebted to the fact that we are at our best when things are at their worst.

Q. Would you say that your novels present an ideal of community and of the values necessary for a healthy community? Do you think this ideal is achievable in the real world?

I’m not sure if young women are left dead along the roadsides in what I would consider an ideal community, but I see what you’re getting at. My beliefs are pretty simple along those lines: If we all look out for each other, we won’t have to look out for ourselves. And yes, I do think it’s achievable. There is chaos in the universe, and so many of our human conventions are designed to hold that in check, to provide order where there is none. I don’t write to display that anarchical given, but I concern myself with the ways we defend ourselves against it with love, hope, and law. The negative aspects of our natures are easy enough to highlight, but the positive ones are more ephemeral and, inevitably, more enlightening.

Q. Virgil White Buffalo is a very compelling character in the novel, even though he utters only a few brief sentences. What drew you to make him part of the story?

My ranch is near the Northern Cheyenne and Crow reservations, and I’ve said before that Western writers who choose to leave the Indians out of their work are doing themselves a great injustice. There are so many wonderful things to say about the Crow, about their intelligence, humor, and spirituality; but another thing you can say is that a few of them really took to carbohydrates. Suffice to say that when it came time to build my barn and I couldn’t afford a tractor, I went and got my friend, Daryl Pretty-On-Top.

With Virgil, I was looking at Walt and Henry’s Vietnam experiences through a glass darkly—looking to see what they would’ve become without all the safety nets. Then the question became, how could this character survive, and what would society do with him?

Q. Has your relationship to the characters in the Walt Longmire mysteries changed over the course of four books? Has your writing process changed in any way?

I think that one of the joys in writing or reading a series is the ability to get to know the characters over a longer arc than a single book can provide. The lifeblood of any series is the complexity of the characters, and I think you have to allow them to change and grow. Walt, Vic, and Henry have all changed over the course of four novels, and that allows them to surprise me, which in turn, might allow me to surprise the reader.

As to the process, I don’t think it has changed particularly. I get up in the morning, make coffee, and start writing. To be a writer you have to write, and if you challenge yourself enough, you might even become a better one. I refer to it as the ditch-digging school of literature, and I’ve never heard of a ditchdigger who got a shovel in his hands and just didn’t feel the ditchthat day.

The Godwulf Manuscript
Robert B. Parker

Trouble in Paradise
Robert B. Parker

Night Passage
Robert B. Parker
Back to Top