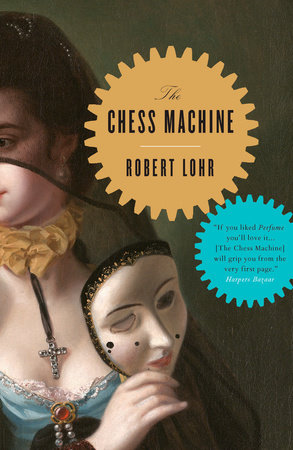 Vienna, 1770: The Enlightenment is in full swing and scientific and technological wonders are beginning to capture the public imagination. But, in many ways, it is still a credulous age immersed in superstition and hungry for the miracles that religion once supplied. Into such a world steps Baron Wolfgang von Kempelen, a minor member of the Habsburg court with major ambitions to impress the empress and earn himself lasting fame and fortune. When a writing machine is unveiled to much applause and amazement, Kempelen promises to produce an invention that will make all the current technology look like wind-up toys. Thus Kempelen begins work on the amazing chess machine, a thinking automaton, the mechanical Turk.

Kempelen has, of course, promised more than he can realistically hope to deliver. But his desire for fame impels him to create if not a real chess-playing machine then the illusion of one. When he hears of a brilliant imprisoned chess-playing dwarf, Tibor Scardanelli, Kempelen recruits Tibor to secretly operate his machine from the inside. Their Faustian bargain: Tibor gets out of one jail and into another, compromising his Catholic faith (“Thou shalt not bear false witness”) and helping Kempelen to deceive the crowds who throng to watch the mechanical Turk (the machine is painted by Kempelen’s caustic Jewish assistant to look like a “Mussulman”) vanquish all comers.

All goes according to plan, with the Turk easily dispatching opponents and performing impressively in front of the empress, defeating Friedrich Knaus, the Court Mechanician, whom Kempelen hopes to displace. But then the jilted Baroness Iboyla threatens to expose the illusion. After a drunken exploration of the Turk’s amorous powers, she is killed when Tibor accidentally strikes her. Kempelen makes it look like a suicide, but the baroness’s brother, Baron Andrássy, suspects foul play and challenges Kempelen to a duel, forcing the inventor to walk a high wire between illusion and reality, fame and disgrace, life and death, for the remainder of the novel.

Based on a bizarre true story, The Chess Machine is an extended meditation of the early stages of modernity, as religious faith begins to give way to scientific progress and a more materialistic worldview. Seen in this light, Kempelen becomes a kind of huckster Prometheus, offering technological wonders that seem to appropriate godly powers. Tibor, on the other hand, is devout and objects to the Turk’s deceptions on precisely religious grounds—that it is an offense against God and a breaking of the commandment forbidding bearing false witness. He alone of all the major characters has a strong conscience and feels a terrible remorse for Baroness Ibolya’s death. That such a figure should become the human engine of the farcical automaton is one of the novel’s richer ironies.

The Chess Machine may also be read as an innovative exploration of the age-old tenet that things are not always what they seem. The novel spins a fascinating web of deceptions as virtually all the major characters engage is some form of dishonesty or betrayal. Indeed, the relationship between truth and illusion is central to the novel—not only as it is embodied in the Turk, but also in the duplicitous interactions between the characters, all of whom either support the illusion or are compelled to expose it.

Robert Löhr was born in Berlin, and grew up there and in Bremen and Santa Barbara, California. After school, he trained as a journalist and worked for several newspapers. He went on to become a screenwriter at the German Film and Television Academy. He writes for movies and television as well as for the theater, and works part time as an actor, director, and puppeteer. The Chess Machine is his first novel.

A CONVERSATION WITH ROBERT LÖHR

Ride With Me
Thomas B. Costain

When Christ and His Saints Slept
Sharon Kay Penman

When All the World Was Young
Ferrol Sams

When We Lost Our Heads
Heather O’Neill

Watch for Me on the Mountain
Forrest Carter
Back to Top