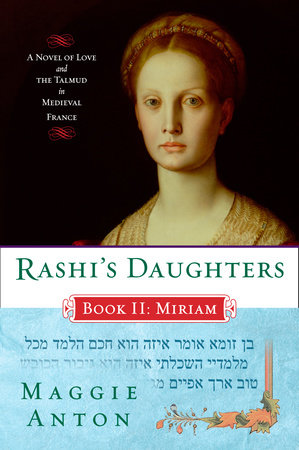 INTRODUCTION
In the latter half of the eleventh century, the renowned scholar Salomon ben Isaac (or Rashi) breaks with tradition by teaching each of his three daughters, Joheved, Miriam, and Rachel, the intricacies of the Talmud. When Miriam loses her betrothed and childhood study partner, Benjamin, she feels as if her life has come to an end. And yet familial and societal pressures demand that she move past his death and choose a husband. So when handsome Judah ben Natan appears in the French city of Troyes, seeking a wife who is both modest and a scholar, it appears as if fate, or Le Bon Dieu, has only good fortune in store for the apprentice midwife.

But while Judah is a devoted Talmud scholar and quickly becomes a valued member of Salomon’s yeshiva, he wrestles daily with desires that conflict with his religion and the vocation he adores. Meanwhile, Miriam faces censure from her community as she becomes the first woman in Troyes, and one of the first in Europe, to perform brit milah—ritual circumcisions.

Rashi’s Daughters, Book II: Miriam picks up where its acclaimed predecessor, Rashi’s Daughters, Book I: Joheved, left off. InBook II, Maggie Anton continues to follow this fascinating trio of sisters as they defy the expectations and opinions that confine them, all while studying and revering their heritage through their devotion to the Talmud. This second installment of the Rashi’s Daughters series raises intriguing questions about women, sexuality, and tradition, while presenting a vivid picture of medieval France, and giving us insight into the timeless nature of loss, and of love.

ABOUT MAGGIE ANTON
Maggie Anton was born Margaret Antonofsky in Los Angeles, California. Raised in a secular, socialist household, she reached adulthood with little knowledge of her Jewish religion. All that changed when David Parkhurst, who was to become her husband, entered her life, and they both discovered Judaism as adults. In the early 1990’s, Anton began studying Talmud in a class for women taught by Rachel Adler, now a professor at Hebrew Union College in Los Angeles. She became intrigued with the idea that Rashi, one of the greatest Jewish scholars ever, had no sons, only three daughters. Slowly but surely, she began to research the family and the time in which they lived. Legend has it that Rashi’s daughters were learned in a time when women were traditionally forbidden to study the sacred texts. These forgotten women seemed ripe for rediscovery, and the idea of a book about them was born.
A CONVERSATION WITH MAGGIE ANTON
Q. How did you gain your expertise on medieval Jewish life and, in particular, the lives of women during that period?

A. I started my research three years before beginning to write. However, I have been constantly doing more research and incorporating what I’ve learned into what I’m writing. I actually changed the ending of Book I: Joheved the month before it went to the printer because I learned something new about medieval brit milah.

A. I first visualized what came to be the opening scene, with Joheved in bed with the cat, and also the scenes where Leah accuses the servant of stealing and where Rashi’s family learns to make parchment. For Miriam, I first visualized the night where she seduces Judah and he thinks she’s a demon. I had never written anything before Book I: Joheved, so I had a huge learning curve and it took me ten drafts. Book II was easier; I knew much more about plot and character development.

Q. What is it like working on Book III: Rachel (which is due out in bookstores in 2009), knowing that this is the last of Rashi’s three unusual daughters, and therefore the end of the trilogy? How hard will it be to leave this particular cast of characters and their extraordinary narrative?

A. Actually, I’m still learning lots of interesting things about medieval Jews as I research Rachel’s story, perhaps more than I can use. So depending on how successful the trilogy is, I may decide to write Rashi’s Granddaughters. In any case, I expect to keep studying Talmud for many more years, so Rashi and his family will continue to speak to me.ence of Ruth Stone’s poem “Romance” that I found inspiring the summer I read it over and over. And of course Virginia Woolf and Jane Austen.

Q. What other subjects are you interested in writing about? Do you have any other historical figures or time periods, and any other projects, in mind?

A. When I first decided to write Rashi’s Daughters, I had in mind another possibility, a historical novel about a woman mentioned many times in the Talmud, Rav Chisda’s daughter, who was married, in turn, to scholars who headed the two great Talmud academies in Babylon. I think the time period (500 CE) when the Talmud was redacted is also a fascinating one that few people know about. So I still want to tell her story.