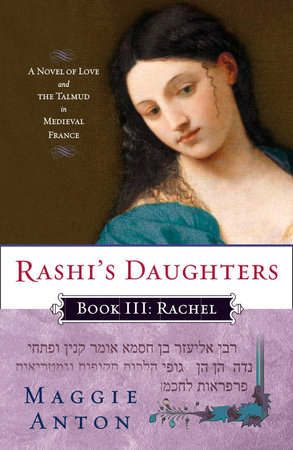 INTRODUCTION
Rabbi Salomon ben Isaac’s three daughters are all married, adult women now, with babies to raise and businesses to run, in addition to helping their father with his vineyard and yeshiva. This is particularly true for Rashi’s youngest daughter, Rachel, who has long been his favorite and, as such, is used to getting her way. The world around her, however, is changing quickly, and Rachel soon meets with more adversity and challenges than she would have ever thought possible.

Her husband, Eliezer, must travel to Sephardic Spain in order to conduct his family’s business, and while there he becomes engrossed in the secular study of astronomy. Rachel, determined to bring him home to Troyes and back to study of the Talmud, takes it upon herself to start up a woolens business that would make enough money to support her family and keep her husband home. The venture is fraught with obstacles, however, and begins to test more than just Rachel’s wit and business acumen. It threatens to undo her marriage altogether.

In addition to the turmoil in her personal life, the whole of Europe is being taken up in a wave of new Christian fervor, as the pope calls upon rich and poor alike to fight in the First Crusade. This revival of spiritualism ends up doing more harm than good, however, as the poorly organized Christian masses wallow in poverty and chaos, while watching their Jewish neighbors prosper. Anti-Semitic rancor reaches a fever pitch when Jewish communities in the Rhineland fall under brutal attack and their great yeshivot are destroyed. In France, Rachel must strive with her family to keep peace with their Notzrimneighbors, while continuing to record her father’s commentaries, or kuntres, before his health fails completely and his great wisdom is lost forever.

Rashi’s Daughters: Book III: Rachel by Maggie Anton is the third installment of her trilogy about the fiercely talented progeny of “Rashi”, a widely revered Jewish scholar of the 11th century. Rachel picks up where Miriam left off, revealing the last years of Rabbi Salomon ben Isaac’s life and the fate of his famous school and large, gifted family. Just like the first two novels, the story of Rachel combines historic fact and Talmudic wisdom with romance and drama, and the result is a breathtaking, page-turning story that reveals Rachel to be, like her sisters, a woman extraordinary and ahead of her time.

A CONVERSATION WITH MAGGIE ANTON
Q. You’ve gained quite a loyal following with your depiction of Rashi’s daughters. What is your favorite part, or what is the most rewarding part, of having inspired such devotion to your books, and to the story of these young women in particular?

The most rewarding part of having such a loyal following is when one of my readers becomes inspired to study Torah or Talmud because of my work.

Q. How much of your Torah study has influenced the direction of the novels? How much of your personal experience studying Torah were you able to draw upon when writing about Joheved’s, Miriam’s, and Rachel’s experiences? What was the most important aspect of Torah study that you wished to convey to your audience?

All the Talmud passages that Rashi’s daughters study are ones I have wrestled with myself, and I strove to make those scenes as exciting and interesting as Talmud study is for me. I hope to convey to my readers that Torah and Talmud study can be fun and fascinating, and that these texts are not merely boring, lengthy, and detailed debates that have nothing to do with a modern woman’s life.

Q. Did your own secular research for the novels ever create conflicts with your Torah study, as it did for Eliezer inRachel?

No. I was a scientist first, and then a Talmud student. I gave up chemistry for Torah study.

Q. In the acknowledgements for this book, you mention that you have no plans to write Rashi’s Granddaughters. Why? Have you discovered a new Jewish heroine to write about? What book or books can we expect to see from you in the near future?

For me, writing a book is hard work, an excuse for doing the research, which is what I truly enjoy. At this time I feel that I have mined the lives of medieval French Jews as much as I can and so I have begun researching a new historical setting. I do have a new Jewish heroine in mind, a nameless (for now) woman who lives around 300 C.E. in Babylonia, during the time when Persia defeats Rome to become the wealthiest, most powerful empire in the world, when Constantine makes Christianity the official religion of Rome, and when the Babylonian Talmud is being composed. This time period, crucial to Jewish history, yet one that very few people today are familiar with, will set the scene for my next historical novel.