They Did It with Love Reader’s Guide 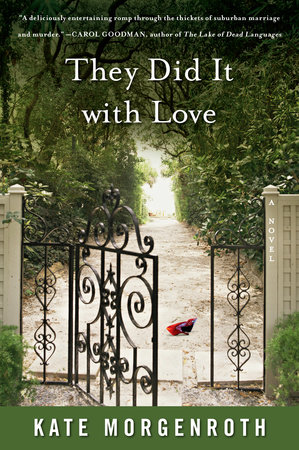 They Did It with Love Reader’s Guide

print
They Did It with Love Reader’s Guide

Sofie and her husband have decided to trade their Manhattan apartment for a house in Greenwich, Connecticut. But the oak-shaded streets are not the tranquil retreat that Sofie expected. When Julia, a member of Sofie’s new neighborhood book club, turns up dead, things get messy. Sofie discovers that everybody has something to hide, including her own husband.

As Sofie wades through a swamp of suburban secrets, it becomes clear that no one’s life is exactly what it seems to be. Priscilla has been married to Gordon for fifteen years, but the love left their marriage a long time ago. Susan is Priscilla’s biggest supporter, until she has to choose between loyalty to her friend and telling the truth. Ashley’s youth and status as a second wife keep her on the outside, but she may know more than the other women think she does. Julia seemed to have it all: the perfect house, job, and husband. But her untimely death leaves everyone questioning how perfect her life really was.

The investigation into the mysterious circumstances surrounding Julia’s death uncovers the lies behind the façade. They Did It with Love is a delightful, twisty, and twisted exploration of the things we’ll do for love.

Kate Morgenroth is the author of Kill Me First and Saved, and two YA novels, Jude and Echo. She lives in New York. Visit her website at www.katemorgenroth.com.

Warning: Questions and discussion topics below may reveal plot points

A CONVERSATION WITH KATE MORGENROTH

Q. Are you an Agatha Christie fan? And if so, which is your favorite Christie novel?

A. I love Agatha Christie, but I have never been able to figure out the mystery in her books before the reveal. Can anyone? Even my mother (who I consider a master mystery reader) can’t figure them out. But that doesn’t affect my enjoyment of the books. I think I like them as much for Christie’s little comments about human nature as I do for the mystery element. And as for a favorite, I share Sofie’s preference for anything/everything Miss Marple.

Q. You also write YA novels. Do you approach an adult novel differently when you are writing it than a novel for young adults? Or is the process of creating the characters and story the same for you?

A. The only difference for me in writing a young adult novel is the age of the protagonist. My favorite books are the ones where the feelings underneath are universal—the books where it doesn’t matter whether the main character is eighteen or eighty. So that’s what I shoot for in writing. However, though the process of writing YA isn’t any different, I did approach writing a novel with a mystery differently. (See the next question . . . )

Q. Did you plot out the novel before you began it, or were you surprised by who did it?

A. Sometimes when writing, the story takes you places where you don’t expect, so I’m not a fan of intricate outlines. I like to leave room in my books to be surprised while I’m writing. But I did a lot more structure work with this book because of the mystery element. I think with a mystery the goal is that the reveal isn’t obvious beforehand, but when you do know the ending, you can look back and it all makes sense. In order to layer in that retroactive feeling of it all making sense, I had to know who did it. That’s not true for all mysteries though. I read that Scott Turow, in writing Presumed Innocent, didn’t know if his protagonist was the murderer or not. And I think that worked brilliantly there because there is this constant swinging back and forth in when you’re reading that novel, yes he did, no he didn’t, yes he did, no he didn’t . . . you get the idea.

Q. Was the setting of the book always Greenwich, or did that come to you along the way? Why did you pick Greenwich?

A. At first when I wrote the book I made it a fictional town in Connecticut—but in my mind I was thinking of Greenwich. Then at a certain point I decided why not just make it Greenwich? Well, actually, I do know why I didn’t make it Greenwich at first. It is so hard—almost impossible—to portray the complexity of reality in fiction. When you use anything from “real life” in fiction, you’re not going to capture the whole truth of it. Rather you use pieces that serve the story. So, in my mind, my Greenwich is a fictionalized version. There are elements of truth, but it’s not the whole truth.

Q. There’s an element of competition and gossip to the closed community portrayed in this novel. It’s one that is often attributed to gated suburban or wealthy suburban communities. What creates this environment, do you think, and is it possible in cities as well as the suburbs? Are there more secrets in the suburbs than in cities, and are they just ignored more often in city environments?

Q. Are you in a book club? If yes, what have been some of your favorite books that you’ve read with your group? Do you have “rules” like Priscilla does about who can join and what you read?

A. I have been in many book clubs in the past. I am in only one at the moment, but I like doing as many book clubs as I can possibly fit into my schedule. I love having an excuse to read so I can say to myself, “Nope, I can’t pay those bills, do the laundry, defrost the arctic icecap that is my freezer tonight because I have to read this book for tomorrow’s meeting.” One of the best book clubs I was in had a rule where everyone had to prepare a little presentation on the book, and though it sounds like a fifth grade book report, and it always seemed a bit of a pain in the neck to do beforehand, when it came time for the book group to get together it always made the meeting better because it was fun to see the different ideas that people came up with, and it kept us focused on the book.

Q. Who and what are your favorite authors and books, and what draws you to them?

A. I have an eclectic group of favorite authors. It’s curious, but none of my very top picks are contemporary. My top three are Anthony Trollope, Jane Austen, and Selma Lagerlof (not well known, but she was the first woman to win a Nobel Prize for literature). I love that sense of reading someone who was writing a hundred or two hundred years ago, but feeling like the authors are describing people I know. I love that sense that the traits of human nature are timeless.

Learn More About They Did It with Love
print

All the Secret Places
Anna Carlisle

The Case of the Invisible Dog
Diane Stingley

Through the Heart
Kate Morgenroth

The Uses of Enchantment
Heidi Julavits

The Problem with Murmur Lee
Connie May Fowler

End of the Pier
Martha Grimes

Play to the End
Robert Goddard

Blood of the Wicked
Leighton Gage

The Other Son
Alexander Soderberg

The Beggar’s Opera
Peggy Blair
Back to Top