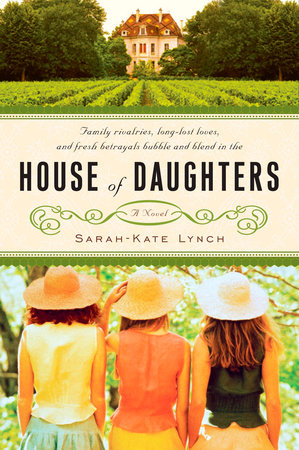 NOTE: We recognize that reading is a personal experience, and we hope that the author interview and questions below will provide a springboard to provoke a lively discussion.

INTRODUCTION
Lonely Clementine is the rightful heir to the House of Peine, the vineyard that has been in the family for generations. She has spent her whole life caring for the vines, not to mention her sour brute of a father. But now the Peine patriarch is dead, and to Clementine’s distress his will stipulates that she must share the vineyard with a half-sister she hasn’t seen in twenty years and another she didn’t even know existed. Secrets tumble out as the three sisters struggle to rescue the family heritage while overcoming their own differences. As a precious blend of grapes, tears, and triumph brings these estranged siblings together, readers will savor this heartfelt toast to sisterhood and inspired celebration of champagne.
ABOUT SARAH-KATE LYNCH

A tireless researcher, Sarah-Kate Lynch trailed the byways of Ireland sampling dairy products for her first novel, Blessed Are the Cheesemakers, and perfected French sourdough bread for her second, By Bread Alone. In the interests of maintaining her artistic integrity regarding House of Daughters, she considers it her duty to drink as much champagne as she can possibly manage.

A CONVERSATION WITH SARAH-KATE LYNCH

What inspired you to write House of Daughters?

I decided one year, due to being old and getting terrible hangovers from drinking still white wine, that I would only drink champagne for a year because it was too expensive to ever afford much of, thereby only ever theoretically coming in small amounts. This proved to be a slightly flawed idea, as it turns out, because I simply set my research skills to finding how to get it cheaper. During this process, I discovered what it was that made champagne pricey in the first place: it all comes from a very small part of France and is made to a very strict recipe handed down from one generation to the next. Well, that was very much up my alley, and when I found out that champagne is made from three different grapes all blended together in different amounts each year to get the exact same taste, the story of three different sisters having to work together for the good of something bigger than themselves started to fall into place. I have two sisters and we get along very well, I couldn’t imagine not having them, or falling out with them. We’re like grapes, we come in a bunch.

How did you go about doing research for House of Daughters?

I went straight to Champagne! I’ve been a food writer in the past so had contacts that got me in the door at Veuve Clicquot, Moet and Chandon, and Krug. Lunch with Remi Krug in Reims was a highlight – as was driving with him! Those were the big name champagne brands that have astonishing PR arms but I probably learned more in terms of what I would base the house of Peine on from the Tarlant family near Epernay, where I stayed for a bit, and where they grow their own grapes and where four generations of the family meet once a year to decide on the blend. One of my proudest moments was when the Tarlants wrote to me and asked if they could sell the UK version of the House of Daughters from their winery…and they sent it to customers as a Christmas present.

Both of your previous novels also featured a unique food and place in the world. What kind of food and places are you considering as the subject for your next novel?

Well, I have just completed a global tour of the world’s best tea rooms, if that doesn’t give away too much! Claridge’s in London is my absolute favourite, but I recently had high tea at the Peninsula in Hong Kong which is so splendidly grand that it makes you wish you were alive and taking tea in the 1920s. For a less formal stack of sweets and a decent cuppa, I love Peacock’s which is on the river at Ely, near Cambridge, in England. George Peacock was a lawyer who got fed up with spending all his life in the police station so he turned his daughter’s bedrooms into tea rooms! There’s a beautiful overgrown garden where you sit outside in the summer and it makes you never want to eat a proper meal again ever. Just cakes and scones. Actually, there’s a private joke in House of Daughters: apart from one occasion Clementine eats nothing but bread, pastries or sweets.

The Best of Times
Penny Vincenzi

The Age of Desire
Jennie Fields

All Together Now
Matthew Norman

Eggshells
Caitriona Lally
Back to Top