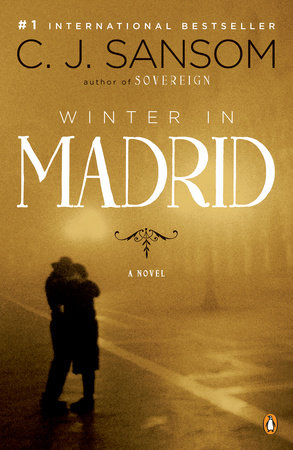 INTRODUCTION
In 1940 Spain, as Franco determines whether to ally himself with Hitler and enter World War II, Madrid lies in ruins, its once majestic streets ravaged by the Spanish Civil War, its people starving and bitterly divided by political conflict. This historical backdrop forms the setting for C. J. Sansom’s Winter in Madrid, an intense thriller and love story that examines the dangers of ideology and loyalty.

As the aching chill of winter falls on the Spanish capital, reluctant spy Harry Brett lands in Madrid, sent by the British Secret Service to win the confidence of his old school chum Sandy Forsyth, a businessman with some very shady investments. Wounded at Dunkirk, Harry is an upper-class Englishman, with an affection for his old school, Rookwood, and an unshakable sense of loyalty and honor. In contrast, his old classmate Sandy is corrupt and dissolute, a jaded risk taker expelled as a teen from Rookwood, who still resents his father’s disapproval. The two are connected by the memories of their school days—as well as by Sandy’s girlfriend, Barbara, a former Red Cross nurse who was once in love with another mutual Rookwood friend, Bernie Piper.

Unlike the principled Harry or disreputable Sandy, Bernie is passionate. His zeal for the Communist cause brought him to Spain in 1937 to fight with the International Brigades against Franco’s fascists. On the bloody battlefields of the Jarama, Bernie disappears, listed missing and believed killed. Left behind heartbroken, Barbara begins a relationship with Sandy, but she never stops hoping that Bernie might still be alive. Eventually, with hefty bribes, Barbara uncovers information about Bernie and develops a plan to help him escape.

Bernie is alive—albeit barely—imprisoned in a brutal labor camp in the harsh Tierra Muerta, or dead land. Injured, malnourished, and physically exhausted, Bernie gains strength from his belief and fervor for the ideals of Communism, strength to keep fighting against the prison guards, the intrusive piety of the Catholic church, and the squabbling of his fellow Communist prisoners.

As another long winter descends on Madrid, seeping cold brings a growing sense of despair. Can Bernie conserve his strength until he is rescued? Will Harry uncover Sandy’s secrets without being unmasked as a spy? And in the chaos and corruption of post–Civil War Spain, can anyone be trusted? Carefully researched, layered with details both harrowing and beautiful, Winter in Madrid is at once an ambitious love story and a candid portrait of a war-torn country caught between false ideology and authority.

C. J. Sansom was a lawyer but now writes full time. He holds a Ph.D. in history and is the author of Dissolution, Dark Fire, and Sovereign in the Matthew Shardlake series. Winter in Madrid was a major bestseller in England and is being published in twelve countries. Sansom lives in Brighton, England.

A CONVERSATION WITH C.J. SANSOM

Q. Why did you decide to write about this period? How did the setting affect the development of the main characters and their stories?

Q. You’ve said that Madrid is your favorite city, and in the book, it almost becomes a character in itself. What first provoked your interest in Madrid? How do you think the city’s tragic past has affected its modern life?

A. I first visited Madrid in the 1970s, just after Franco died. It was winter and it seemed a cold, threatening place then but also with much beauty and full of history. Today it is a busy, relaxed, good-natured city. So much writing about the Spanish Civil War is concentrated on Barcelona and I wanted to redress that balance—the outskirts of Madrid were where Franco’s advance was halted in 1936 and the city was then subjected to a two-year siege. However, for many years after Franco’s death the Civil War was not really discussed; people tended to prefer to forget about it, although over the past fifteen years or so that has changed.

Q. What kind of research went into writing this novel? How did you uncover the tiny details—like cigarette brands, meals, or chicory coffee—that so effortlessly transport the reader to 1940s Spain?

A. By reading as much as I could find about the time, walking the streets of Madrid where the action is located, and seeing what I could find in bookshops and Madrid coin shops. I found a three-volume book of photographs of twentieth-century Madrid that was very useful.

Q. Which character do you identify with the most? Whose story did you enjoy writing the most?

A. I try not to identify too much with my characters and to keep a distance from them. Barbara is the character I most enjoyed writing. It was a challenge because I had never written from the viewpoint of a woman before, but then I have never really believed that men and women are all that different psychologically. She is the one who changes the most because of the things that happened to her that bring out an inner strength that transcends her neuroses. I am sorry when the book is sometimes described as the story of three men, because she is at the center of the book. Sandy was also interesting to write, perhaps because, unlike Barbara, Harry, and Bernie, we see Sandy only from other people’s points of view. I wanted to make him more than just a stage villain and I hope I have succeeded.

A. Winter in Madrid was not really inspired by other books, rather my interest in the period. I think Hemingway would be my favorite. He catches the nuances and complexities of the war.

Q. You’re best known for the Shardlake mystery series, set in sixteenth-century England. Why did you depart from Shardlake to write Winter in Madrid? What was it like writing about an entirely different period of time, and set of characters?

A. I always wanted to write more than just the Tudor mysteries—I didn’t want to be just a one-trick pony. Winter in Madrid was the second book that I wrote and going to a completely different place and time—albeit one where I also knew the historical background—and writing in the third person rather than the first as well as having three narrators was challenging but very enjoyable.

Q. Each of the main characters seems to be questioning some form of authority, whether it is Harry and the British government’s wartime activities, Bernie with communism and Catholic ideology, Sandy and the establishment, or Barbara bucking the accepted path for women at the time. Was this a conscious decision or one that evolved during the course of writing? How does their skepticism reflect the political landscape of the time?

A. I’m not sure that comment is quite right. The only one of the four who is motivated by political commitment is Bernie. Barbara has always been an independent woman in that she chose career over marriage, and there were quite a lot of women like that in the 1930s. For both her and Harry it is seeing what is happening around them that drives them to opposition. Sandy is a rebel but only in the sense that I guess most middle-class crooks are rebels against their upbringing. My idea from the start was that three of the four English characters develop and change, but Sandy doesn’t because somehow he is locked into a path that cannot change.

The Spanish Civil War was, in England and in Europe and I think also in the U.S., the defining issue for political people—either you were for Franco or for the republic. Generally, but not invariably, that was a right-left split. But there were also many nonpolitical people who would not have taken a strong line one way or the other, like Harry.

Q. You dedicate the book “To the memory of the thousands of children of Republican parents who disappeared into the orphanages of Franco’s Spain.” What inspired this dedication?

A. One of the most heart-rending things I learned in my research was how many children of Republican parents who had been arrested or killed in the war became feral and were picked up and deposited in mostly church-run orphanages, where they were taught to hate everything their parents believed in. Some of the orphanages might have been staffed by kindly people but that is certainly not the overall picture one gets. There is a chilling picture in Antony Beevor’s The Struggle for Spain of scared-looking children in an orphanage being made to give the fascist salute, which sums up the whole thing. I think what happens to the two children in the novel was not unusual.

Q. The book includes the historical figures of Sir Samuel Hoare and Alan Hillgarth. How did you decide how to portray them? What was it like depicting real people as fictional characters?

A. Difficult. It is one thing to invent a character and let him develop, quite another to interpret a real person from memoirs, history books, and photographs. It is always going to be your picture of him. I didn’t like either Hoare or Hillgarth much but tried to be fair. A historian of the period whom I met after the book was published took the view—and I think he is right—that in fact Hoare grew more and more opposed to the Franco regime the more he saw of it over the course of the Second World War and by its end was advocating a change of regime.

Q. What are you working on next? Can readers expect any other departures from the Shardlake series?

A. There is another Shardlake, Revelation, coming out in April in England and next year in the U.S. I think it likely that there will be another Second World War novel to come, but my plans are not quite firmed up yet.

Learn More About Winter in Madrid
print
Back to Top