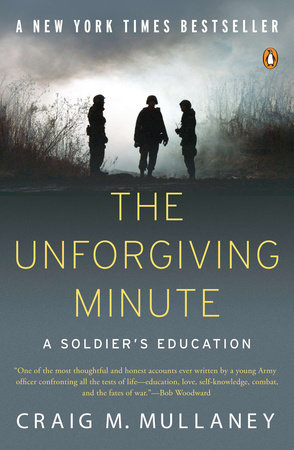 INTRODUCTION
One haunting afternoon on Losano Ridge in Afghanistan, Captain Craig Mullaney and his platoon were caught in a deadly firefight with al-Qaeda fighters when a message came over the radio: one of his soldiers had been killed in action. Mullaney’s education had been relentlessly preparing him for this moment. But when it came, it was more affecting than Mullaney could ever know. Afterward, the hardest questions remained. When the call came to lead his platoon into battle and earn his soldiers’ salutes, was he as ready as he had hoped to be? Had his education been sufficient for the unforgiving minutes he faced?

A fascinating account of an Army captain’s unusual path through some of the most legendary seats of learning straight into a brutal fight with al-Qaeda in Afghanistan, The Unforgiving Minute is, above all, an unforgettable portrait of a young soldier grappling with the weight of his hard-earned knowledge while coming to grips with becoming a man.

After leaving the military in 2008, Craig served as a national security adviser on Barack Obama’s presidential campaign and was the Chief of Staff for the President-elect’s Department of Defense Review Team. Craig is currently serving in the Department of Defense as the Principal Director for Afghanistan, Pakistan, and Central Asia. He lives in Washington, D.C., with his wife Meena.

All In
Paula Broadwell and Vernon Loeb

Shadow of the Sword
John Bruning and Jeremiah Workman

A Rope and a Prayer
David Rohde and Kristen Mulvihill