Beside a Burning Sea Reader’s Guide 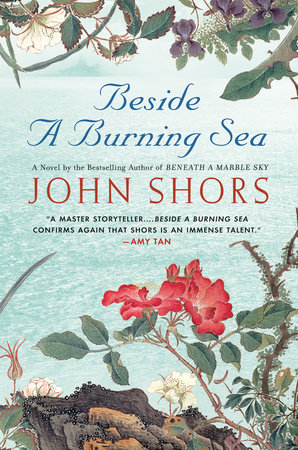 Beside a Burning Sea Reader’s Guide

A LETTER FROM JOHN SHORS

When my first novel, Beneath a Marble Sky, was published as a paperback in 2006, I decided that I wanted to try and give something back to readers. After all, if people were going to buy my novel, tell their friends about it, and lend me their support, the least I could do was to be supportive in return. I opted to place a letter at the end of Beneath a Marble Sky that invited book clubs to invite me to participate in their discussions. I included my e-mail address. To be honest, I wasn’t quite sure how my proposal would be received, though I had a hunch that readers wished for such interaction.

I was fortunate in that over the following few months, Newsweek magazine and the CBS Evening News did stories on my book club program. And as a result of this publicity, I was inundated with requests to talk with book clubs. In fact, over the course of the ensuing year, I spoke (usually via speakerphone) with more than one thousand book clubs. Most of these clubs were based in the United States, though I spoke with groups from Canada to Zambia. And while most clubs were fairly traditional in their approach, others decided to wear saris, cook Indian food, hire henna painters—thereby getting into the spirit of Beneath a Marble Sky.

Chatting with more than one thousand book clubs gave me a true appreciation for how carefully people read books. Time and time again, readers greatly impressed me with their insightful questions. As a result, I learned to never take the reader for granted. If people are going to invest hard-earned money into a book, and then take the time to read it, they deserve to experience something memorable.

I’d like to end this note by expressing my profound gratitude to readers. Thank you for all of your support and encouragement.

Set in the backdrop of World War II, Beside a Burning Sea follows a man and woman from separate worlds, as the barbarity of war looms in the distance.

One moment, the hospital ship Benevolence glides through the Pacific. In the next, it is engulfed in chaos, split in two by a torpedo. A small group of survivors makes it to the deserted shore of a nearby island, including Akira, a wounded Japanese soldier who saves a young nurse from death.

Akira has spent five years surrounded by blood and horror. Now, surrounded by those he is supposed to hate, he instead finds solace in their company. Sharing the mystery and beauty of his favorite poems with the beautiful American woman he has rescued, he watches as the other survivors confront their own passions and demons. In their midst, a secret held by one of the castaways may determine whether any of them will ever see their homelands again.

John Shors traveled extensively throughout Asia after graduating from Colorado College in 1991. More recently, he worked in his hometown as a newspaper reporter in his hometown, Des Moines, Iowa, before entering public relations and moving to Boulder, Colorado.

AN INTERVIEW WITH JOHN SHORS

During your conversations with more than one thousand book clubs, what have been some of your more memorable moments?

The conversations were fantastic, of course. But even more so have been the letters and e-mails that I received afterward. These contained wonderful messages, as well as photos of the groups (oftentimes with members wearing saris and covered in henna paintings).

What’s something that you learned about book clubs during your many visits with them?

I was quite surprised at the diversity of the book clubs I encountered. Not in terms of race or religion or political orientation, but in their approach to discussing Beneath a Marble Sky. For instance, some book clubs would take a rather studious approach, and come prepared with a variety of insightful questions. Other groups would be well into their third round of margaritas. I was never really sure what kind of group I’d be talking with.

Why did you decide to write a novel set in World War II?

I’ve always been fascinated by World War II. And I’ve felt that in the West we’ve tended to focus on the war in Europe. Having lived in Asia for several years, I’ve been intrigued by the intricacies of the war in that part of the world.

Was it hard to go from writing about the Taj Mahal in Beneath a Marble Sky to World War II in Beside a Burning Sea?

I think that transitioning from one book to another is a difficult process. After spending such a long time writing Beneath a Marble Sky, I became quite connected to its characters. And having to create a batch of new characters for Beside a Burning Sea felt somewhat like learning a new language. The voices in both novels are fairly unique, I believe, and giving life to such voices was a time-consuming process.

Your first novel took place in India, and your second novel occurred in the South Pacific. Why do you like to write novels set overseas?

I was lucky enough to grow up reading, and have consumed a couple of books a week for most of my life. I have always most enjoyed novels that took me to a new place, and that taught me something. Such novels prompted me to explore much of the world, in fact. And after visiting so many wonderful places, I decided that I wanted to share such locales with my readers.

To that end, where will your next novel be set?

It will take place in modern-day Saigon, and will involve a variety of characters from different parts of the world. The story is quite close to my heart, and I’m excited to see it unfold.

What did you most enjoy about writing Beside a Burning Sea?

The challenge of creating a setting—of fashioning a time and place of my own design—is immensely gratifying to me. I want my readers to feel as if they’ve visited the environs that I describe, and giving my novels the necessary richness to achieve that goal is a rewarding challenge. Of course, I also greatly enjoy the process of creating the overall story, and then of sitting down and actually bringing that story to life.

For you, what is the hardest thing about writing?

I tend to edit my novels a lot, as I want them to be as good as possible. And sometimes it takes a great deal of willpower to try and focus on rereading my novel for, say, the twentieth time. I console myself with the knowledge that each edit makes the book better, but that doesn’t make each edit any easier.

Poetry plays a prominent role in Beside a Burning Sea. Why did you decide to add this element to your novel?

Having lived in Japan, I’ve long had an appreciation for the simple beauty of haikus. Starting each chapter of Beside a Burning Sea with a haiku (written from Akira’s perspective) was fun for me as a writer. I hope readers enjoy these musings. Additionally, I felt that poetry—or a love of such inward exploration—was a thread that could be used to connect Annie and Akira.

How much of your success do you attribute to the book club program that you launched with your first novel?

Publishing is an extremely competitive industry. A great number of good books exist, but many simply don’t sell. The fact thatBeneath a Marble Sky is available in fifteen languages and is selling briskly throughout much of the world is due in large part to all of the wonderful book clubs that I spoke with. These clubs (as well as individual readers, of course) have been tremendously supportive of me, and have really championed my novel.

Simply that I continue to be grateful for their support.

Learn More About Beside a Burning Sea
print

The Eagle of the Ninth
Rosemary Sutcliff

The Purple Shroud
Stella Duffy
Back to Top