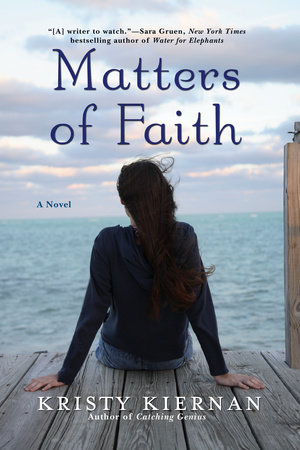 From the author of Catching Genius, a novel of a young man’s search for faith—and its unintended consequences.

At age twelve, Marshall Tobias saw his best friend killed by a train. It was then that he began his search for faith—delving into one tradition, then discarding it for another. His parents, however, have little time for spiritual contemplation. Their focus has been on his little sister Megan, who suffers from severe food allergies. Now Marshall is home from college with his first real girlfriend, but there is more to Ada than meets the eye—including her beliefs about the evils of medical intervention. What follows is a crisis that tests not only faith, but the limits of family, forgiveness, and our need to believe.

Kristy was born in Tennessee and raised on the beaches of southwest Florida, where she still resides with her husband, Richard, and their dog.

Her first novel, Catching Genius, was published in March of 2007 and has become a book club favorite. Her second novel, Matters of Faith, was published in August of 2008 and has garnered great review coverage.

A Place for Us
Liza Gyllenhaal

The Hole in the Middle
Kate Hilton

Love and Biology at the Center of the Universe
Jennie Shortridge

Hold Up the Sky
Patricia Sprinkle

You Were Meant for Me
Yona Zeldis McDonough
Back to Top