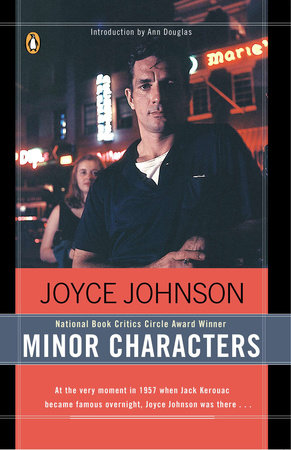 1. Why were misogynistic attitudes so pervasive in America in the 1950s? How much have attitudes toward women changed since then? Or are we seeing a resurgence of 1950s thinking?

2. Why did Johnson call her memoir Minor Characters? Are Kerouac and Ginsberg the major characters in her book or Johnson and Elise Cowen?

3. What messages in On the Road spoke powerfully to women as well as men back in 1957? Do they still?

4. Was the publication of On the Road the event that started the culture war? Has this novel found a secure place in the American literary canon, or is it still perceived as an outlaw work?

5. Why are some women so attracted to challenging—even hopelessly “impossible”—men? Are there still relationships like the one Johnson had with Kerouac? Can a woman like Johnson find a certain kind of freedom in loving a man who won’t commit?

6. Why have so few women writers emerged from the 1950s and early sixties? Are there other women writers readers should be rediscovering?

7. Why were the women of the Beat Generation unable to transform the kinds of relationships they had with men? What were the penalties for sexual liberation sixty years ago?

8. Would Elise Cowen have survived if she had been born a decade later? Why did she never share her poems with friends while she was alive?
Learn More About Minor Characters
print

A Life of My Own
Claire Tomalin

The Sun and Her Stars
Donna Rifkind

The Woman Behind the New Deal
Kirstin Downey

A Mind Spread Out on the Ground
Alicia Elliott