Who Would Have Thought It? Reader’s Guide 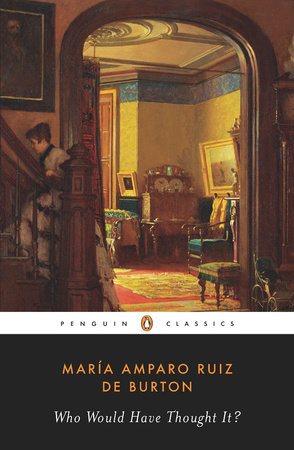 Who Would Have Thought It? Reader’s Guide

print
Who Would Have Thought It? Reader’s Guide

In the more than 140 years since the end of the American Civil War, most Americans have growncomfortable with a conventional narrative of that conflict. For the most part, we regard Abraham Lincoln as a decisive, clear–sighted leader; we deplore the slaveholding policies of the Old South; and we hail as righteous the efforts of the Northern armies to preserve the Union and abolish slavery. For these reasons and others, modern readers are likely to find in the pages of Who Would Have Thought It?—the 1872 debut novel of Mexican American novelist María Amparo Ruiz de Burton—a host of surprises. If for no other reason than that it is the first English–language novel ever written by a Mexican American, Who Would Have Thought It?would be worthy of attention. But Ruiz de Burton’s novel matters as much for its perspective as for the identity of the woman who wrote it. With relentless satire, Ruiz de Burton takes fierce exception to the supposed righteousness of antislavery New England, a place that the author regarded as rife with materialistic vanity, overt racism, and religious hypocrisy. A precursor to the era of muckrakers that included Upton Sinclair with The Jungle and Frank Norris with The Octopus and taking the art of social criticism to within a hair’s breadth of social blasphemy, Who Would Have Thought It? may be one of the angriest novels you will ever read—and one of the most thought–provoking.

Ruiz de Burton’s story opens as the kindly Dr. Norval returns to his home in New England from along sojourn in the American West, bringing with him a dark, quiet girl named Lola Medina, a former captive of Mexican Indians. Entrusted by Lola’s dying mother with the obligation of caring for her, Norval intends to treat the girl as a member of his family. However, put off by her unusually dark complexion (Lola’s skin has been dyed black by her erstwhile captors), the people of Norval’s town, led by his own virulently racist wife, greet Lola with hostility—until they discover that she possesses a fortune in gold and precious gems. After speaking sympathetically on behalf of the Southern states that will soon secede from the Union, Norval is abruptly driven to flee the country. Word soon comes of his supposed death, and Lola is suddenly all but defenseless against the greed, hatred, and rapacity of Mrs. Norval. With the help of her venal and satanic minister, Reverend Hackwell, whose private lust for the young girl is equaled only by his desire to seize her fortune, Mrs. Norval plots to defraud Lola of her birthright. Only the Norvals’ earnest, handsome son Julian, who loves and hopes to marry Lola, stands between his mother and the achievement of her wicked desires. As war rages and avarice ascends, virtue and hope are imperiled, and both the future of Lola and the social and political ideals of the American republic hang in the balance. Savagely humorous, blackly pessimistic, Who Would Have Thought It? calls into question everything you thought you knew about Civil War America. With its ridicule of military heroism, its scornful depiction of the Lincoln administration, and its denunciations of the moral hollowness of northeastern life, Ruiz de Burton’s novel leaves few icons unshattered. And it leaves few readers unmoved.

María Amparo Ruiz was born in either Loreto or La Paz in the Mexican state of Baja California Sur. Her maternal grandfather was a military commander who also served as governor of his state. At the age of fifteen, near the close of the Mexican–American War, she met her future husband, a United States Army captain named Henry S. Burton, who took part in the capture of her hometown of La Paz. Soon after the Treaty of Guadalupe Hidalgo brought an end to the war, Ruiz and her mother moved north to Monterey, where they became American citizens. Overcoming both religious and political obstacles, she and Captain Burton were married in July 1849, less than a week after she turned seventeen. The couple moved to San Diego in 1852 and soon purchased a ranch, where they raised their two children until shortly before the outbreak of the Civil War. As that conflict loomed, the family moved to the East. Eventually promoted to brigadier general, Burton served honorably in the Union’s Army of the Potomac before being debilitated by malaria. He died of complications from the disease in 1869. Widowed at thirty–seven, Ruiz de Burton turned to writing as did many American women of her class (Harriet Beecher Stowe, Rebecca Harding Davis, Frances E. W. Harper, etc.) during the mid– to late nineteenth century. Her first novel, Who Would Have Thought It?, was published anonymously in 1872 and was the first novel in English by a Mexican living in the United States. It was followed in 1885 by a second novel, The Squatter and the Don, a bitter indictment of monopolistic capitalism. Ruiz de Burton also wrote a play based on the adventures of Don Quixote. She spent much of her later life fighting a legal battle over the property rights to her late husband’s ranch and managing a variety of business concerns, encompassing construction, agriculture, and cement manufacturing. Ruiz de Burton died in Chicago in 1895.

Learn More About Who Would Have Thought It?
print

The House of the Dead
Fyodor Dostoyevsky

The Naval War of 1812
Theodore Roosevelt

A Vocation and a Voice
Kate Chopin

The Fox in the Attic
Richard Hughes

The Red Badge of Courage & “The Veteran”
Stephen Crane

Abraham Lincoln and the Road to Emancipation, 1861-1865
William K. Klingaman

The Leaning Tower and Other Stories
Katherine Anne Porter

Medea and Her Children
Ludmila Ulitskaya
Back to Top