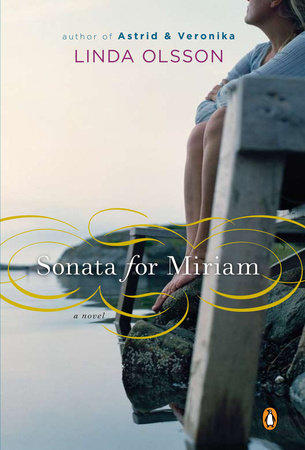 INTRODUCTION
Linda Olsson’s breathtaking debut novel Astrid & Veronika captivated readers and critics alike, establishing her as a lyrical, intelligent writer with an amazing talent for plumbing the depths of human emotion. Now, in her latest novel, Sonata for Miriam, Olsson confirms her reputation as a nuanced writer with a style that is both poetic and precise. With her unerring sense of detail, Olsson spins an elaborate web of love and sacrifice, grief and deceit, all set in motion by a single chance encounter.

Transfixed by a photo of a young Jewish man lost during World War II, violinist Adam Anker makes a shocking discovery: the man in the photo bears his name. Certain that there is a connection, he begins a conversation with the man’s surviving sister, and soon disappears into a labyrinth of memories and mysterious photographs, changed names and letters never received. Light is shed not only on the secrets of Adam’s family but also on his personal life, as his former lover Cecilia shares with him the truth of her own painful childhood, illuminating the joys of their romance as well as its heart wrenching dissolution. Further, as he tracks down his family’s history—and his mysterious namesake—he soon develops meaningful relationships with the lovers and siblings of the very people he is trying to find. As Adam sifts through the recollections of his new-found friends, he is drawn into his own reminiscence, returning again and again to the memory of his daughter Miriam, and the day that she died.

Weaving together interior monologue, letters, and conversation, Olsson’s writing is perfectly matched to the ephemeral world of memories and secrets which Adam must navigate. Following his journey, Olsson takes the reader to Vienna, Krakow, and Stockholm, all haunted by the secrets of love and loss in Adam’s past. It is in Krakow, witness to the public and private horrors of the Second World War, that Adam finally discovers the upheavals that occurred, and the long-lasting effects of momentous decisions made at a moment in time.

Wherever he visits, Adam finds voices long buried—“the elusive voices,” he believes, “whose absence had been at the center of my existence.” With the help of these voices, Adam begins to create the music that will fill the painful silence of his life and ultimately pay tribute to his lost daughter. In guiding him through this, Olsson avoids sentimentality and easy moral judgments, and instead explores how we balance the choices we make against the choices that are thrust upon us; how we behave in times of love, in times of grief, and in the times when we are caught between the two. In doing so, Olsson presents a rich multi-generational tale, as Adam moves forward and backward through time, each movement bringing him closer to understanding his own life.

Linda Olsson has a law degree from the University of Sweden, as well as a B.A. in English and German literature. After pursuing a career in finance, Olsson published her highly celebrated novel Astrid & Veronika, which has been published in numerous countries around the world. While Olsson was born in Sweden and has lived in Kenya, Singapore, Britain, and Japan, she currently resides in Auckland, New Zealand.

A CONVERSATION WITH LINDA OLSSON
Q. You introduce three sections in your novel with poems by Tadeusz Róz•ewicz and Tymoteusz Karpowicz. Could you tell your readers a little more about these poets and what their work means to you? How does poetry inform your writing?

When I first realized where this story wanted to go—to Poland—I was gripped by something I can only describe as panic. I had never been to Poland, I knew very little about the country and the people. For me, listening to music takes me wherever I want to, so I began by listening to Polish music. I then turned to the literature that comes closest to music—poetry. I don’t speak Polish, so I had to rely on translations. They were the finest, though, by eminent Nobel Prize laureate Czeslaw Milosz. And I was totally enchanted by the new world of literature that opened. I hope that for my readers the poetry will guide their reading, as it guided and inspired my writing.

Q. During the war, Wanda makes an enormous sacrifice for Adam; this is not only emotionally affecting but historically accurate, as many families were faced with similarly difficult decisions during WWII. Was this story inspired by the experience of anyone you know? Did you do a lot of historical research before writing Sonata for Miriam?

Yes, I did a lot of research. I read history, of course, and I traveled three times to Poland. I also went to Melbourne to meet Polish Holocaust survivors. They received me with warmth and generosity and their stories gave me a basis for my writing. But no single real experience is replicated in my novel.

Q. You convey Adam’s intensely intimate perspective without ever suffocating your reader with too much information. In terms of detail, how do you decide what is necessary to further the plot or create atmosphere, and what can be left to the reader’s imagination?

Perhaps because I see my stories rather than hear them, I expect my readers to see them, too. And if they can, not everything will need to be spelled out in the text. Or so I hope. I would like to think that they will get to know my characters just as I have, and that this will enable them to follow the story without everything being explicitly told on the page. A bit like when you are talking with someone you know well and you can just indicate something and know that the other person will follow your line of thought. It feels a little like what my character Cecilia says when she talks about her art in the novel: “It’s like ripping open your chest. Or letting somebody—everybody, anybody—into your soul. But then of course not everyone is able to interpret what is put in front of them. Or cares to. And that is a terrible risk too.”

Q. Your previous book, Astrid & Veronika, centered on the friendship and experiences of two women. With Sonata for Miriam, you’re writing mostly from a male perspective. Did you have any difficulties inhabiting that voice? What differences, if any, did you find in writing Adam’s story, as opposed to those of Astrid & Veronika?

Initially, it was terrifying. I worried endlessly, but for some reason he just wouldn’t go away. And as soon as I began to write it felt more and more natural. I listened to his story and I tried to write it down as it sounded to me. I came to like him very much, of course, and I hope that my readers—female and male— will be able to relate to his voice and that they will find it genuine.

Q. Initially, Cecilia is somewhat of cipher; we know she is a lover, perhaps a muse, but we don’t know the details of her life. Adam gradually reveals elements of their time together, but then the novel shifts to Cecilia’s perspective and we learn so much more. Why did you decide it was necessary to let her tell her own story?

I struggled with the technical form for a long time. In the end I felt that she had to be allowed to speak for herself. She is such a private person, an enigma to those who touch her world. Nobody else could possibly tell her story. When I had a first reaction from a (male) reader I was absolutely thrilled, and very relieved, to hear him say that Cecilia’s part of the book moved him the most.

Q. Your descriptions of the various locations in the novel are incredibly evocative. Do cities have particular personalities? Do they inspire specific moods in their visitors or inhabitants? How did you choose your locations for the novel?

Absolutely. The old cities of Europe are like old people to me. Friends. At the same time they are shaped by the people who inhabit them, of course. Under constant development, though often the changes are too gradual to be noticed during a human lifetime. Just like my character Adam, the city of Krakow came to me in a dreamlike fashion. I don’t know why. But once I realized the city would come to play such an important part in the novel I went there. I was unprepared for what it would be like. But just like Adam I walked the streets with an eerie sense of belonging. And I fell hopelessly in love with the city.

Q. What is your least favorite aspect of the writing process? How have you developed as a writer since your first novel? In your work, what are you most proud of?

I like all aspects of writing. It’s the not writing that is so hard. Days with no work done. Endless procrastination. I am proud of both my novels: proud that I have managed to finish what I started—and proud that I started. I think that I have possibly become a more conscious writer, and I am not sure that this is an entirely positive development.

Q. Describe your ideal reader. What kind of reader are you?

I touched on this above. It makes me very happy when readers tell me that they cried when they read my book. My ideal reader responds emotionally to the text, takes it on board and makes it his or her own. This is also how I like to read. Sadly, I am finding it increasingly difficult to read without noticing language or structure. But when it happens, when the text finds its way straight into my heart, then it’s a miracle.

Q. Music is a prominent feature in your writing. In what ways, if any, do you find writing and music to be sympathetic arts? Do you listen to music as you write? If so, are there any particular artists or works you find yourself returning to?

I listen to music all the time, and most certainly when I write. I think that music evokes emotions better than any other art form. A piece of music has the inherent ability to transport you in time or geographically in an instant. With Chopin or Szymon Laks’ music in my ears my study in Auckland became Krakow and Stockholm effortlessly.

Q. What are you currently working on? How much preparation do you require before writing your novels?

Nothing. Writing and releasing this second novel was probably more of challenge for me than I realized while it was still in my hands. Now, I wander around in a state of bewilderment, not sure what to with myself. But sometimes during my daily morning walk the odd idea emerges . . .

My second novel required a lot of research and reading, while the first novel drew mostly on material that was familiar to me. I have no idea where my next project might take me. Perhaps I should hope for a new challenge, being forced to enter unknown territory in some way.

Learn More About Sonata for Miriam
print
Back to Top