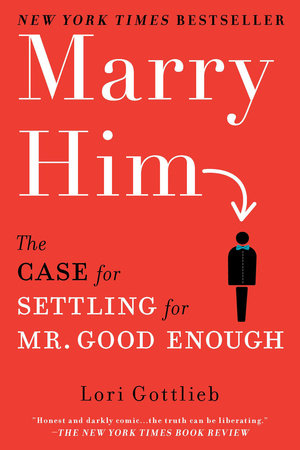 You have a fulfilling job, a great group of friends, the perfect apartment, and no shortage of dates. So what if you haven’t found The One just yet. Surely he’ll come along, right?

But what if he doesn’t? Or even worse, what if he already has, but you just didn’t realize it?

Suddenly finding herself forty and single, Lori Gottlieb said the unthinkable in her March 2008 article in The Atlantic: Maybe she and single women everywhere, needed to stop chasing the elusive Prince Charming and instead go for Mr. Good Enough.

Looking at her friends’ happy marriages to good enough guys who happen to be excellent husbands and fathers, Gottlieb declared it time to reevaluate what we really need in a partner. Her ideas created a firestorm of controversy from outlets like the Today show to The Washington Post, which wrote, “Given the perennial shortage of perfect men, Gottlieb’s probably got a point,” to Newsweek and NPR, which declared, “Lori Gottlieb didn’t want to take her mother’s advice to be less picky, but now that she’s turned forty, she wonders if her mother is right.” Women all over the world were talking. But while many people agreed that they should have more realistic expectations, what did that actually mean out in the real world, where Gottlieb and women like her were inexorably drawn to their “type”?

That’s where Marry Him comes in.

By looking at everything from culture to biology, in Marry Him Gottlieb frankly explores the dilemma that so many women today seem to face–how to reconcile the strong desire for a husband and family with a list of must-haves so long and complicated that many great guys get rejected out of the gate. Here Gottlieb shares her own journey in the quest for romantic fulfillment, and in the process gets wise guidance and surprising insights from marital researchers, matchmakers, dating coaches, behavioral economists, neuropsychologists, sociologists, couples therapists, divorce lawyers, and clergy–as well as single and married men and women, ranging in age from their twenties to their sixties.

Marry Him is an eye-opening, often funny, sometimes painful, and always truthful in-depth examination of the modern dating landscape, and ultimately, a provocative wake-up call about getting real about Mr. Right.

Lori Gottlieb is the author of the national bestseller Stick Figure: A Diary of My Former Self and a journalist whose work has appeared in The New York Times, The Atlantic, Time, People, Slate, Self, Glamour, Elle, Salon, and the Los Angeles Times. She is also a frequent commentator for NPR’s All Things Considered.

Learn More About Marry Him
print

What I Know Now
Ellyn Spragins

How to Act Right When Your Spouse Acts Wrong
Leslie Vernick

Text Me When You Get Home
Kayleen Schaefer

For Men Only, Revised and Updated Edition
Jeff Feldhahn and Shaunti Feldhahn

How to Improve Your Marriage Without Talking About It
Patricia Love, Ed.D. and Steven Stosny, PH.D

How to Be an Adult in Relationships
David Richo

Should I Stay or Should I Go?
Lundy Bancroft and JAC Patrissi

The Meaning of Marriage
Timothy Keller and Kathy Keller

How We Love, Expanded Edition
Milan Yerkovich and Kay Yerkovich

For Women Only, Revised and Updated Edition
Shaunti Feldhahn

Calling in “The One”
Katherine Woodward Thomas

Own Your Everyday
Jordan Lee Dooley

Too Good to Leave, Too Bad to Stay
Mira Kirshenbaum

All About Us
Philipp Keel

I Love You But I Don’t Trust You
Mira Kirshenbaum

Love as a Way of Life
Gary Chapman
Back to Top