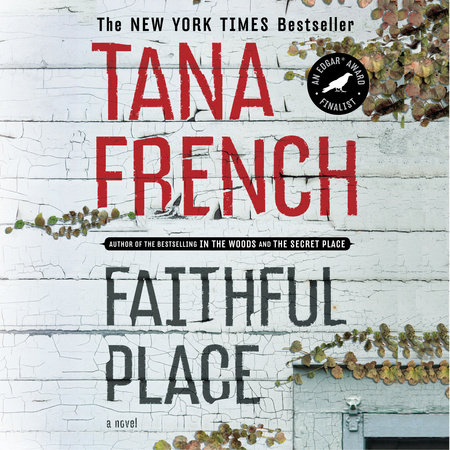 AN INTRODUCTION TO FAITHFUL PLACE

For twenty-two years, Frank Mackey was the one who got away. He endured a tough childhood in a tenement flat in Faithful Place, a rundown street in a working-class neighborhood in Dublin. He managed to cope with an alcoholic father, a volcanically ill-tempered mother, and four siblings, most of whom could barely stand the sight of one another. Then, at the age of nineteen, he saw a chance to run and took it, vanishing from Faithful Place overnight and working his way up to a respected position as an undercover police officer. But even though he got away, Frank could never forget the girl who got away from him: Rosie Daly, his first and best love, with whom he was planning to conquer the music business in London. There were supposed to be two runaways from Faithful Place that night, but Rosie never showed, and Frank has spent every year of his new, free life wondering why Rosie stood him up, whether she made it to London, and whether she might one day return.
Frank’s hopes for a joyous reunion come crashing down when workmen discover Rosie’s moldy suitcase in the abandoned house in Faithful Place where they had planned to rendezvous. The discovery brings Frank back to the sad streets of his youth—and face-to-face with his memories of lost love and the ongoing horror that is his family. Before long, there is a murder to solve, and then a second one, and only Frank has the knowledge, the will, and the courage to bring justice to Faithful Place. Frank never wanted to go home again—and he quickly learns how hard it can be to get away a second time.
A taut, gripping thriller that will keep readers in suspense until its closing pages, Faithful Place could only have been written by Tana French, winner of multiple awards for her brilliant debut novel In the Woods. As in her earlier work, French fills her pages with superb dialogue and marvelously drawn characters. In French’s fictional world, the answers are never tidy, motives are seldom pure, and justice can be more a problem than an answer. French creates a memorably complex, conflicted hero in Frank Mackey. Through his sometimes hardboiled, sometimes lyrical narration, French deftly explores the psychology of Dublin’s underclass, the darkest corners of family life, the glories of young love, and the tragedy of shattered dreams. And through all the dirt, stale beer, and threatening shadows, she holds before us, distant but never wholly out of reach, the possibilities of hope.

1. How does religion appear to have influenced the families who live in Faithful Place? Why do you think Frank Mackey has rejected religion?

2. Why do you think that teenagers like Frank and Rosie—the ones who try to get away—appear to be the exception rather than the rule in the Mackeys’ neighborhood?

3. Are Olivia and Jackie right or wrong to have taken Holly to visit Frank’s family without his knowledge or consent? Why?

4. What meanings, ironic or otherwise, can be derived from the title Faithful Place? How do those meanings resonate through the novel?

5. Frank tells us early in the novel that he would die for his kid (p. 3). Yet there are lesser things he chooses not to do, such as being civil to her mother and shielding her from having to testify in a murder trial. How well does Frank understand his feelings toward Holly? What are his blind spots where their relationship is concerned?

6. Why does Frank become so upset over Holly’s infatuation with pseudo-celebrity Celia Bailey (pp. 151–154)? Is his reaction pure, over-the-top exaggeration, or does he have a point?

7. Tana French makes extensive use of flashbacks to develop Rosie as a character and to flesh out Frank’s motivations. How would the novel be different if it were narrated in a strictly chronological fashion?

8. Shay insists that he and Frank are morally no different, and Frank is outraged by the suggestion. Is Shay right?

9. Frank would appear to have every right to blame his family for much of the chaos in his life. To what extent, however, do you think his finger pointing is an evasion of responsibilities that he would be wiser to accept?

10. What feelings do the characters in the novel have regarding the decade of the eighties? How does growing up in the eighties seem to have affected Frank, his siblings, and his friends?

11. Does the Irish setting of Faithful Place contribute significantly to the telling of the story, or do you find that French’s novel to be about humanity on a more universal level?

12. How does Frank’s emotional involvement in the cases of Rosie’s and Kevin’s deaths affect his ability to function as a detective? Is it always a hindrance to him, or are there ways in which it improves and deepens his insights?

13. Imagine that you are trying to persuade Holly to testify against Shay. What arguments or other tactics would you use? Do you think they would succeed?

14. Does Frank Mackey change over the course of the novel? What, if anything, does he learn?

15. Near the end of Faithful Place, Frank and Olivia seem to have begun to move tentatively toward a reconciliation. What do you think is the likelihood of their succeeding, and why?

A Banquet of Consequences
Elizabeth George

S is for Silence
Sue Grafton

Q is for Quarry
Sue Grafton

The Absent One
Jussi Adler-Olsen
Back to Top