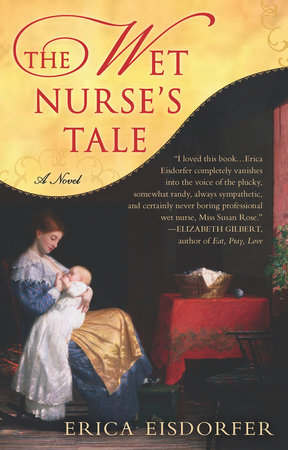 Susan Rose, like many lower-class women of Victorian England, she was born into a world that offered very few opportunities for the poor and unlovely. But Susan is the kind of plucky heroine who seeks her fortune, and finds it…with some help from, well, her breasts. Susan, you see, is a professional wet nurse; she breastfeeds the children of wealthy women who can’t, or won’t nurse their own babies.

Herself the daughter of a wet nurse, Susan first finds work as a maid at the local manor house. After a number of willing scullery-floor encounters with the master’s son, Susan becomes pregnant. Once her son is born, however, Susan realizes, as her mother did, that nursing the children of the rich will bring more money and security than sweeping and dusting at the manor. She leaves home to become a live-in wet nurse, working first in one house, and then another, always learning more about each family than they would probably like. But her own child is sold by her father when Susan is away, and sent to be fostered by a London lady who had lost her own baby. Determined to recover her son, Susan manages to convince his new mother, Mrs. Norval, to hire her as a wet nurse. But once reunited with her son, Susan finds the Norval home to be a much more sinister place than she’d ever expected. Dark and full of secrets, its master is in India, and its servants frightened by the mistress, for Mrs. Norval is a deeply disturbed woman, and the first baby who died in her home did so under very mysterious circumstances. Susan embarks on a terrifying scheme to rescue her son before he can meet the same fate.

Erica Eisdorfer was born and raised in Durham, North Carolina, and graduated from Duke University. She was the book reviewer for WUNC, an NPR affiliate, for eight years. Eisdorfer has managed the Bull’s Head Bookshop, the trade bookstore on the campus of the University of North Carolina at Chapel Hill, for twenty years. She lives in Carrboro with her husband and two daughters.

Light on Lucrezia
Jean Plaidy
Back to Top