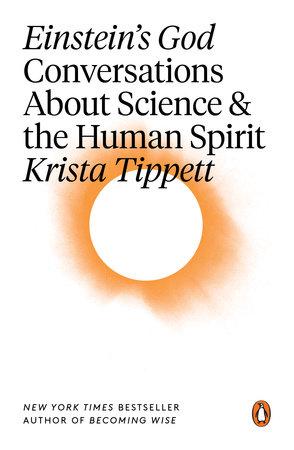 Albert Einstein did not believe in a personal God. And his famous quip that “God does not play dice with the universe” was a statement about quantum physics, not a statement of faith. But he did leave behind a fascinating, largely forgotten legacy of musings and writings-some serious, some whimsical-about the relationship between science and religion and his own inquisitive reverence for the “order deeply hidden behind everything”. Einstein’s self-described “cosmic religious sense” is intriguingly compatible with twenty-first-century sensibilities. And it is the starting point for Einstein’s God.

Drawn from American Public Media’s extraordinary program Speaking of Faith, the conversations in this profoundly illuminating book explore an emerging interface of inquiry-if not answers-between many fields of science, medicine, theology and philosophy. In her interviews with such luminaries as Freeman Dyson, Paul Davies, V. V. Raman, and Mehmet Oz, Krista Tippett draws out the connections between these realms, showing how even those most wedded to hard truths find spiritual enlightenment in the life of experiment and, in turn, raise questions that are richly theologically evocative. Whether she is speaking with celebrated surgeon and author Sherwin Nuland about the biology of the human spirit or questioning Darwin biographer James Moore about his subject’s religious beliefs, Tippett offers a rare look at the way our best minds grapple with the questions for which we all seek answers.

A journalist and former diplomat, Krista Tippett has created, hosted, and produced the popular public radio program Speaking of Faith since it began as an occasional feature in 2000, before taking on its current form as a national weekly program in 2003. She came up with the idea for Speaking of Faith while consulting for the internationally renowned Institute for Ecumenical and Cultural Research at Saint John’s Abbey and University in Collegeville, Minnesota.

Chapter 1: The Human Legacy of a Great Mind and a Wise Man / Dyson and Davies

Chapter 2: The Spirit as an Emergent Life Force / Nuland

Chapter 5: Content with the Limits of Religion and Science / Raman

Chapter 7: Science That Liberates Us From Reductive Analyses / McCullough

Chapter 8: Knowing How to Heal Ourselves / Sternberg

Chapter 9: The Nature of Human Vitality / Solomon, Palmer, and Barrows

Chapter 10: On the Complementary Nature of Science and Religion / Polkinghorne

Metaphysics as a Guide to Morals
Iris Murdoch

Plato at the Googleplex
Rebecca Goldstein

Faith Versus Fact
Jerry A. Coyne

Beelzebub’s Tales to His Grandson
G. I. Gurdjieff

The Psychoanalysis of Fire
Gaston Bachelard

Pragmatism and Other Writings
William James

A God That Could be Real
Nancy Ellen Abrams

On Logic and the Theory of Science
Jean Cavailles

A User’s Guide to Capitalism and Schizophrenia
Brian Massumi

Reconstruction in Philosophy
John Dewey
Back to Top