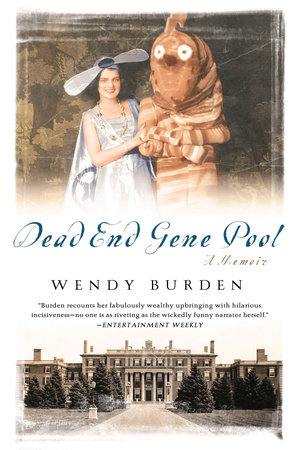 “In the future, I’d be able to resolve all kinds of things by invoking the proverbial “suffering is redemptive” theory. Like if my mother hadn’t married that dictatorial sphincter, I wouldn’t have acquired a sense of self so early in life. Or learned to drive a stick at twelve. And if my father hadn’t killed himself, I wouldn’t have inherited a few million at twenty-one. But that philosophy wasn’t working for me then, and I was as tortured as St. Augustine” (p. 151).

For the average kid, a father’s suicide is pretty high on the list of things that can screw up your childhood. But for Wendy Burden, a great-great-great-great granddaughter of Cornelius Vanderbilt, it was just one of a mind-boggling series of tragedies and dysfunctions that characterized life along her branch of the fabulously wealthy—and fabulously doomed—Vanderbilt dynasty.

By the time Wendy was seven, she and her brothers, Will and Edward, were pint-sized frequent fliers, shuttled off to visit their paternal grandparents while their jet-setting mother pursued the perfect tan and searched for a new male companion. Of course, Mr. and Mrs. William A. M. Burden II were more than happy to host their only grandsons at their palatial Manhattan apartment, winter getaway in Florida, and avant-garde summerhouse in Maine—but it was clear that a Burden granddaughterwas a second-class citizen.

So, despite her mother’s characteristically blunt advice that, “there are lots of little girls who’d give up growing tits for a chance to hang out on Fifth Avenue and be waited on by servants” (p. 12), Wendy just wanted to stay at home with her beloved, chain-smoking Scottish governess, Henrietta. Her protests ignored, Wendy consoled herself by playing tricks on the servants, turning her Easy-Bake Oven into a crematorium, and otherwise channeling her “soul sister,” Wednesday Addams (p. 34).

Yet, it was more than her grandfather’s blatant misogyny that disturbed Wendy. Even a child could see that all was not well in the opulent Burden household. Her father, William A. M. Burden III, had been his parents’ shining hope, and his death paved the way for what became their round-the-clock cocktail hour. The family fortune was still significant, but diminishing, and none of the three remaining sons were interested in bolstering it. Drinks in hand, the Burdens tried to groom Wendy’s brothers into worthy heirs.

Meanwhile, Wendy’s mother was charting her own course toward oblivion.

After being cut out of the Burden will, she teetered in and out of marriage to an arms dealer while subsisting on a diet of Bacardi and raw hamburger dipped in Lipton’s Onion Soup mix. During their occasional family vacations, she’d criticize Wendy’s figure while chiseling souvenir chunks off of famous landmarks like Stonehenge and Plymouth Rock.

Dead End Gene Pool is a darkly hilarious, compulsively readable memoir filled with jaw-dropping details from the ultimate insider. Equipped with unwavering honesty and an acerbic sense of humor reminiscent of David Sedaris, Wendy turns the poor-little-rich-girl trope on its head in this riveting, tragic-comic account of growing up amid the not-so-glittering ruins of one of America’s richest and most prominent families.

Wendy Burden is a former illustrator, zoo keeper, taxidermist, owner and chef of the bistro Chez Wendy, and the art director of a pornographic magazine—from which she was fired for being too tasteful. She lives in Portland, Oregon.

A CONVERSATION WITH WENDY BURDEN

Q. What spurred you to write this memoir, now?

People dying like crazy is what spurred me to write it. It forces you to try to make sense of your life.

Q. Gloria Vanderbilt and CNN’s Anderson Cooper are distant cousins of yours. Overall, how have the other branches of the Vanderbilt clan fared?

I’ve never known the Burden side of the family to intertwine with others, but this spring I’ve been invited to attend the annual Vanderbilt bulb planting/clean up of the Commodore’s tomb, so I’ll let you know.

Q. You’ve certainly experienced more than your share of tragedy. And, if you read the tabloids, it seems as if the rich are more prone to spectacular tragedy. What are your thoughts?

First of all, I don’t see it as “tragedy.” I was never hungry, I was never raped by a relative; that is tragedy. Everyone experiences adversity; people just like to read about misfortune affecting the wealthy because it shows that their money can’t protect them.

Q. During your time in England, you spent a lot of time with the working-class Dorans. In retrospect, do you think you would have had a happier childhood growing up in their family?

No, but certainly not less happy.

Q. In describing your grandparents’ household, you write that, “the most important person in the household was the chef” (p. 66). Did this influence your decision to become a chef and restaurateur later in life?

I cook to eat! I am a total glutton.

Q. In an interview you did before Dead End Gene Pool was published, you share that it was initially conceived as a cookbook. How did it become a memoir?

I became increasingly anecdotal, and on top of that, the sudden cluster of deaths within my family…certainly food for thought, no pun intended.

Q. Was your grandfather a foodie ahead of his time, or have the rich always had an obsession with eating and drinking? If you could prepare and serve your grandparents one final meal, what would it be?

It’s not that the rich necessarily enjoy it more, I mean look at all the wealthy anorexics you see in restaurants or in pictures in the social columns. I think historically the rich could afford to cultivate food and drink, and could travel to different countries and experience French or Italian cuisines in their own environment. The final meal I’d cook for my grandmother would definitely be a big fat steak. She loved red meat. For my grandfather I’d make Terrapin à la Florham, which is an incredibly labor intensive dish his grandmother’s chef used to make. It’s probably illegal now.

Q. You very casually recount two instances of what would now be called sexual abuse: being bitten on the butt by Arturo, the Italian chef, and being fondled and kissed by the captain. Your mother dismissed your complaints about the captain by saying, “Let an old man have some fun! Anyway, he got his nuts shot off in the war, so it’s not like he can really doanything” (p. 97). How do you feel, if at all, it has affected you later in life?

I don’t see the butt-biting as sexual abuse; I honestly think that’s what they did in his country when they were really pleased by something a kid did. What happened with the Captain, well I kind of shelved it at the time, and frankly, compared to things that were done to so many women I know, from all different socio-economic backgrounds, I got off pretty lucky because that was the only transgression that ever really happened to me.

Q. How did your relationship with your mother affect your views on parenting?

I could only do better!

Q. Your Uncle Bob exposed you to the works of Robert Louis Stevenson and Edgar Allen Poe the same day that you discovered newspaper obituaries. Would it be fair to say that literature saved you?

If the cartoon captions of Charles Addams is considered literature, then definitely.

Q. In your opinion, what is the most important character trait a child born to great wealth needs to avoid being warped by all the money?

Q. Do you have plans for another book?

I’m working on a book about great love, great loss, and learning to fly an airplane.

After the Falls
Catherine Gildiner

Oh the Glory of It All
Sean Wilsey

Why Not Say What Happened?
Ivana Lowell

The Duke of Deception
Geoffrey Wolff

Dancing Through It
Jenifer Ringer

Too Close to the Falls
Catherine Gildiner

The Clancys of Queens
Tara Clancy

I’ll Drink to That
Betty Halbreich and Rebecca Paley

My Point…And I Do Have One
Ellen Degeneres

Beyond Order
Jordan B. Peterson
Back to Top