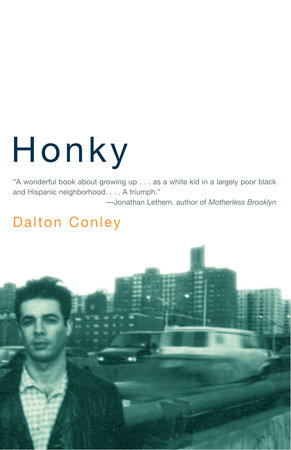 "A wonderful book about growing up . . . as a white kid in a largely poor black and hispanic neighborhood. . . . A triumph." –Jonathan Lethem, author of Motherless Brooklyn

The introduction, discussion questions, author biography, and suggested reading list that follow are designed to enhance your group’s reading of Dalton Conley’s Honky, a vivid and richly insightful memoir about growing up white in the predominantly black and Latino projects of New York’s Lower East Side.

In America, being white usually means being a member of the majority. But for Dalton Conley, son of artistic but impoverished "middle-class" parents, the situation is reversed: he is virtually the only white kid in the housing complex in which he spends his most formative years. He describes his childhood as a kind of social science experiment to discover the real meaning of being middle class "by raising a kid from a so-called good family in a so-called bad neighborhood" [p. xiii]. This unique perspective, along with Conley’s restless curiosity, provides a fresh and surprising look at the intersecting issues of race and class in America.

At first, Conley is unaware of racial differences, so much so that he tries to acquire a sister by kidnapping a black baby. But as he begins to learn the complex codes that register and regulate racial status, he tries desperately to fit in with his black and Latino neighbors. The results are mixed, as he develops friendships with Marcus and later Jerome but nearly has his throat slit in a skirmish with a member of the local gang, the Junior Outlaws. When his parents transfer him to P.S. 41 in the upscale West Village, Conley begins to live a dual existence, spending his school days with the children of wealthy white families and returning each afternoon to the violence and graffiti, the "four-color, in-your-face poverty" of his own neighborhood. And it is this straddling of two worlds, two neighborhoods, two cultures, two vastly disparate sets of expectations, that allows Conley to see more clearly how race and class really operate in America, and to perceive all the subtle but profoundly important privileges even an impoverished white kid enjoys over his darker-skinned peers.

As taut and dramatic as the best fiction but filled with the kind of insights that can emerge only from lived experience, Honky tells the riveting story of one boy’s awakening to the problems of race and class that still affect us all.

1) Dalton Conley begins by asserting that he is "not your typical middle-class white male," and that his childhood was like "a social science experiment" [p. xiii]. What is the value of such an experiment? How much do you think Conley’s parents’ decision to live in the projects was a matter of choice and how much was it out of their control? How much choice does any family ultimately have–black or white? How does Conley’s unique experience shed light on the values and assumptions of more conventional middle-class whites?

2) Conley says that "race and class are nothing more than a set of stories we tell ourselves to get through the world, to organize our reality" [p. xiv]. What does it mean to treat race and class as subjective rather than fixed and objective categories? In what ways does Honky bear out Conley’s thesis? How do his experiences help him understand the tangled issues of race and class?

4) Conley vividly describes the poverty and violence of the projects in which he grows up, a place where he is ashamed to bring his white friend Michael and where his own life has been threatened. And yet when the family decides to move, he is reluctant to leave Avenue D behind. Why is he so attached to that world? What are the positive qualities of his neighborhood and the people who live there?

5) In the Author’s Note, Conley argues that while his book lacks the scientific rigor of an ethnography, it compensates with the depth of insight that comes from living in a social setting, "rather than swooping in from afar to gather data for a time before going home to dinner and one’s real life" [p. 205]. What are the most significant insights that Honky offers? In what ways is Conley’s firsthand experience more valuable than scientific data?

6) After Conley accidentally sets fire to his friend Raphael’s apartment, he realizes, "Had the fire not been in Chelsea but down the street from our house in one of the row tenements that lined Avenue D–or had I been of a different skin tone–the whole matter might not have been settled so casually" [p. 181]. What other experiences make Conley aware of his privileged status as a white person? What effect do these revelations have on him?

7) What coping strategy does Conley employ after the shooting of his best friend, Jerome? What does he try to achieve through this behavior? What does it suggest about the effects of living in a violent environment on young children?

8) When Conley wonders about why his life has turned out as it has, he writes, "I can believe what I want to believe. This is the privilege of the middle and upper classes in America–the right to make up the reasons things turn out the way they do, to construct our own narratives rather than having the media and society do it for us" [p. 110]. In what ways do the media and society construct the narratives of blacks and other minorities in America? What are those narratives? What purposes do they serve for the dominant ethnic group? What effects do they have on minorities?

9) What does Conley discover about race and class when he changes from P.S. 4 in the projects to P.S. 41 in the West Village? What does he learn about the different codes for fitting in and being an outcast? How does his experience away from the projects allow him to see them, and his own minority position within them, more clearly? Do you find fault with Conley’s parents for lying about their address to the school board? Why or why not?

10) In one of the strange ironies of race relations that Honky explores, Conley longs to be called "nigga" by his black friends. "Every time [Marcus] applied the word to me I relished the sound of it, as I might savor an exotic delicacy"[p. 123]. What does being called "nigga" signify to Conley? What does it mean that he can’t say the word himself? What might account for the transformation of this hateful racial epithet into a term of approbation among blacks?

11) Honky ends abruptly when Jerome asks the Conley family why they have moved to Chelsea. Mrs. Conley replies, "Because of you." What does she mean?

12) In what ways does Honky illustrate, rather than merely assert, the privileges that even poor whites like the Conleys can enjoy in the United States? Why is Conley, unlike most of his neighbors in the projects, able to get a first-rate education and a prestigious job?

13) What role, if any, does the background and education level of Mr. and Mrs. Conley play in their ability to secure advantages for their family? Is skin color the only factor that influences a person’s socioeconomic status?

14) Honky is about race and class, but it is also a memoir about family and about growing up. How do Conley’s mother and father shape his character? In what ways do his friends influence him? What about his personality made his time in the Lower East Side more difficult than it needed to be? Is it surprising, given his childhood, that Conley should end up as a sociologist and writer? What qualities of Conley’s personality suit him to this choice?

15) Although Honky is concerned with telling a story rather than making an argument, what larger conclusions might be drawn from the book? Based on the experiences that Conley relates, what proposals could be made for improving the lives of inner-city minorities?

Dalton Conley is Associate Professor of Sociology and Director of the Center for Advanced Social Science Research at New York University. Previously he taught in the departments of Sociology and African American Studies at Yale University. He is the author of Being Black, Living in the Red: Race, Wealth, and Social Policy in America.

The Meaning of Michelle
Veronica Chambers

In My Place
Charlayne Hunter-Gault

The Power Broker: Volume 3 of 3
Robert A. Caro

When Character Was King
Peggy Noonan

The Duke of Deception
Geoffrey Wolff

Photographs of My Father
Paul Spike