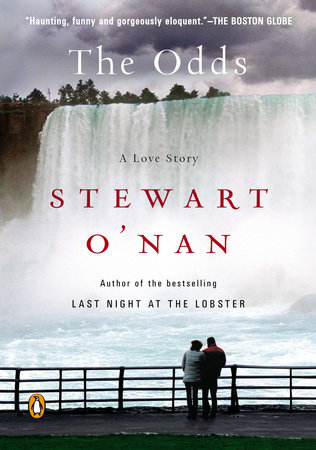 INTRODUCTION
Faced with unemployment, foreclosure, and a drowning marriage, Art and Marion Fowler are a suburban couple struggling to maintain the appearance of the American dream even as their lives slowly disintegrate. Living on credit and looking toward bankruptcy, Art hatches a seemingly impossible plan: take what little money they have left to a Niagara Falls casino and hope that over the course of a weekend, they can win enough back to save themselves. It’s an act that is equal parts desperation and optimism, and it is the interplay between these two emotions that runs like a current through Stewart O’Nan’s novel The Odds. Alternating between Marion and Art’s respective doubts, fears, and hopes, the book delicately traces their weekend together at the edge of the Falls and on the precipice of their future.

Nearly thirty years ago, Art and Marion honeymooned at Niagara Falls and Art hopes that returning will not only recoup their financial losses but also recover the happiness of those early days, erasing the hurt that has accumulated over three decades. In a luxury honeymoon suite and with a new diamond ring in his pocket, Art plans to reignite Marion’s love for him and release them both from the memories of his infidelity twenty years earlier. He is hopeful yet hesitant, hindered by flashes of self–criticism, guilt, and erotic memories of his old lover. Marion, on the other hand, is haunted by the memories of her own mistakes and is preparing to return home ready for divorce.

O’Nan’s novel is a study in the power of last chances, of the value of the crazy gesture in the face of an oppressive reality; the trip is an escape from their old selves, and Art and Marion, for better and for worse, are running away together. Amid the subtle recriminations and regrets that come from decades of marriage, there is also the intimacy of inside jokes and finishing each other’s sentences, the familiarity of each other’s bodies and desires. Art and Marion make love, share old memories, and find themselves cheering each other on in their absurd adventure. They have brought their entire lives to the casino, and neither knows how the gamble will pay off.

Stewart O’Nan was born and raised in Pittsburgh, Pennsylvania. His novels include Songs for the Missing, Last Night at the Lobster, and Emily, Alone. His nonfiction works include Faithful, a chronicle of the 2004 Boston Red Sox, which he co–authored with Stephen King. He currently resides in Pittsburgh with his family. This is his thirteenth novel.

A CONVERSATION WITH STEWART O’NAN
Q. Many of your novels, such as Last Night at the Lobster and Emily, Alone, focus on the frustrations and dramas of daily life and people’s response to the circumstances that fate assigns them. What is appealing to you about telling these quieter, more intimate stories? Do you see yourself as a chronicler of contemporary American life?

I guess my focus lately has been more on the immediate world around me—the hidden stories that are shared by millions of people every day. My hope is that by showing what’s important to regular people, readers might add their own life experiences to those of my characters so that the book means something to them other than an escape. And, also, that they might spend some meaningful time with a person they’d otherwise never notice.

I wouldn’t say I’m a chronicler of American life, since that seems kind of dry and clinical, though I do seem drawn again and again to very American concepts of success and failure, innocence and experience, faith and despair. And the many layers that make up the country.

Q. What is the significance of the Dinah Washington lyrics that open the novel? Was this song always important to you?

I discovered Dinah Washington’s version of “Wheel of Fortune” just by luck, while I was in the middle of the first draft, and it seemed so much to fit Art and Marion’s situation, especially the romantic’s hope of “If you’ll ever smile on me, please let it be now.”

Q. The Odds is a novel rich in emotion but spare in prose. Do your first drafts begin in this economical style or is your process of rewriting one of paring away unnecessary detail with each revision? How many drafts do you typically write? How long does the process take?

I’d call the prose clear rather than spare, since I did give myself fair leeway in terms of figurative language (anyone dropping “zoetropically” can’t honestly be called spare). But sentence–wise it’s not the winding, clause–clotted Jamesian approach I used in Emily, Alone, and that was a decision I made early on. I only did four or five full drafts of this one, since it’s small and came out pretty clean. It’s essentially a duet, with a contained time frame and unified setting. There are nowhere near as many moving parts as in, say, Songs for the Missing or even Last Night at the Lobster, which had a broad supporting cast. Overall this one took about a year from start to finish, which is pretty quick.

Q. On page 28, Art says, “This is Niagara Falls, nothing’s real here.” Why did you choose Niagara Falls, a destination known as much for its gaudiness as its association with romance, as the setting for this novel?

I liked the idea of using a public space to play out Art and Marion’s private drama. As with the Red Lobster, the reader already has a certain feel for Niagara Falls, and its insistence on romance and splendor is a perfect foil for what Art and Marion are fighting.

Q. This is not just a character–driven novel, but one with a very small cast. Readers are intimately involved with every aspect of Art and Marion’s thoughts and feelings, and their enjoyment of the book succeeds or fails on their emotional connection with these two characters. Did this intense focus feel risky to you? When writing, did you feel a particular sympathy for one character or the other?

It’s the story of a marriage that’s reached a very shaky middle age, and to show the effect of that on both characters means the reader needs to be intimate with both, trying, by getting and staying close, to understand what they themselves can’t make sense of (love and the loss of love both being mysterious), and not choosing one over the other. The risk is that in trying to make both appealing, you’ll fail to tell the truth of how it really feels to be in that situation. Better to opt for honesty and hope the reader can empathize with both characters. Neither is heroic, and yet, while they’ve made some regrettable, even stupid, choices, I think they’re decent people, and I sympathize with both of them.

Q. The rhetorical device of opening each chapter with the likely odds for the events within that chapter is witty and entertaining. Clearly some are tongue–in–cheek but others are not; how did you come up with these figures?

Most of the figures came from a book called What Are the Odds? Others I tracked down online. The scariest was the one with the Cleveland Indians winning the World Series. As I was finishing the book, they were still in first place. Luckily, the odds caught up with them.

Q. Much of Art and Marion’s financial difficulty stems from their home—the mortgage, the cost of repairs and maintenance, etc.—yet for many people, owning a home is an integral part of the American dream. Why is this? Looking at the state of the economy and the current housing situation, is this aspiration doing us more harm than good?

Because the United States is so vast, it’s natural that having your own little piece of it is part of the American dream. In the past, it was also the best investment you could make. Buy low, take good care of your place and raise the kids there, then sell it and retire on the profits. For several generations that was the formula for success. That hasn’t been true for a while, as the collapse of the real estate market and subsequently the nation’s economy showed. But that doesn’t stop us from wanting a place we can call our own.

Q. The novel ends on a surprisingly positive note. Would you say that you’re an optimist?

I’m definitely an optimist. No matter how bad things are, I’m always hoping something good will happen.

Q. What happens to Art and Marion after the close of the book? Will they both be happy ten years from now?

Originally, I was going to follow Art and Marion home the next morning, and then speed up time to show the reader how this windfall complicates things—how it postpones but doesn’t truly alter what was going to happen to them. But then I thought: life isn’t like that. It doesn’t wrap up and leave us with just a flat end result. Life is the high and the low moments and everything in between, and here’s a special, singular moment, a weird vantage point from which to look back and say, yes, this is wild, but really, those thirty years, with all their hard work and tears and compromise, were the real payoff. Married life.

Q. Although you are primarily a novelist, you have also published nonfiction. In terms of artistic satisfaction or challenge, what does one medium provide that the other does not? What is your next project?

Both fiction and nonfiction provide the pleasure of discovery. With fiction, it’s in the writing and in the daydreaming about the characters and their situations. In nonfiction, more often the discovery’s in the research, the pleasure of unearthing facts or connections you had no idea existed. The writing itself is less revelatory.

Not sure what my next project is. I’ve got several clamoring for the top spot. Typically, one will get hot and nudge the others aside, but I won’t know that till I spend a few months at my desk.


Learn More About The Odds
print

By the Lake
John McGahern

After the End
Clare Mackintosh
Back to Top