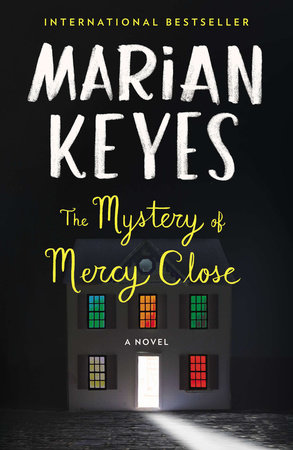 Helen Walsh doesn’t believe in fear—it’s just something men invented to get all the money—and yet she’s sinking. Her private investigator business has dried up, her flat has been repossessed, and now some old demons are resurfacing. Chief among them is her charming but dodgy ex-boyfriend Jay Parker, who offers Helen a lucrative missing-persons case. Wayne Diffney from boyband Laddz vanished from his house in Mercy Close—and the Laddz have a sellout comeback gig in five days.

Helen has a new boyfriend, but Jay’s reappearance proves unsettling. Playing by her own rules, Helen is drawn into a dark and glamorous world, where her own worst enemy is her own head and where increasingly the only person she feels connected to is Wayne, a man she has never even met.

Marian Keyes, a preeminent writer of contemporary women’s fiction, is the internationally bestselling author of more than ten novels, a cookbook, and two autobiographical works. She lives in Dún Laoghaire, Ireland, with her husband.

A CONVERSATION WITH MARIAN KEYES

1. You manage to create such a whip-smart, charming, and humorous character in Helen Walsh – how did you balance the levity of her voice with the serious subject matter of depression?

Thank you for saying such nice things about her. She was a challenging character to write about because she already existed before The Mystery of Mercy Close – she’s appeared in the four books I’ve already written about the Walsh sisters and even though she hasn’t had a starrring role until now, she was a very unforgettable person and she came with certain characteristics that I couldn’t ignore – she’s outspoken, almost fearless. Over the years, countless people have told me that Helen is their favourite Walsh sister and said they were longing for Helen to have a book of her own. But I thought that would never happen because she’s so different to me. I’m only interested in writing about nuanced women with some sort of vulnerability and Helen seemed impermeable. But then, as luck would have it (!) I experienced a major depressive episode and even though it was horrible and went on for a long time, it became clear to me that this was something that could happen to Helen. So, you could say I grafted my own pain onto Helen’s pre-exisiting character and it resulted in a new person.

2. The Mystery of Mercy Close is told in 71 brief chapters, detailing events that took place over the course of six days. Why did you choose to structure the novel this way?

That’s a tough question to answer because I write intuitively rather than logically – I tell a story first and then overlay a structure at the end. (And it’s something I agonise about. I can’t tell you the number of conversations I’ve had with my husband when I’ve put my face in my hands and wailed, “But how am I going to structure it?” And he always says, “Just write it and you can worry about the arrangement at the end.” And he’s always been right.)

So let me have a think. Okay: I knew the story had to take place over a short period of time because although The Mystery of Mercy Close is much more than a thriller/mystery, it is a book with a ‘ticking-clock’ narrative. It’s hard for the reader to have a sense of urgency if the deadline (in this case, Wayne’s concert) is a month, rather than less than a week, away – every moment has to matter. At the same time as Helen is trying to find Wayne, she’s undergoing her own personal unravelling and that too needed to be conveyed as time-critical.

However! I know – because I read a huge amount myself – that 6 chapters (one per day) are too few. The sense of, “I’ll just read one more chapter. And okay, just one more,” works best when chapters are short, when you can see that they only last 3 or 4 pages. For some books, long, langorous chapters work well, they entwine the reader into a dreamy atmosphere, but for the Mystery of Mercy Close, which is a speedy, urgent read, short chapters were perfect.

3. Now that the youngest Walsh sister has been written as the lead in her own novel, can you pick favorites? Which of the sisters do you think you’d get along with best?

Such a difficult question to answer because I love all five of them. In a way, Helen will always be my favourite because she’s fearless and will never let herself be pushed around by anyone – I wish I was more like her. But I feel a lot of admiration for Rachel for surviving addiction and making a good life for herself. I have great affection for Margaret – she’s so sensible and she managed to retain a cast-iron sense of self, which was a tough job in a family of such big characters. But Claire was the first sister I wrote about and I adore her sense of fun, which hasn’t changed in all these years. However, as I’ve got older, the characteristics I admire in people has changed and I value gentleness and kindness in my friends and I think Anna is the most tender of all the sisters.

Oh, I am shamefully intolerant, especially anything to do with noise. I swear I can hear the grass grow. Youths seem to follow me around and sit beside me on the bus, with their horrible head-phones blasting out the most irritating tinny sounds or worse still, something with a heavy bassline that makes everything vibrate. Also, I am wildly annoyed by the smell of cheap scented candles, vanilla is the very worse. And people who say “Pacifically” when they mean “Specifically.” I should really stop now – I’m starting to sound like a horrible person, when I’m not really – I’ll just say one more thing: celery. I cannot abide it! Or people who say, “Sweet potato wedges are just as delicious as ordinary potato wedges, but with a third fewer calories.” Because sweet potato wedges are not as delicious as ordinary potato wedges – I don’t mind making a deliberate decision to try and consume less calories by eating the sweet potato wedges, but I do resent being taken for a fool. Really, I’d better leave it at that…