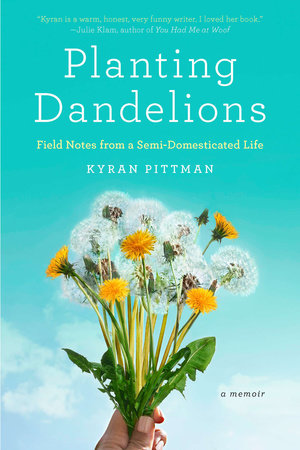 INTRODUCTION
In the family of Jen Lancaster and Elizabeth Gilbert, Kyran Pittman is the laid-back middle sister: warm and witty and confiding, with an addictively smart and genuine voice—but married with three kids and living in the heartland. Relatable and real, she writes about family in a way that highlights all its humor, while at the same time honoring its depth.

A regular contributor to Good Housekeeping, Pittman is well loved because she is funny and honest and self-deprecating, because her own household is in chaos (“semi-domesticated”), and because she inspires readers in their own domestic lives. In these eighteen linked, chronological essays, Pittman covers the first twelve years of becoming a family, writing candidly and hilariously about things like learning to maintain a marriage over time; dealing with the challenges of sex after childbirth; saying goodbye to her younger self and embracing the still attractive, forty-year-old version; and trying to “recession-proof” her family (i.e., downsize to avoid foreclosure).

From a fresh new talent, celebrating the joys and trials of a new generation of parents, Planting Dandelions is an entertaining tribute to choosing the white-picket fence over all the other options available, even if you fail to live up to its ideals every day.

Kyran Pittman is a contributing writer for Good Housekeeping. She lives in Arkansas with her husband and three children.

How to Get Divorced by 30
Sascha Rothchild

What a Difference a Dog Makes
Dana Jennings

I Do, Now What?
Giuliana Rancic and Bill Rancic

My Mom is a Fob
Serena Wu and Teresa Wu

Who Put the Skunk in the Trunk?
Phil Callaway

I’m Not the New Me
Wendy McClure

How I Came Into My Inheritance
Dorothy Gallagher

I Was a Child
Bruce Eric Kaplan

How to Be a Husband
Tim Dowling

Save the Date
Jen Doll

The Geography of Love
Glenda Burgess