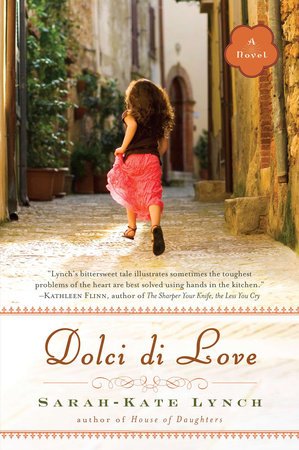 Lily Turner is a successful New York executive whose life is running according to her plan. She has the apartment she has always envisioned, the job at which she shines, and the marriage that everyone labels “perfect.” The only missing element in her otherwise ideal life is the thing for which she most yearns: a child.

Upon learning that her husband, Daniel, has a secret family in Tuscany, Lily travels to the sleepy town of Montevedova, Italy, to confront him. With the help of a collection of nonagenarian matchmakers called the Secret League of Widowed Darners, she discovers the truth about her husband’s infidelity, redefines the concept of family, and finds a way to mend her broken heart.

Dolci di Love is a novel about loss and its effect on our relationships; about letting go of our past heartaches to embrace the new dreams that emerge; and about, simply, love.

Sarah-Kate Lynch lives part of the year on the wild west coast of New Zealand but travels as often as she can to the vineyards of Champagne, the streets of New York, and the hilltop towns of Tuscany.

A CONVERSATION WITH SARAH-KATE LYNCH

Q. This story takes place mostly in Tuscany. What challenges did you face in constructing Montevedova? How important was this setting to your story?

Actually I faced very few challenges in constructing Montevedova because it is pretty much the existing town of Montepulciano! I discovered this medieval hilltop jewel on vacation with my husband and knew it was the perfect setting for a book because it looked like something out of a fairytale. I went back when I was halfway through the book and spent some more time there so felt I got to know it pretty well. There is a café called Poliziano, and a beautiful church called San Biagio, and a wonderful grand piazza—although I’m not the first person to discover that: it features in the second Twilight movie. Setting is always very important to me because I want to create a world that the reader feels happy “visiting”. With Montevedova, the aim was to present Lily with the staggering beauty of Tuscany, a place she’d never particularly wanted to visit, to arouse a little awe in her surroundings… the beginning of the thaw for her frozen emotions.

Q. Dolci di Love boasts many colorful characters. What elements do you feel are most important in constructing a character? Which character did you have most fun writing about?

Developing a main character is a pretty serious proposition. You basically start from scratch, with them as a baby, and imagine everything upwards from there. Very little of this background ends up in the book but it’s how you, as an author, get to know them. My characters don’t land in my lap fully formed—they reveal themselves as the book progresses. Sometimes not fast enough. Indeed, sometimes I even interview them to speed up the discovery process! Knowing all there is to know about your character means you can make the right decisions for them when obstacles are placed in their way which will hopefully given them credibility. Credibility—even in a story that has more than just a little quirkiness—is essential. I loved inventing Violetta because she’s a complicated, slightly magical person, and you can never have enough of those. But Fiorella Fiorucci was hands-down the bees’ knees for me to write. She appeared on the page out of absolutely nowhere one day and changed the whole tone of the book. I love her to bits.

Q. In your acknowledgements, you thank a friend who experienced the loss of a child, reflected in your book by Lily’s loss of Baby Grace. What drew you to this story? What difficulties did you face in incorporating this story in your book?

I arrived in New York for a month-long stay just days after a close friend had had to give back the baby boy she was in the process of adopting. I was privy to a lot of her grief and it just tore me in two. We were walking through Soho one afternoon and a new mother with a baby in a sling walked past and my friend stopped what she was saying and started to cry. I’ve witnessed a few shattered dreams in my time but her heartbreak was overwhelming. In subsequent years, I’ve observed more and more of my friends struggling with infertility—it’s a hot potato when you’re in your 40s, let me tell you. This was definitely a theme I wanted to explore, but my friend’s experience of handing a baby back in a lawyer’s office, then driving away with nothing but an empty car seat is the image that was seared in my mind. It’s the moment when Lily’s heart starts to harden, so it was never hard to incorporate it into the story. In some ways, it’s where the story begins. The only difficulty, I suppose, was asking her if I could use her story as the last thing I wanted to do was upset her. I asked her before I even started the book, and was prepared to come up with another scenario, but actually she’s a journalist and had just written a first hand account of her experience so was fine with it. I know the acknowledgment made her cry! A better sort of crying I think. Her story has a happy ending because later that same year she did adopt a little girl who is a complete and utter delight, not the least because she mis-heard my name once and thinks I’m called Fairy-Cake!

Q. “Love” has a host of meanings throughout this book. What ideas about love did you want your readers to come away with? Which themes did you find most challenging?

I guess I want readers to see that love isn’t black and white. It isn’t perfect. You can love someone and still hurt them—on purpose or, worse in some ways, by mistake—and it doesn’t mean the love isn’t still there, it just means you’ve really messed it up and something needs to change if you want to get it back, or you need to reconfigure it into something new. One of the major themes that runs through the book is recognizing the need to adapt to changed circumstances. In the pursuit of happiness, Lily needs to adapt her idea of what the dream family is, Violetta needs to accept the limitations of ageing, and even the cantucci has to smarten up to remain relevant to the times. More challenging was the theme of forgiveness. Would I forgive my husband if he did what Daniel did? Well, for a start, I’ve told my husband I have planted a computer chip in his neck and if he goes to Tuscany and starts a secret family I will blow him to smithereens with just the press of a button. But if that malfunctioned and I went and found what Lily found, about him and about herself and the reality of life in general, I would give him a second chance. All the same, I hope he’s not reading this.

I’m so over doom and gloom at the moment and the book I am working on now definitely reflects that. It’s like playing with a ray of sunshine! My main character is a southern belle called Sugar in her late 30s who has rather mysteriously turned up in Manhattan with nothing but a birdbath and a hive of bees, which she keeps on the rooftop of her apartment building. Part Mary Poppins, part Samantha from Bewitched crossed with a little Dolly Parton, she uses honey and good manners to help and heal everyone around her but when she falls in love for the first time in 16 years, it’s she who’s in need of fixing. Only now, she needs more than honey. (OK, so there’s a cloud or two on the horizon.) Sugar is emerging as the warmest, funniest, most delicious character and I can’t wait to see where she’s taking me.

The Love of My Youth
Mary Gordon

My Dream of You
Nuala O’Faolain

Everything She Thought She Wanted
Elizabeth Buchan

Memories of a Marriage
Louis Begley

Me and Mr. Darcy
Alexandra Potter

The Myth of You and Me
Leah Stewart

Nothing But You
New Yorker Magazine

Jane Austen Made Me Do It
Adriana Trigiani, Margaret Sullivan, Jo Beverley and Janet Mullany

Songs Without Words
Ann Packer
Back to Top